We at artinsights are incredibly pleased to once again welcome Michelle St Laurent to the Gallery on July 2nd, to present some beautiful new original interpretive Disney art, and her latest limited editions for the exhibit on display through August 8th. Her inspired art has only become more popular and beautiful since the last time she visited us in 2014, and we’re so excited to present these new images to our clients and friends.

You can meet Michelle, and see some of her new exquisite pieces. She will be personalizing all purchases at the show!

The exhibit of her work will be on display through August 8th, so those two can’t make it this weekend can come through August and enjoy her visual warmth, and her sweet, perfectly rendered style, which has made her they go-to artist for collectors of interpretive Disney scenes.

Check out her work HERE. 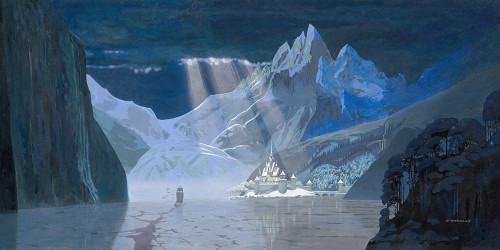 Reston, Va.,  Dec.3rd, 2014 – Michelle St. Laurent will be appearing on Saturday, December 6 from 2:00 p.m. until 6:00 p.m. at ArtInsights Animation & Film Art Gallery in Reston Town Center to paint in person and meet fans and collectors at the opening of the gallery show “The Wonderful World of Disney Animation”.  The exhibit of her original and limited edition art from classic and contemporary Disney films will be on display through January 5, 2015 at ArtInsights, 11921 Freedom Drive, Reston, VA 20190.

St Laurent has become the top selling and most popular female Disney artist in the public eye, but her work is represented all over the world through her work behind the scenes as well.   As a Disney art director, production designer, and product developer, she can claim many firsts, including being part of the team that started and designed the pin trading and Vinyl-mation programs at the Disney parks.  She also designed the “My Disney Girl” doll and the “Create Your Own” ear hat, and was production designer for all park events, which often included designing and implementing temporary themed environments with budgets in the millions of dollars.  She has had the honor of being selected to create postage stamps for Disney, has worked on many projects for both Disney World and Disneyland, and is represented in many official Disney gallery shows. 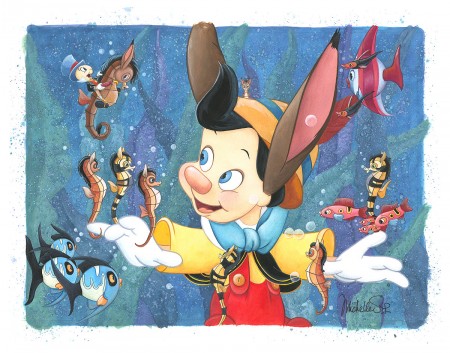 “What makes Michelle St. Laurent so successful is how she mixes traditional and pop art aesthetics in watercolors for her gallery works while at the same time becoming the go-to gal for official art used in projects inside the studio,” says ArtInsights owner Leslie Combemale.  “Few artists can find that balance, and Michelle does that perfectly.”

Watercolor images by St. Laurent from Sleeping Beauty, Pinocchio, The Lion King, The Little Mermaid, and Alice in Wonderland, among others, will be on exhibit and she will be talking about her inspiration and process with collectors at the opening on Saturday.  “I aspire to recreating classic Disney magic in my paintings, which allows each of us to be a kid again,” says Laurent. “This is an especially wonderful time of the year for that, so I love sharing my work and celebrating the holidays meeting collectors and Disney fans!”

Michelle St. Laurent has fulfilled a lifelong dream of being a Disney artist, after creating a poster of Disney characters on parade for a contest in first grade.  Pre-Disney, she worked to create art for Sea World in Orlando, and her murals can be seen throughout the park.  Some 15 years ago she was hired by the Disney Design Group where she created a wide variety of art images for Disney Theme Parks and special projects. She trained, worked and was inspired by Disney legend Ralph Kent for the first 6 years. Michelle began painting for the Disney Galleries in 1998, and started creating both Disney fine art and official art as an art director for the company.  Michelle’s fine art is featured throughout Disney World and Disneyland, Epcot’s Food and Wine Festival, at the exclusive Magic Kingdom’s 999 Happy Haunts Event, Disneyana Conventions, and galleries around the world.

About ArtInsights Animation & Film Art Gallery: Established in 1994, ArtInsights is a privately owned gallery located just outside of Washington, DC at Reston Town Center, in Virginia. The gallery presents important images from the 20th and 21st century film art genre, including original art from the masters of film and moving entertainment. From film campaign artists to concept and layout artists to animators, ArtInsights represents a wide collection from the giants and up and comers of film art. With more than 30 years’ experience, the owners work with their worldwide collector base to build and insure the integrity of their collections. They sell only official art created by artists working on the films they represent, with rare images used in production as well as original commissions which are often used to create official limited editions.  ArtInsights exclusively represents the original art of John Alvin, Casey Robin, and Ben Curtis Jones, and also exhibits Tim Rogerson, Jim Salvati, Mike Kungl, and Chuck Jones. Featured studios include Disney, Warner Bros., Paramount, and 20th Century Fox, in a display of images from the best classic movies and animated features of the last 100 years as well as newer classics like Star Wars, Harry Potter, and Star Trek. See and learn more on the website and on the web magazine, and hear movie reviews by owner Leslie Combemale’s alter ego, Cinema Siren, published on more than 600 Patch sites nationwide, and on  www.artinsightsmagazine.com.

For more information, high-res images or to schedule an interview with artist Michelle St. Laurent and animation and film art expert and gallery owner Leslie Combemale, contact her at  artinsights@gmail.com  or call her in the gallery at 703-478-0778.