I don’t so much hate saying “I told you so”, as quietly revel in the thought of saying it, especially when it comes to the value and popularity of film and animation art.

Remember I was there when no one knew what a cel was, some 30 years ago.  I worked in one of the first five galleries in the world specializing in animation art.  Back then we would routinely hear from casual shoppers, “do you have any real art?” or “is there a fine art gallery in the center?”, and I still field those questions from time to time today.  Of course I feel vindicated that animation art, Disney interpretive art, and film art has become a huge collectible with which most people are familiar.

But the times when I have targeted a particular scene, movie, or character, knowing it would at some point become prohibitively expensive…the times i’ve come perilously close to “hard sell”, because some of my loyal collectors would not be able to afford whatever it was in a few years, when i’m right about THOSE times, that’s when I really think I might be pretty valuable to collectors in those fields.

It isn’t as easy as it sounds.  You’d think with every release of a live action version of a Disney film, the production cels from the original would explode in price, but that isn’t often the case.   You’d also think an artist dying would have immediate impact on value, but that is also only sometimes true.  Often it takes a few years for the art to raise consistently in price.

There have been a few “wins” I can point to, in terms of prognosticating.

For example, when heavyweight Snow White collector Steve Ison sold back a huge percentage of his art to Disney right around the same time they had a show of Snow White and vintage Disney art in Paris and Montreal in which they showed the connection between animation art and fine art, I knew Snow White would become highly collectible in France and the US.   He was also someone who tried to focus on collecting only unrestored art, and i’ve contended that will become a major concern for discerning collectors when in search of vintage art. 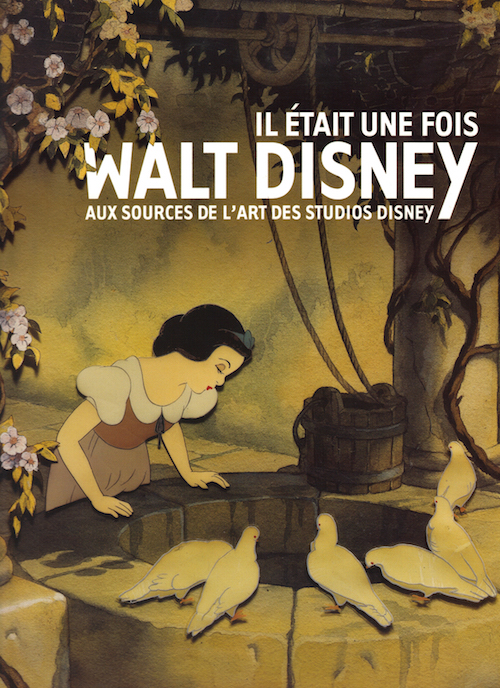 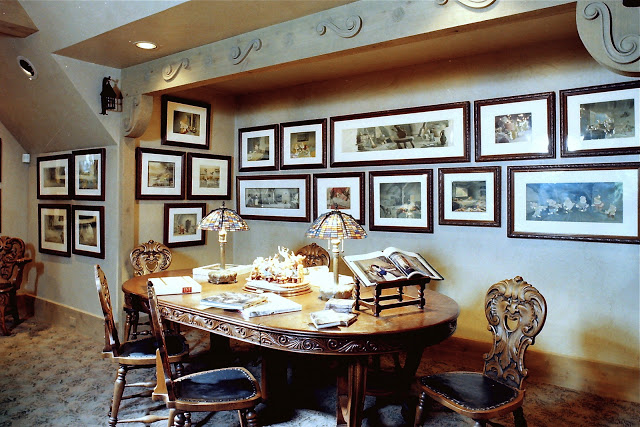 I also knew about how popular interpretive art by Disney art director Toby Bluth was going to be to production art collectors, and sure enough, he was the one interpretive artist they all collected.  Sadly he’s since passed away, and i’m so glad I pushed a lot of my clients to buy his work.  None of them ever want to sell it back and his are often the favorite pieces in their collections.

But the most recent moment that puffed me up like the animation and film art equivalent of a parading peacock is the insane rise in value of cels from The Little Mermaid.  A few years ago when Disney was hurting for quarterly numbers, and they were looking for cash from any corner, they allowed the release of original production cels from The Little Mermaid to the public through galleries.  They were selling them for a fraction of what they had been.  I literally bought 90% of what they were offering.  They even had a few of Ariel on the rock.

Since then, the frenzy for cels of Ariel has continued unabated.  Those who had been expecting to get art from the film for $800 to $2000 often declined purchases, and now, boy are they sorry.  Good cels with official seals from the film are now going for between $3500 and $8000, if they even go on the market.

Cut to Heritage Auctions, and a piece of art from the scene I remember telling ALL my clients they absolutely had to get cels from if they were building a collection representing the whole movie.  Namely, “Naked Ariel”.  I speak of this: 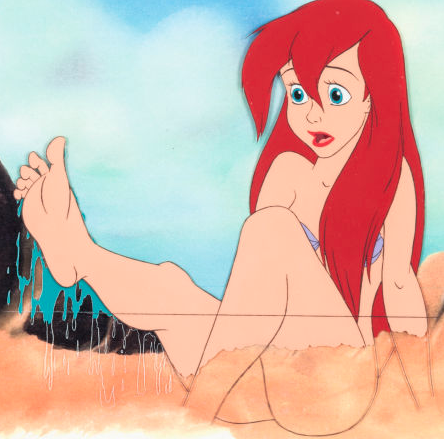 This is the scene when Ariel has just become a human, and has gotten legs.  It isn’t about the fact that she is supposedly around 16 years old.  There are certainly creepy collectors who are into that, but mine aren’t like that.  It’s about the fact that you just don’t see naked animated characters in Disney*.

*The only other naked Disney character is the Harpie from Fantasia, as far as I know:

(you can look them up, but this is a close up of her face) 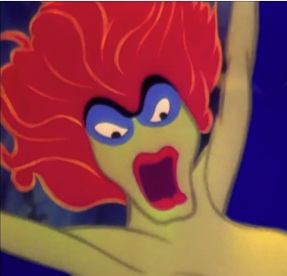 She isn’t supposed to be in the altogether.  She is under the water, which is not shown in the film.  She has registration marks for where the camera frames her.  However, the original drawings of Ariel show her entire body.

The first time I saw a cel like that in 1990, I knew they’d be in high demand, but last month a piece like that went for around $17,000 in the aforementioned auction.  I am pretty sure I sold that piece originally, and for $2500.  I’m not saying that’s the norm, or it wasn’t someone digging in, determined to wind up with the piece regardless of its cost, but that “figure” means at least two collectors were willing to duke it out all the way up to a 15k hammer price.

Auctions these days, when it comes to animation, make me completely crazy.  Backgrounds they say are from the film that aren’t, cels they say aren’t restored, or completely repainted, that are, and a host of other confusingly misrepresented or mis-labeled art makes auctions a strictly “buyer beware” kind of affair.  A lot of long time collectors are well aware of that.

I have a feeling that is why when a cel from The Little Mermaid with a seal shows up, essentially verifying its authenticity and provenance, collectors come from all over the place to try to make it theirs.

When will the escalating prices settle down? It’s very hard to tell.  Anyway, generally these days I save my prognosticating for frequent clients, so that I can level the playing field I share with all these auction houses.

Something has to give a gal the edge.  Being right only helps so much when you’ve already sold all you had.

At least I know about 15 people with what I call “Skinny-dipping Ariel”, and that’s most of the ones out there.

Glad I talked them all into it.  Not that they’ll sell them, but knowing they do makes my big green feathers just a little fluffier.