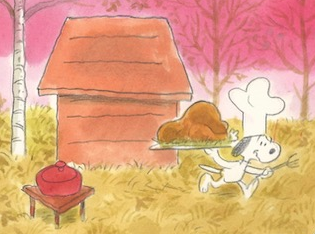 In the fifties, Dean Spille began working with Bill Melendez at Playhouse Pictures, a studio created by innovative artists who made up UPA. Peanuts’ television endorsement of the Ford Falcon, created at Playhouse Pictures, was the beginning of a partnership and friendship that lasted a lifetime for Melendez and Spille. After leaving for Spain in 1963, Dean returned to find that Melendez had created his own studio. Spille worked on the first three specials while teaching design at California State College, Long Beach. Later a sabbatical from teaching took Spille to live and work in a small town in the hills of Provence. Working on “Babar the Elephant” and later “Dick Deadeye”, he also continued working on the Peanuts films, while splitting his time between Los Angeles and France.  A definitive move to France was made as an additional project was in the works, the Emmy winning “The Lion, the Witch and the Wardrobe.” Dean Spille was, without question, an integral contributing artist to the success of Bill Melendez Productions, Inc.

Dean’s academic studies began at UCLA where he earned his BA in Cinema, furthering his studies at California State University earning his Master Degree in Fine Art. Dean continued his studies at the Accademia Delle Belle Arte in Florence, Italy and at Kokoshkaschule in Salzburg, Austria. Dean was also a former professor of Art at the California State University, where he taught Graphic Design and Animation. He spent his later years devoting his time to painting, and selling his traditional imagery throughout Europe, where he is renowned and celebrated for both his animation and fine art works. Dean passed away on March 8th, 2021 after living a life filled with joy and art, and bringing both to fans around the world.