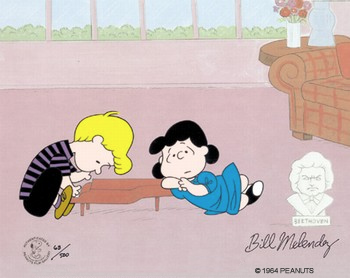 José Cuauhtémoc Meléndez (November 15, 1916 – September 2, 2008), known as Bill Melendez, was a Mexican American character animator, film director, voice artist and producer, known for his cartoons for Walt Disney Productions (working on four Disney films Pinocchio, Fantasia, Dumbo and Bambi), Warner Bros. Cartoons, UPA and the Peanuts series. Melendez provided the voices of Snoopy and Woodstock in the latter as well. Bill Melendez was the only person Peanuts creator Charles M. Schulz trusted to turn his popular comic creations into television specials. He and his studio worked on every single television special and direct-to-video film for the Peanuts gang and Melendez directed the majority of them. He even provided the vocal effects for Snoopy and Woodstock in every single production, voice acting the characters in the studio by uttering gibberish, and the voices were mechanically sped up at different volumes to represent the two different characters. According to a New York Times article shortly after his death, Melendez did not intend to do voice acting for the two characters. "Schulz would not countenance the idea of a beagle uttering English dialogue, Mr. Melendez recited gibberish into a tape recorder, sped it up and put the result on the soundtrack.“ He also directed, did the animation for, and provided voice acting in the first four Peanuts theatrical films, A Boy Named Charlie Brown (1969), Snoopy, Come Home (1972), Race for Your Life, Charlie Brown (1977), and Bon Voyage, Charlie Brown (1980). The last Peanuts-related production he worked on was He's a Bully, Charlie Brown (2006). Melendez and Lee Mendelson, who also worked on the Peanuts specials, films, and TV shows, formed their own production team and did other animated specials. They were responsible for the first two Garfield animated specials, Here Comes Garfield (1982) and Garfield on the Town (1983), as well as Frosty Returns (1992), the pseudo-sequel to Rankin/Bass' Frosty the Snowman (1969).
Read More about Bill Melendez