All By Official Studio Artists

Reston, VA -You’ve seen “alternative posters” and “minimalist posters”, but what about art by the folks who actually helped you fall in love with the movies in the first place? Somebody has to champion them, and that would be you and us! That’s right! A movie lovers gift guide that is all art by the folks who make movies and promote them! Artinsights certainly has perfectly timed for what’s happening in pop culture this holiday season, all with art that is not only officially licensed, but created by studio artists.  Steamboat Willie has its 90th anniversary on November 18th, and Yellow Submarine turns 50 on November 13th.  Both Disney and Warner Bros. have highly-anticipated tentpole films releasing in December, with Mary Poppins Returns landing in theaters December 19th, and Aquaman swimming to screens on December 14th.  ArtInsights Gallery has art representing all these properties, making  holiday gift giving easy for the loved ones of fans who search in vain every year for something special and unusual to make the season bright.  Prices range from $150 to a king’s ransom, with several highlighted pieces in the lower range to keep budgets in mind.

No movie lovers gift guide would be complete without less expensive art! There is a page on their site with a selection of dozens of pieces below $250. (https://artinsights.com/production/santas-little-helpers-presents-for-christmas-hanukkah-yule-kwanzaa-under-250/)

Fans of Mickey Mouse and the Beatles have been celebrating all year. Yellow Submarine returned to theaters this summer, and there’s a new graphic novel release of the story.  Disney is having what they’re calling the “world’s biggest mouse party”, and have a new exhibit in New York called “Mickey: The True Original Exhibition”.  ArtInsights is ready for those with friends and family who are fans, with official art by Alex Ross featuring the Beatles called “The Fab Four “ in a limited edition mini canvas for $150.

Mickey Mouse as Steamboat Willie reminds Disneyphiles where it all began.  For them, the gallery suggests one of two limited editions by highly-collectible Disney artist Tim Rogerson, one a giclee on canvas featuring Mickey through the years called “Mickey’s Creative Journey” priced at $150, the other a hand-signed giclee on paper capturing the character in a grey-toned piece called “Mickey at the Helm” for $350.

Mary Poppins, starring Emily Blunt, directed by Rob Marshall, promises to be a huge hit, especially with fans of the Oscar-winning 1964 classic.  The gallery has a limited edition signed by Tim Rogerson called “A Mary Tune”,  that shows Mary and her cohorts painted against the sheet music for Feed the Birds, written by the Sherman Brothers, who won an Oscar and Grammy for Mary Poppins. It is priced at $495.  Also offered, for the fans who have everything, is art by matte background painter Peter Ellenshaw, who, indeed won an Oscar for his work on the film. “Practically Perfect”, which is signed by Ellenshaw, who passed away in 2007, is $1100, and would be a highlight of any Disney film fan’s collection.

For Aquaman, the gallery has an image created by famed DC and Justice League Unlimited animation director Bruce Timm, which includes not only Aquaman, but many of the members of the Justice League, including Superman, Wonder Woman, and Batman, all of whom have been making news in live action studio news this year, called “Guardians of Justice”. Also suggested is a giclee on canvas by DC comic book cover artist Alex Ross that features Aquaman with the lead members of the Justice League called “JLA”.  Both retail for $150.

There are a number of other pieces corresponding to film art news, including art from Pinocchio, which was recently announced as a property Guillermo Del Toro will reinterpret with a new stop-motion film. Whether purists strictly stick with the original Harry Potter series, or love the newest releases written by Rowling, art from the Harry Potter book and film series is alway popular, and coincides with  Fantastic Beasts: The Crimes of Grindelwald.  Many are created by Stuart Craig, the production designer for all the Harry Potter movies as well as the new Fantastic Beast series.

There are a number of images by Star Wars production artists, including the limited edition “The Cold of Hoth” by John Alvin, an exclusive giclee on paper for $150 from everyone’s favorite film in the saga, as well as images representing DC and Marvel characters.  Of course, there is a veritable parade of Disney princesses represented in art, which is perfectly timed with the release of Ralph Breaks The Internet, in which the Disney princesses figure prominently, (including the use of the voices from the original feature films!)  You can find all these options on the gallery’s new blog.  See the bottom of the press release for links or contact the gallery for more information. Images of available art sent immediately upon request.

Since 1994, representing a wide range of film and animation art at the gallery in Reston Town Center, ArtInsights focuses on proprietary projects and artist representation relating to the history of animation and film, and the celebration and examination of popular culture, all by artists working in the film industry. With artists like iconic movie poster artist John Alvin, studio concept artists William Silvers and Jim Salvati, and Marvel and DC cover artists Alex Ross, the gallery builds collections of original and limited edition art for their growing worldwide collector base. See the work and read the blog on  HYPERLINK “http://www.artinsights.com” www.artinsights.com. For more information about ArtInsights’ 2018 gift guide, go to https://artinsights.com/the-artinsights-2018-gift-guide-celebrates-film-anniversaries-and-new-releases/

“Willie at the Helm” by Tim Rogerson https://artinsights.com/product/willie-at-the-helm-mickey-mouse-steamboat-willie-giclee-on-paper-by-tim-rogerson/

“The Cold of Hoth” by John Alvin: https://artinsights.com/product/star-wars-the-cold-of-hoth-giclee-on-paper-by-john-alvin/

“Journey on the Hogwarts Express” by Stuart Craig: https://artinsights.com/product/journey-on-the-hogwarts-express-harry-potter-giclee-on-paper-by-stuart-craig/ 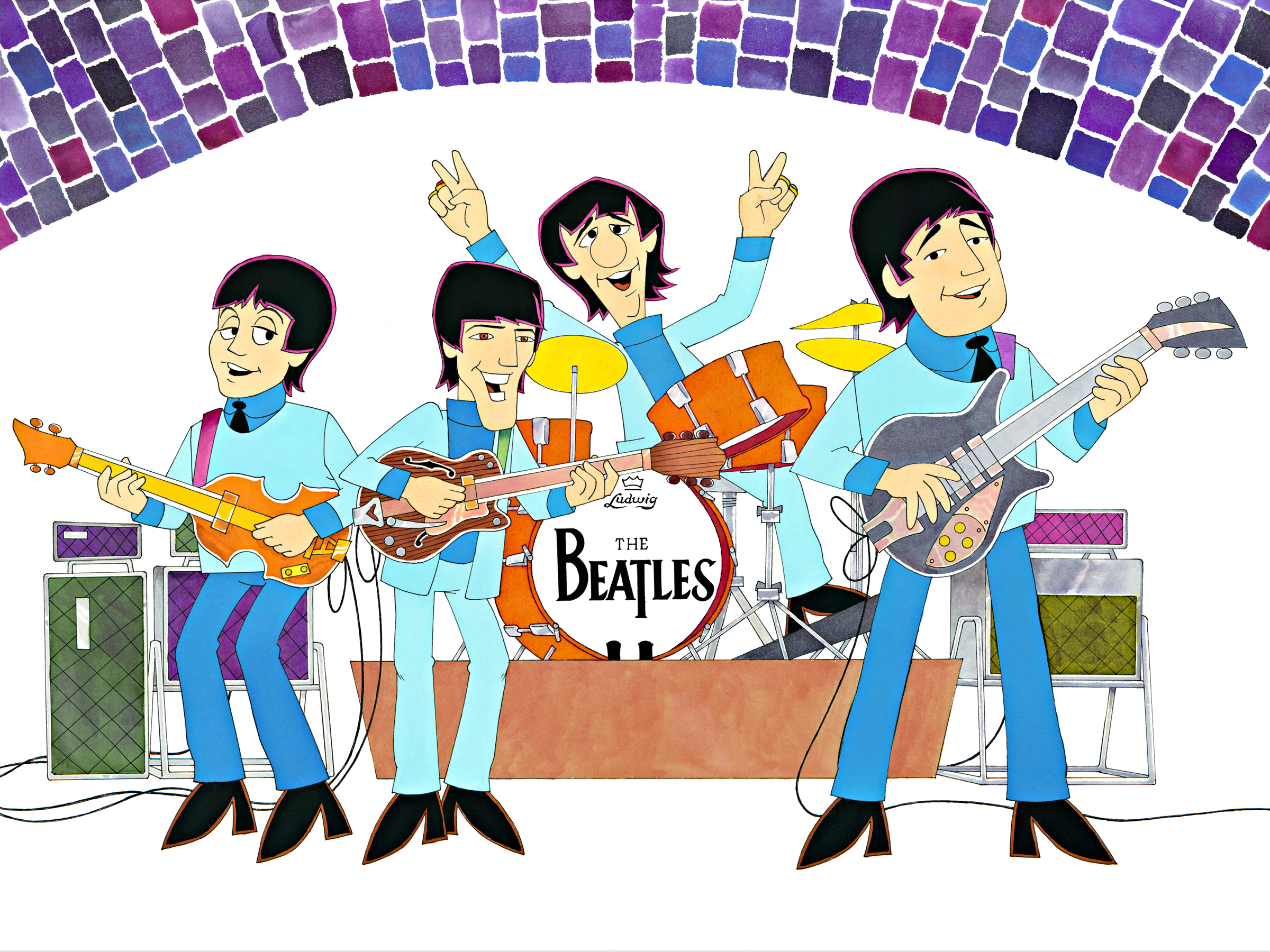 In 1964 the Beatles invaded the United States, performing for 73 million people on the Ed Sullivan Show and dominating the US pop charts for years. Now over five decades later, the Fab Four continue to be the most celebrated musical group in Rock history. And Beatlemania is alive and well….just this month, the Beatles released a live CD of their Hollywood Bowl concerts and director Ron Howard premiered a documentary on the Fab Four’s touring years!

Ron Campbell, director of the 1960’s Saturday Morning Beatles Cartoon series and animator of the Beatles film Yellow Submarine will make a rare personal appearance at ArtInsights, 11921 Freedom Drive in the Reston Town Center in Reston, VA, Friday, September 23rd through Sunday, September 25th. Ron will showcase his original Beatles cartoon paintings created specially for the show and create new Beatles pop art paintings at the exhibit. The exhibit is free and all works are available for purchase.
Who: Ron Campbell, Director of the Beatles 1960’s Saturday Morning Cartoon series and animator of film Yellow Submarine. Also involved in Scooby Doo, Rugrats, Smurfs, Winnie the Pooh, Flintstones, Jetson’s, George of the Jungle, Teenage Mutant Ninja Turtles and many others.

What: Ron Campbell will be offering for sale original cartoon paintings of the Beatles both in their ABC Cartoon and Yellow Submarine roles as well as various other works from his 50 year career in animation including Scooby Doo, Smurfs, Rugrats and more.

Saturday morning Beatles Cartoon series that aired on ABC from September 25, 1965 through April 20, 1969 and animator on the Beatles film Yellow Submarine will make a rare personal appearance at ArtInsights, 11921 Freedom Drive in the Reston Town Center, Reston VA for 3 days only.
The Saturday Morning Beatles Cartoon series received monstrous ratings in its time slot….a 67 share! The cartoon series debuted on ABC on September 25th 1965….exactly 51 years ago this weekend! It continually fueled new music to the young kids of America as they followed the bouncing drumstick to each Beatles tune. Campbell also wrote the forward to the definitive book on the Beatles cartoon series “Beatletoons.”

Yellow Submarine, recently celebrating its 47th anniversary, has become a permanent fixture in pop culture, defining the psychedelic 60s for generations to come. In his book, Up Periscope, Yellow Submarine Producer Al Brodax gives Ron Campbell a great deal of credit for saving the movie and tying it all together at the last minute.

Campbell has also been involved with some of the most beloved cartoons including, Scooby Doo, Winnie The Pooh, Krazy Kat, George of the Jungle, The Jetsons, The Flintstones, the Smurfs, Goof Troop, Rugrats, Ed, Edd & Eddy and dozens more. Campbell’s former studio was awarded a Peabody and an Emmy for his work in children’s television. Since retiring after a 50 year career, he has been painting subjects always based on the animated cartoons he has helped bring to the screen. With particular emphasis on The Beatles, he shows his Cartoon Pop Art in galleries worldwide.

About ArtInsights: Open and representing a wide range of film, animation, and contemporary art at their gallery in Reston Town Center since 1994, ArtInsights focuses on proprietary projects and artist representation relating to the history of animation and film, and the celebration and examination of popular culture. With artists like John Alvin, Alex Ross, Jim Salvati, and Tennessee Loveless, the gallery builds collections of original and limited edition art for their growing worldwide collector base. They were among the first galleries to welcome the art of Ron Campbell over a decade ago, and look forward to bringing his entire collection to fans across the region! See their work and read their blog on www.artinsights.com and www.artoutsiders.net