In honor of the Women’s March in Washington on inauguration weekend, we are offering some rare Wonder Woman original production art from Justice League. They are drawings, as they didn’t use cels in the animation, and we don’t have a bunch, but the 8 we have are all wonderful, kick-ass, and represent the character well!  CHECK THEM OUT HERE.  We will only have them this weekend, so now is the time!

Many of you know we have a large contingent of collectors and art and animation fans meeting up at the gallery and going in to march on Saturday.  That’s not to say we don’t love our ‘Right-minded’ collectors, but we all have to walk our walk as WELL as talk our talk, and that is particularly true to those of us in art and small business.

Those of us who are marching, and those supporting those who will be there certainly need inspiration and motivation, and this demigoddess is the Amazonian to give it!  A percentage of all sales this weekend will benefit Planned Parenthood.  CELEBRATE POWER and THE WONDER OF WOMANHOOD this weekend!

Also, all the art available for purchase is benefitting women-owned small businesses: both in the retail and wholesale!  We are working with the lovely and hard-working Ruth Clampett of Clampett Studio, and her cohort Michelle Smart, who handles production art for them.  I, Leslie Combemale, CRAZY FEMINIST ART LOVER, co-own ArtInsights (as you know)…Plus you will also be supporting low cost healthcare for women around the country.  So what are you waiting for? Lasso yourself a great new piece of art 🙂

THE ART OF JIM LEE

In deciding to have a Batman v Superman art show with the official art of DC, several things were at play.  As Cinema Siren, the film critic, I am inundated with press info and notes and EPK (electronic press kit) about the upcoming movie, which is being released late March (as many fans know!), but I also have a pretty longstanding history with Zack Snyder, because I interviewed him years ago, went for a nature walk with him, and talked Joseph Campbell, womanpower, and the love of classic movies with him.  This was way before he got tapped to do any superhero movies, and I can tell you, whatever you opinion of him as a director, as a guy, he’s pretty down to earth and quite fabulous.  So while I have to watch the movie with an unjaundiced and unbiased eye, I can promote the theory of all things Batman, Superman, and Wonder Woman all I want, because like they say about parties and crying, it’s my gallery and i’ll pimp DC if I want to!

It’s been a while since Warner Brothers gave over the rights to selling their DC images to my friend Ruth. She used to work for them directly, helped start up and run the Warner Brothers stores, and then for all the galleries around the world became the one and only source for the official art of DC.

What I’ve always loved about Ruth and Clampett Studio Collections is Ruth has always felt strongly about keeping the artists representing DC, along with any other WB properties she represents, as artists who actually have a hand in the making of the shows and movies. As such, the art of Jim Lee was essential to the collection.

Jim Lee is a Korean American comic book artist, writer, editor, and publisher. He started out his adult career plans with begrudgingly working towards becoming a medical doctor at Princeton, as his family wished, but he had always loved comics. His high school classmates even predicted in his senior yearbook he would found his own comic book company.

During college he took an art class and started reading comics again, and that got him excited enough he committed himself to one year’s try at being a professional comic book artist. When Archie Goodwin of Marvel invited him to work for them, he embarked on a career that led to multiple awards, building an enthusiastic and loyal fanbase, starting his own comic imprint, and ultimately becoming the co-publisher of DC. He is in the Guinness World Records for creating the best-selling comic book of all time.

In my research for writing about Jim Lee, I discovered he has had nine children with his wife Carla. How on Goddess’s green earth does he have any time to do anything? I have to say one of the most impressive things about Jim, given the many balls he has in the air at any given moment, is that when fans are talking to him, they really feel he’s listening and paying attention to them. He’s always been one of the best artists to meet at any con for that reason and because he seems to embody the joy of being an artist in every inch of his being. He is also an inspiration to anyone who wants to be a successful artist, because as an artist he worked his way up to being at the top of one of the biggest comic book companies in the world.

There are some very choice limited editions available signed by Jim Lee in our show. I would never have an exhibit and sale of DC art without his work.

Here are some of my favorites: 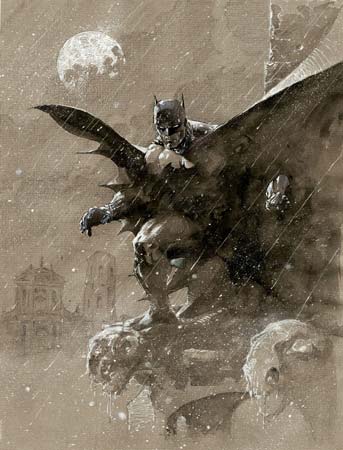 BATMAN OVER SAN PROSPERO:
This piece was inspired by the Modena landscape in Italy, a country that is dear to Jim’s heart. He spends time there every year. This image was featured in “Jim Lee Millennium Edition,” a compilation of images from Jim Lee’s career. 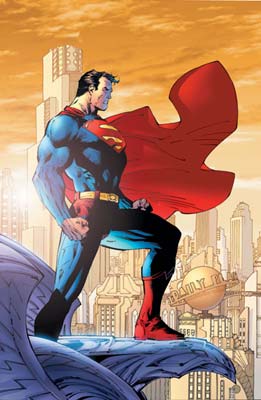 This image was used for a cover to the Superman Adventures series. I love Superman. I think you’re either a lover or a hater. I just found out recently that Superman didn’t start out flying. It was only later that they wrote in that he could, even though now it’s one of his most recognizable powers.

There was a great interview with the writer of a book called “Superman: The High-Flying History of America’s Most Enduring Hero” and I learned lots about the character that someone who doesn’t read every comic would find fascinating. I also didn’t know he was originally “The Man of Tomorrow”…so I guess this art comes by its title honestly!

Also, the really great editor at DC who has lots to do with what happens to and with Superman, Mike Carlin, recommends SUPERMAN LIVES, an audio CD. BUY IT THIS SECOND! (and you can buy some of our art as well, but yes. Superman on CD? OH YESSS!) 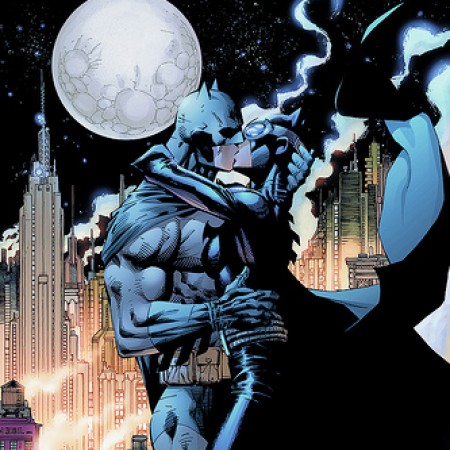 This is a great piece to me because when I met and hung out with Jim, he drew me a great little Catwoman, where she is holding a Batman toy and saying MEOW. I thought this piece was super hot, and love the color of it, and the composition. I also love that it’s on t-shirts and mugs and such, and yet it’s actually possible to have a limited edition of it signed by Jim Lee, and they never add any numbers to a sold-out edition, so the fact that it’s $425 and there are only 250 of them is a bit mind boggling to an art gallery geek like me. The image appeared first in the Batman comic “In the Mouth of Madness.”

Last but not least of my favorites, this giclee on canvas has only 100 pieces, and it’s so badass of all the art by Jim Lee i’d want this one. For better or worse, my eyes go immediately to Wonder Woman and stay there. I love that she looks without question that she can hold her own with the other two heroes, although I haven’t read the Trinity series…This piece was the cornerstone of our show, because it so captures the anticipation of the Batman v Superman feature film coming soon to theaters.

While I prefer Wonder Woman from the World War II era, I’ll make an exception for Jim’s work. For more information and the history of Wonder Woman CLICK HERE.

We hope to see you at ArtInsights you soon so we can geek out together about these superheroes, or so you can correct one or all of us about something they did, said, or wore 😉