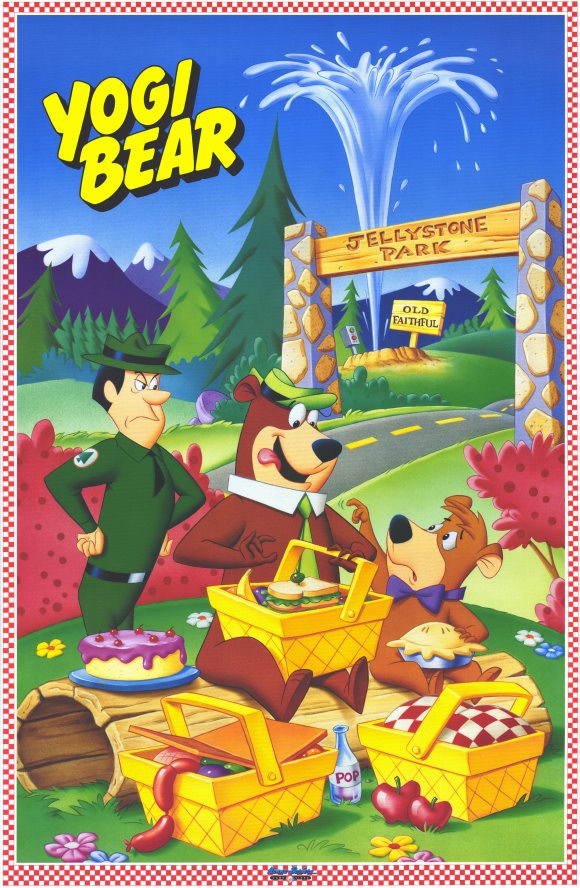 Yogi Bear is a family cartoon character, created by Hanna-Barbera Productions, who has appeared in numerous comic books, animated television shows and films. He made his debut in 1958 as a supporting character in The Huckleberry Hound Show. Yogi Bear was the first breakout character created by Hanna-Barbera and was eventually more popular than Huckleberry Hound. In January 1961, he was given his own show, The Yogi Bear Show, sponsored by Kellogg's, which included the segments Snagglepuss and Yakky Doodle. Hokey Wolf replaced his segment on The Huckleberry Hound Show. A musical animated feature film, Hey There, It's Yogi Bear!, was produced in 1964. Like many Hanna-Barbera characters, Yogi's personality and mannerisms were based on a popular celebrity of the time. Art Carney's Ed Norton character on The Honeymooners was said to be Yogi's inspiration. His voice mannerisms broadly mimic Carney as Norton. The plot of most of Yogi's cartoons centered on his antics in the fictional Jellystone Park, a takeoff on the famous Yellowstone National Park. Yogi, accompanied by his constant companion Boo-Boo Bear, would often try to steal picnic baskets from campers in the park, much to the displeasure of Park Ranger Smith. Yogi's girlfriend, Cindy Bear, sometimes appeared and usually disapproved of Yogi's antics. Besides often speaking in rhyme, Yogi Bear had a number of catchphrases, including his pet name for picnic baskets ("pic-a-nic baskets") and his favorite self-promotion ("I'm smarter than the av-er-age bear!"), although he often overestimates his own cleverness. Another characteristic of Yogi was his deep and silly voice. He often greets the ranger with a cordial, "Hello, Mr. Ranger, sir!" and "Hey there, Boo Boo!" as his preferred greeting to his sidekick, Boo Boo. Yogi would also often use puns in his speech, and have a habit of pronouncing large words with a long vocal flourish.
Read More about Yogi Bear (1961-1991)