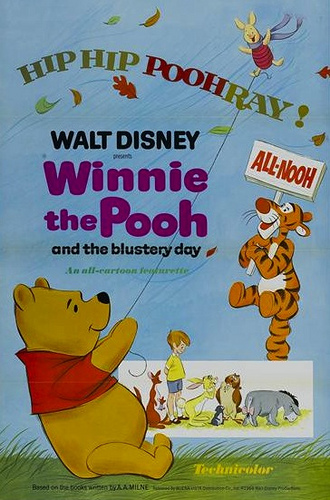 At the beginning of the story, Gopher tells Winnie the Pooh that it is "Winds-day" (a play on "Wednesday"), whereupon Pooh decides to wish everybody "Happy Winds-day." He visits his friend Piglet, who wears a scarf around his neck on this day. Piglet is blown into the air, his scarf unraveling all the while, and Pooh grabs hold of him. As they fly like a kite through the air over the other characters' heads, Pooh wishes Kanga, Roo, Eeyore, Rabbit, and Owl a happy Winds-day. However, once they arrive at Owl's treehouse, he informs them that the wind is due to "a mild spring zephyr" rather than to a particular holiday. During the windstorm, Owl's house is knocked down, so Eeyore volunteers to house-hunt for Owl. That night, Pooh hears an unfamiliar noise coming from elsewhere in the Hundred Acre Wood. Someone knocks on Pooh’s door, then Tigger bounces inside in search of something to eat. He tries some honey but decides, "Yuck! Tiggers don't like honey." Before leaving Pooh's house, Tigger tells him that there are Heffalumps and Woozles in the forest that steal honey, Pooh's favorite food. After which, he says goodbye and bounces off. Pooh, frightened by Tigger's tale, takes it upon himself to guard his honey, but eventually falls fast asleep. As he is sleeping, Pooh has a nightmare in which Heffalumps and Woozles steal his honey while the song "Heffalumps and Woozles" plays.

Later that night, a storm floods the Hundred Acre Woods, and Piglet becomes trapped in his home. He writes a bottle-note for help just before the waters carry him away riding a chair. Pooh is trapped in a honey pot and floats away from his home as well. The remaining characters gather at Christopher Robin's house, and Christopher reads the message. He then sends Owl to inform Piglet of a rescue plan in the works, but just after he delivers the news, Piglet and Pooh are mixed up in a waterfall which switches Piglet to the honey pot and Pooh to the chair. When they arrive together at Christopher Robin's house, he mistakenly thinks that Pooh rescued Piglet, and throws a hero party for Pooh. During the party, Eeyore announces that he has found a new home for Owl. When he leads the gang to Piglet's house, the others are shocked and try to tell Eeyore that Piglet already lives there. However, Piglet decides to reluctantly give his home to Owl, and Pooh offers to let Piglet live with him. Pooh suggests to Christopher Robin that the hero party should become a two-hero party because of Piglet's generosity. He agrees, and the characters celebrate both Pooh’s and Piglet's good deeds that day.

Read More about Winnie the Pooh and the Blustery Day (1968)