UP Original and Limited Edition Art (2009) 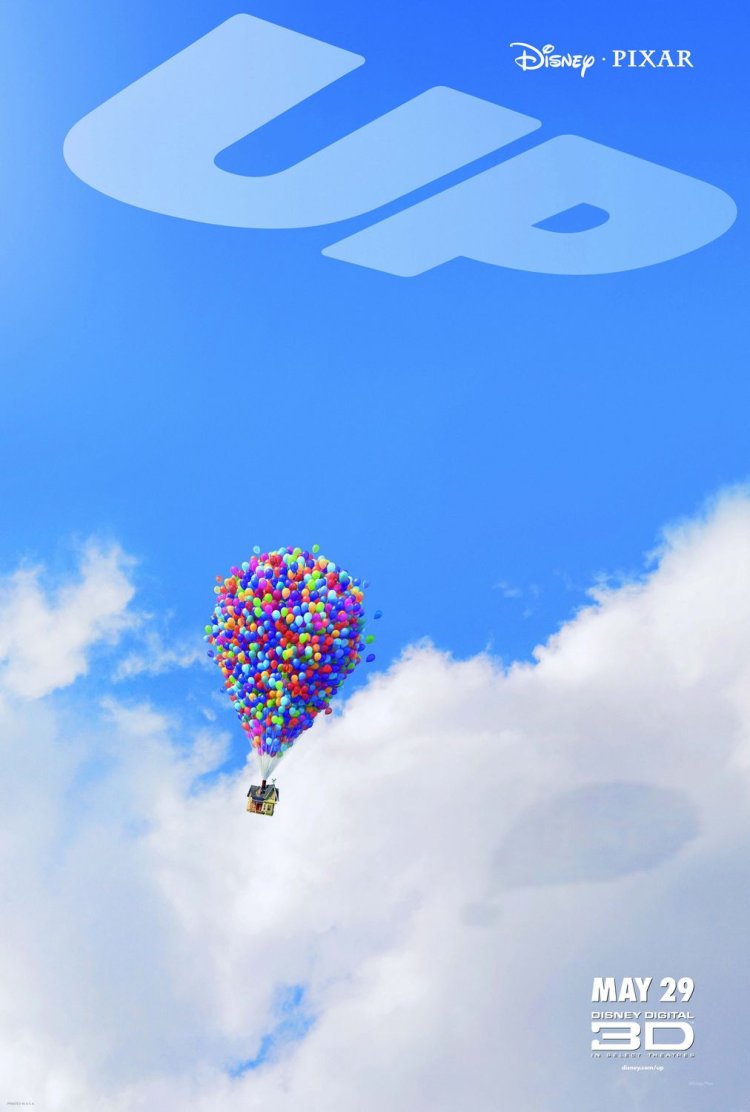 In Up, young Carl Fredricksen is a shy, quiet boy who idolizes renowned explorer Charles F. Muntz. He is saddened to learn, however, that Muntz has been accused of fabricating the skeleton of a giant bird he had claimed to have discovered in Paradise Falls, South America. Muntz vows to return there to capture one alive. One day, Carl befriends an energetic and somewhat eccentric tomboy named Ellie, who is also a Muntz fan. She confides to Carl her desire to move her "clubhouse"—an abandoned house in the neighborhood—to a cliff overlooking Paradise Falls, making him promise to help her. Carl and Ellie eventually get married and grow old together in the restored house, working as a toy balloon vendor and a zookeeper, respectively. Unable to have children, they repeatedly pool their savings for a trip to Paradise Falls, but end up spending it on more pressing needs. An elderly Carl finally arranges for the trip, but Ellie suddenly becomes ill and dies, leaving him alone.

Some time later, Carl still lives in the house, now surrounded by urban development, but he refuses to sell. He ends up injuring a construction worker over his damaged mailbox. He therefore is evicted from the house by court order and ordered to move to a retirement home. However, Carl comes up with a scheme to keep his promise to Ellie: he turns his house into a makeshift airship, using thousands of helium balloons to lift it off its foundation. A young member of the "Wilderness Explorers" (a fictional youth organization analogous to the Boy Scouts of America) named Russell becomes an accidental passenger, having pestered Carl earlier in an attempt to earn his final merit badge, "Assisting the Elderly."

After surviving a thunderstorm, the house lands near a large ravine facing Paradise Falls. Carl and Russell harness themselves to the still-buoyant house and begin to walk it around the ravine, hoping to reach the falls before the balloons deflate. They later befriend a tall, colorful flightless bird (whom Russell names "Kevin") trying to reach her chicks, and then a dog named Dug, who wears a special collar that allows him to speak.

Carl and Russell encounter a pack of dogs led by Alpha, and are taken to Dug's master, who turns out to be an elderly Charles Muntz. Muntz invites Carl and Russell aboard his dirigible, where he explains that he has spent the years since his disgrace searching Paradise Falls for the giant bird. When Russell innocently reveals his friendship with Kevin, Muntz becomes disturbingly hostile, prompting the pair, Kevin, and Dug to flee, chased by Muntz's dogs. Muntz eventually catches up with them and starts a fire beneath Carl's house, forcing Carl to choose between saving it or Kevin. Carl rushes to put out the fire, allowing Muntz to take the bird. Carl and Russell eventually reach the falls, but Russell is angry with Carl.

Settling into his home, Carl is sadly poring over Ellie's childhood scrapbook when, to his surprise, he finds photos of their married life and a final note from Ellie thanking him for the "adventure" and encouraging him to go on a new one. Reinvigorated, he goes to find Russell, only to see him sailing off on some balloons to save Kevin. Carl empties the house of his furniture and possessions and pursues him.

Russell is captured by Muntz, but Carl manages to board the dirigible in flight and free both Russell and Kevin. Muntz pursues them around the airship, finally cornering Dug, Kevin, and Russell inside Carl's tethered house. Carl lures Kevin out through a window and back onto the airship with Dug and Russell clinging to her back, just as Muntz is about to close in; Muntz leaps after them, only to snag his foot on some balloon lines and fall to his death. Snapped from its tether, the house descends out of sight through the clouds, which Carl accepts as being for the best.

Carl and Russell reunite Kevin with her chicks, then fly the dirigible back to the city. When Russell's father misses his son's Senior Explorer ceremony, Carl proudly presents Russell with his final badge: the grape soda cap that Ellie gave to Carl when they first met. The two then enjoy some ice cream together, sitting on the curb outside the shop as Russell and his father used to do, with the dirigible parked nearby (over a handicapped parking space, in keeping with the elderly motif). Meanwhile, Carl's house is shown to have landed on the cliff beside Paradise Falls, as promised to Ellie.