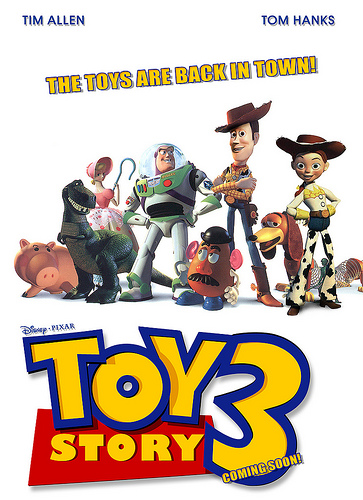 Toy Story 3 is a 2010 American 3D computer-animated comedy-drama film, and the third installment in the Toy Story series.[2] It was produced by Pixar and released by Walt Disney Pictures. Directed by Lee Unkrich, Woody, Buzz Lightyear and the rest of Andy’s toys are as fun and adventurous as always, but none of them can deny that things in Andy’s room have changed.  Andy is seventeen now and just three days away from heading off to college. Andy's mom accidentally throws away a bag with them in it. All convinced it was on purpose save for Woody, the gang go in a donation box destined for Sunnyside Daycare.Andy's toys are welcomed by the other toys at Sunnyside, and are given a tour of the seemingly idyllic play-setting by Lots-O'-Huggin' Bear("Lotso"), Big Baby, and Ken, with whom Barbie falls in love. All of the toys choose to stay, except Woody, who attempts to return to Andy, but is instead found by Bonnie, one of the Sunnyside students. She takes Woody home and plays with him along with her other toys, which are well-treated. Meanwhile, at Sunnyside, a group of toddlers play roughly with Andy's toys. Find out what happens to the beloved toys when they’re compelled to leave Andy’s room behind and embark on an all-new comedic adventure in “Toy Story 3.” Toy Story 3 became the second Pixar film (after Up before it) and third animated film overall (after Beauty and the Beast and Up) to receive anAcademy Award nomination for Best Picture. It received four more Academy Award nominations for Best Adapted Screenplay, Best Sound Editing, Best Animated Feature and Best Original Song, winning the latter two.[5] Toy Story 3 grossed over $1 billion worldwide, becoming thehighest-grossing film of 2010—both in North America and worldwide—and the fifth-highest-grossing film at the time of its release, as well asthe third highest grossing animated film of all time and the first animated film to generate $1 billion in ticket sales.
Read More about Toy Story 3 (2010)