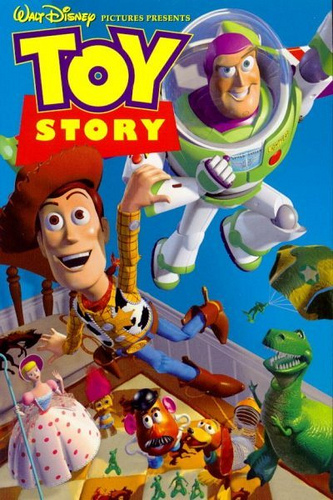 Woody, a pull-string cowboy doll is the leader of a group of toys that belong to a boy named Andy and come to life whenever humans are not present. With his family moving home and one week before his birthday, the toys stage a reconnaissance mission to discover Andy's new presents. Andy receives a space ranger Buzz Lightyear action figure, whose impressive features soon see him replacing Woody as Andy's favorite toy. Woody is disappointed and resentful at his replacement, while Buzz does not understand that he is a toy, believing himself to be a real space ranger, and sees Woody as an interference in his mission to return to his "home planet".

Andy prepares to go to a family outing at the space themed Pizza Planet restaurant with Buzz. Woody attempts to have Buzz misplaced, but ends up knocking him out the window, causing the other toys to think that Woody tried to get rid of him. With Buzz missing, Andy takes Woody with him to Pizza Planet instead. Buzz, however, climbs aboard the car and confronts Woody as they stop at a gas station. The two toys fight and accidentally land outside the car, which drives off and leaves them stranded. Woody spots a truck bound for Pizza Planet and plans to rendezvous with Andy there, convincing Buzz to come with him by telling him it will take him to his home planet. Once at Pizza Planet, Buzz makes his way into a claw game machine shaped like a spaceship, thinking it to be the ship Woody promised him. While Woody clambers in to try and rescue him, they are captured by Andy's neighbor, the toy-destroying Sid Phillips.

At Sid's house, the two desperately attempt to escape before Andy's family's moving day, encountering nightmarish mutant toys as well as Sid's vicious dog Scud. Buzz sees a commercial for Buzz Lightyear action figures just like himself and realizes that he is a toy, becoming too depressed to participate in Woody's escape plan. Sid prepares to destroy Buzz by strapping him to a rocket, but is delayed by a thunderstorm. Woody convinces Buzz that life is worth living even if he is not a space ranger because of the joy he can bring to children. Buzz regains his spirit, but Sid takes him to his backyard. Cooperating with Sid's mutant toys, Woody stages a rescue of Buzz and scares Sid off by coming to life. However, the two miss Andy's car as it drives away to his new house.

Running out on the road, they manage to climb onto the moving truck but Scud chases them and Buzz tackles the dog to save Woody. Woody attempts to rescue Buzz with Andy's RC but the other toys, who still distrust him, toss him off onto the road. However, spotting Woody driving RC back with Buzz alive and well, they realize their mistake and try to help them into the truck. When RC's batteries become depleted, Woody ignites the rocket on Buzz's back and manages to throw RC into the moving truck just as the duo go soaring into the air. Buzz then opens his wings to cut himself free of the rocket moments before it explodes, and he and Woody drop safely through the car's open roof into a box on the rear seat. Andy looks in the box and is elated to find Buzz and Woody, who he assumes must have been there the whole time he thought they were lost.

On Christmas Eve at the new house, a reconciled Buzz and Woody stage another reconnaissance mission to prepare for the new toy arrivals, one of the new toys being a Mrs. Potato Head. As Woody jokingly asks what might be worse than Buzz, the two share a worried smile as they discover Andy's new gift to be a puppy.
Read More about Toy Story (1995)