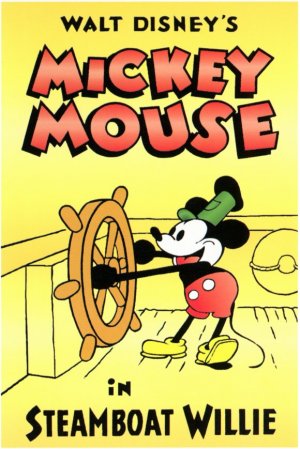 Mickey Mouse pilots a river steamboat, suggesting that he himself is the captain. He cheerfully whistles "Steamboat Bill" and sounds the boat's three whistles. Soon the real captain appears (Pete) and angrily orders Mickey off the bridge. Mickey makes a Bronx cheer at Pete, and then Pete kicks him, making him fall down the stairs, slip on a bar of soap on the boat's deck and land in a bucket of water. A parrot makes fun of him, and Mickey throws the bucket over the bird.

Now piloting the steamboat himself, Pete bites off some chewing tobacco and spits into the wind. The spit flies backward and rings the boat's bell. Amused by this Pete spits again, but it hits him in the face.

The steamboat makes a stop at "Podunk Landing" to pick up a cargo of various livestock. Just as they set off again, Minnie appears, running to catch the boat before it leaves. Mickey does not see her in time, but she runs after the boat along the shore and Mickey takes her on board using the cargo crane.

Landing on deck, Minnie accidentally drops a guitar and some sheet music for the song "Turkey in the Straw" which are eaten by a goat. The two mice use the goat's body as a phonograph which they play by turning the animal's tail like a crank. Mickey uses various objects on the boat as percussion accompaniment and "plays" the animals like musical instruments.

Finally an unamused Captain Pete appears and puts Mickey to work peeling potatoes. In the potato bin, the same parrot from before appears in the port hole and mocks Mickey again. The mouse throws a partially peeled potato at him, knocking him into the river below. The film ends with Mickey laughing at the sound of the bird struggling in the water.