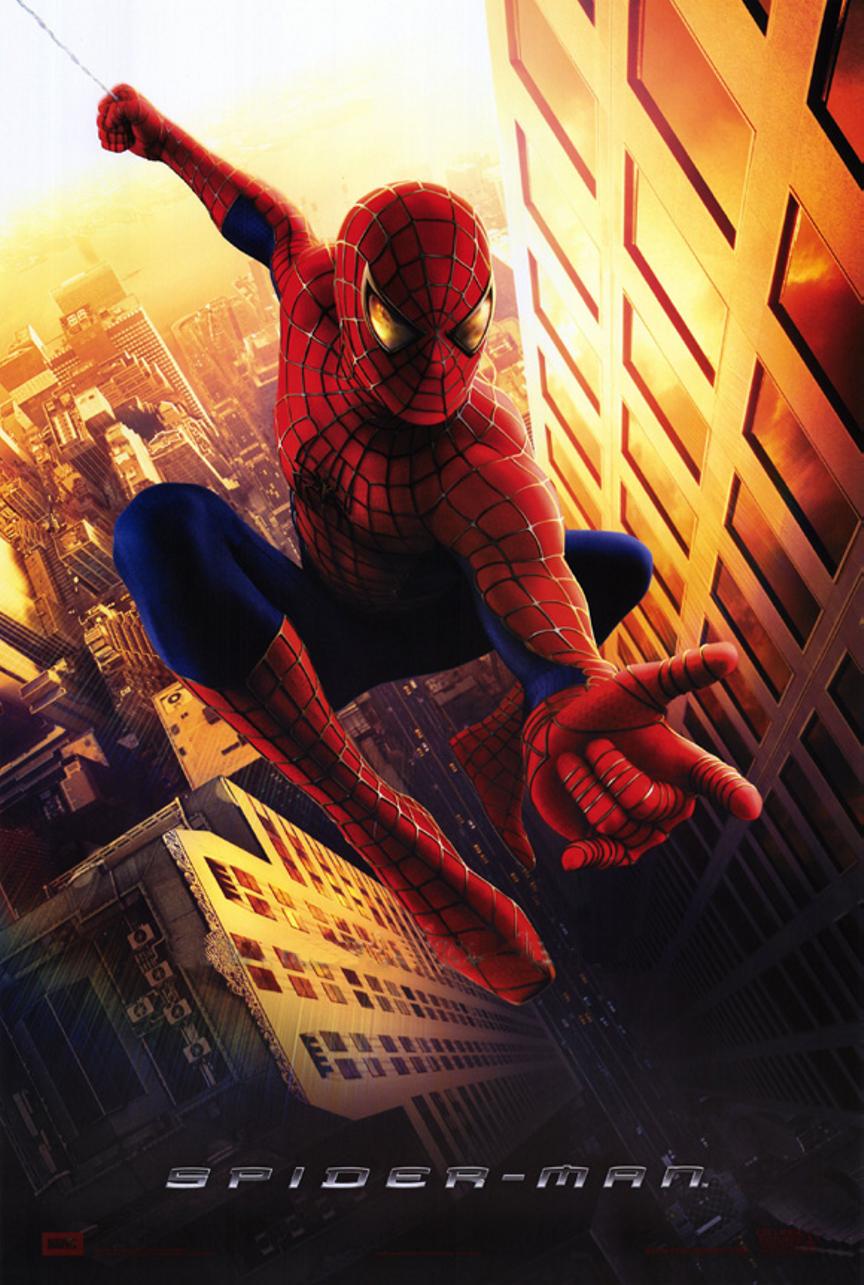 The story describes the transformation of high-school senior Peter Parker (Maguire) into a spiderlike superhero and the beginning of his career as a crime fighter. Peter lives in Forest Hills, a quiet neighborhood in the New York City borough of Queens, with his Uncle Ben (Robertson) and Aunt May (Harris). He secretly loves Mary Jane Watson (Dunst), the pretty, warm-hearted girl next door, but he is too shy to approach her. His friend Harry Osborn (Franco) is the son of Dr. Norman Osborn (Dafoe), president of the Oscorp manufacturing corporation, which is working to win a contract to supply weapons to the United States Army.

On a field trip to a genetics laboratory, Peter is bitten by a genetically engineered spider. He passes out in his bedroom at home, and the next day his vision is perfect, he has become more muscular, his wrists emit web strings, and his reflexes are super-quick. At school, he saves Mary Jane from a split-second fall and easily defeats her bullying boyfriend in a fistfight. Realizing that the spider's bite has given him spiderlike powers, he trains himself to scale walls, jump between rooftops, and swing through the city.

Peter enters a wrestling tournament, hoping to win $3,000 so he can buy a sports car to impress Mary Jane. On the day of the tournament, Ben tries to give him some fatherly advice, but Peter lashes out at him. At the tournament, the announcer presents Peter as "The Amazing Spider-Man". Peter defeats his opponent, but the man in charge only gives him $100. When a thief robs the man, Peter takes his revenge by allowing the robber to escape, but he discovers later that the thief killed Uncle Ben during his getaway. Feeling responsible for Ben's death, and feeling guilty for rejecting his advice, Peter dedicates himself to fighting crime as Spider-Man. He makes money by selling pictures of himself to Daily Bugle newspaper editor J. Jonah Jameson (Simmons).

Meanwhile, under pressure from the military, Norman tests Oscorp's dangerous new performance-enhancing chemical on himself. The chemical makes him stronger, but he also develops a maniacal alter ego. He immediately murders his assistant, then kills several of his competitor's scientists from the air, wearing an artificial exoskeleton and standing on a small flying platform called a "glider". After Oscorp's directors fire him, he flies to an Oscorp-sponsored fair and kills them before Spider-Man drives him away. Jameson dubs Norman's alter ego the "Green Goblin". After Spider-Man refuses the Goblin's offer to work together and Norman secretly discovers that Peter is Spider-Man, the Green Goblin attacks Aunt May.

As they watch over May in the hospital, Mary Jane tells Peter she loves Spider-Man, and Peter expresses his own feelings for her. Harry sees them holding hands, and after he tells his father about their love for each other, revealing that Spider-Man has feelings for Mary Jane, the Goblin lures Spider-Man to the top of the Queensboro Bridge by taking Mary Jane and a Roosevelt Island Tramway car full of children hostage. He drops both at the same time, but Spider-Man saves them all, and when he takes him to an abandoned building for a fight, he accidentally impales himself with his glider. Spider-Man unmasks the Goblin, and Norman dies after asking Peter not to tell Harry that he (Norman) was the Goblin.

At Norman’s funeral, having seen Spider-Man bring Norman's body to the mansion, Harry vows to Peter that he will kill Spider-Man to avenge Norman's death. Mary Jane confesses her love to Peter and kisses him, but Peter insists that they can only be friends, afraid that she would suffer further harm if Spider-Man's enemies knew that he loves her. Walking away from Mary Jane, who is now in tears, he recalls Ben's words of advice, "With great power comes great responsibility," and accepts his new life as Spider-Man.