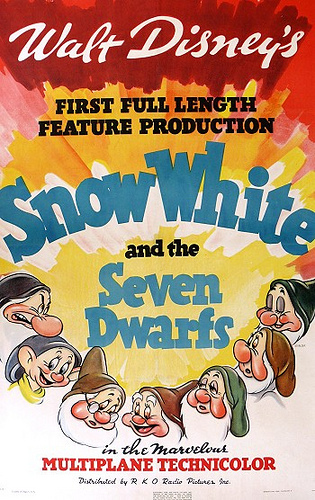 Through a textual prologue the audience is told that Snow White is a princess living with her stepmother, a vain and wicked witch known only as the Queen. Fearing Snow White's beauty, the Queen forced her to work as a scullery maid and would daily ask her Magic Mirror "who is the fairest one of all". The mirror would always answer that the Queen was, pleasing her.

At the film's opening, the Magic Mirror informs the Queen that Snow White is now the fairest in the land. The jealous Queen orders her huntsman to take Snow White into the woods and kill her, demanding that he bring her the dead girl's heart in a jeweled box as proof of the deed. The huntsman, unwilling to harm Snow White, instead spares her life, and urges her to flee into the woods and never come back, bringing back a pig's heart instead.

Lost and frightened, the princess is befriended by woodland creatures who lead her to a cottage deep in the woods. Finding seven small chairs in the cottage's dining room, Snow White assumes the cottage is the untidy home of seven children. It soon becomes apparent that the cottage belongs instead to seven adult dwarfs, Doc, Grumpy, Happy, Sleepy, Bashful, Sneezy, and Dopey, who work in a nearby mine. Returning home, they are alarmed to find their cottage clean and surmise that an intruder has invaded their home. The dwarfs find Snow White upstairs, asleep across three of their beds. The princess awakens, introduces herself, and all of the dwarfs except Grumpy (who is suspicious, but eventually warms up to her) welcome her as a house guest after they learn she can cook. Snow White begins a new life cooking and keeping house for the dwarfs.

The Queen eventually discovers that Snow White is still alive when the mirror again answers that Snow White is the fairest in the land. Using magic to disguise herself as an old hag, the Queen goes to the cottage while the dwarfs are away and tricks Snow White into biting into a poisoned (magic wishing) apple that sends her into a deep sleep, which can only be broken by love's first kiss. The vengeful dwarfs, alerted by the woodland animals who recognized the Queen, chase the Queen up a cliff and trap her. She tries to roll a boulder over them but lightning strikes the cliff she is standing on and she falls to her death.

The dwarfs return to their cottage and find Snow White seemingly dead. Unwilling to bury her body out of sight in the ground, they instead place her in a glass coffin trimmed with gold, and eternal veil, in a clearing in the forest. Together with the woodland creatures, they keep watch over her body through the seasons.

After several seasons pass, a Prince who had previously met and fallen in love with Snow White, learns of her plight and visits her coffin. Captivated by her beauty, he kisses her, which breaks the spell and awakens her. The dwarfs and animals all rejoice as Snow White and the prince ride off to the Prince's castle.