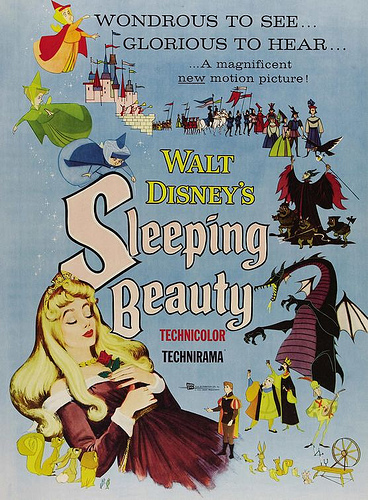 After many childless years, King Stefan and Queen Leah welcomed the arrival of their daughter, Aurora. The newborn Princess Aurora is named after the Roman goddess of the dawn because she fills the lives of her mother and father, King Stefan and Queen Leah, withsunshine. While still an infant, she is betrothed to the also-young Prince Phillip, son of King Hubert, so that the kingdoms of Stefan and Hubert will be forever united. At her christening, the Three Good Fairies Flora, Fauna, and Merryweather arrive to bless her. Flora gives her the gift of beauty while Fauna gives her the gift of song. Before Merryweather can give her blessing, the wicked fairy Maleficent appears, expressing disappointment in not being invited to Aurora's christening ceremony and curses the princess to die when she touches a spinning wheel's spindle before the sun sets on her sixteenth birthday. Maleficent leaves, and Merryweather is able to use her blessing to weaken the curse so that instead of death, Aurora will fall into a deep sleep until she is awakened by true love's kiss. Though King Stefan decrees all spinning wheels in the kingdom burned, the Three Good Fairies know Maleficent's curse cannot be stopped that easily and devise a plan to protect her. With the king and queen's consent, they disguise themselves as peasant women and sneak Aurora away with them to a woodland cottage until her sixteen birthday lapses, passing themselves off as her aunts and swearing off magic to conceal themselves.

Years later, Aurora, renamed Briar-Rose, had grown into a gorgeous young woman with the blessings that Flora and Fauna bestowed to her. Sweet and gentle, she dreams of falling in love one day. By that time, Maleficent is vexed at her minions' incompetence in locating the princess and sends her raven familiar, Diablo, to look for Aurora. On the day of her sixteenth birthday, the fairies attempt to make Aurora aball gown and a birthday cake. When their attempts end in disaster they decide to use their wands, resulting in a magical fight between Flora and Merryweather over the color of the gown—Flora insisting that it be pink and Merryweather insisting that it be blue—that catches Diablo's attention. Meanwhile, Aurora gathers berries while singing to her animal friends, attracting the attention of Prince Phillip, now a handsome young man, as he is out riding his horse in the woods. When they meet, they instantly fall in love, Phillip believing her to be a peasant girl. Realizing that she has to return home, Aurora flees from Phillip without ever learning his name. Despite promising to meet him again, the fairies, not knowing that the man Aurora met is the prince, reveal the truth of her birth to her and take her to her parents and her betrothed's family insisting that she never see him again, much to her dismay. Meanwhile,king Stefan and king hubert end up in a short fight when Stefan accidentally says " it may come as quite a shock." but they come to their senses after they realize that the fight is silly. Phillip returns home telling his father of a peasant girl he met and wishes to marry in spite of his prearranged marriage to Princess Aurora, telling his father that betrothal is "the 14th century." king hubert tries to convince phillip to marry aurora, but fails when he accidently misunderstands phillip's agreeing to marry "the girl i love". king hubert then wonders "how will i ever tell king stefan?"

In the castle, Maleficent uses her magic to lure Aurora away from her boudoir and up to a tower, where a spinning wheel awaits her. Fascinated by the wheel with Maleficent's will enforcing it, Aurora touches the spindle, pricking her finger and completing the curse. The good fairies place Aurora on a bed and place all in the kingdom in a deep ageless sleep until the spell is broken. While falling asleep, King Hubert tries to tell Stefan of his son being in love with a peasant girl, which makes Flora realize that Prince Phillip is the man Aurora has fallen in love with, and they fly back to the cottage for him since his love for Aurora will break the spell. At that time, Prince Phillip arrives at the cottage, but is kidnapped by Maleficent's minions and taken to the dungeons of her lair, "The Forbidden Mountain", to prevent him from kissing Aurora. However, the fairies sneak into Maleficent's stronghold and free the prince. Armed with the magical Sword of Truth and TheShield of Virtue, Phillip and the fairies escape from the Forbidden Mountain whilst being attacked by Maleficent's minions, which the fairies succeed in blocking. When Diablo tries to warn Maleficent, Merryweather chases him and eventually kills him by turning him into a stone statue, alerting Maleficent. The prince braves all obstacles Maleficent throws at him to reach the castle, including a large bush of thorns, before battling Maleficent herself when she transforms into a gigantic fire-breathing dragon. After a long fight in which his shield is destroyed, Phillip throws the sword, blessed by the fairies' magic, directly into Maleficent's heart, causing Maleficent to fall to her death from a cliff, leaving nothing but her robe and the sword now faded black.

Phillip climbs to Aurora's chamber, and removes the curse with a kiss to stop the attack. As the film ends, Phillip and Aurora both happily learn that their betrothed and their beloved are one and the same. They arrive at the ballroom, where Aurora is happily reunited with her parents, and she and Prince Phillip dance a waltz.