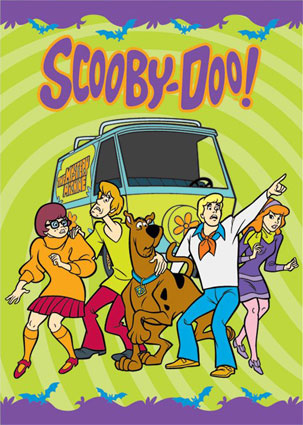 Scooby-Doo is an American animated cartoon franchise, comprising several animated television series produced from 1969 to the present day. The original series Scooby-Doo, Where are You! was created by Hanna-Barbera productions in 1969. It was a Saturday morning cartoon series that features the misadventures of four teenagers: Fred Jones, Daphne Blake, Velma Dinkley, and Norville "Shaggy" Rogers and their talking Great Dane, Scooby-Doo as they travel around solving mysteries involving "supernatural" creatures.   The basic premise of every episode of Scooby-Doo is that the Scooby gang finds themselves in some location in their van, the Mystery Machine. They will encounter a ghost, monster or some other supernatural entity that is haunting the area and terrorizing the locals. This naturally leads the gang to investigate. The kids will split up and search for clues and unravel the mystery, all the while being chased by the monster. Eventually, the kids will realize that the supernatural haunting is actually an elaborate hoax and manage to capture the villain and unmask him. Revealed as just a regular crook, the villain is arrested and taken away often saying "...and I would have gotten away with it, too, if it weren't for you meddling kids!"   Following the success of the original series, Hanna-Barbera and its successor Warner Bros. Animation have produced numerous follow-ups and spin-off series, including television specials and theatrical films. Repeats of the various Scooby-Doo series are frequently broadcast and the series and characters remain popular to this day.
Read More about Scooby-Doo (1969 to Present)