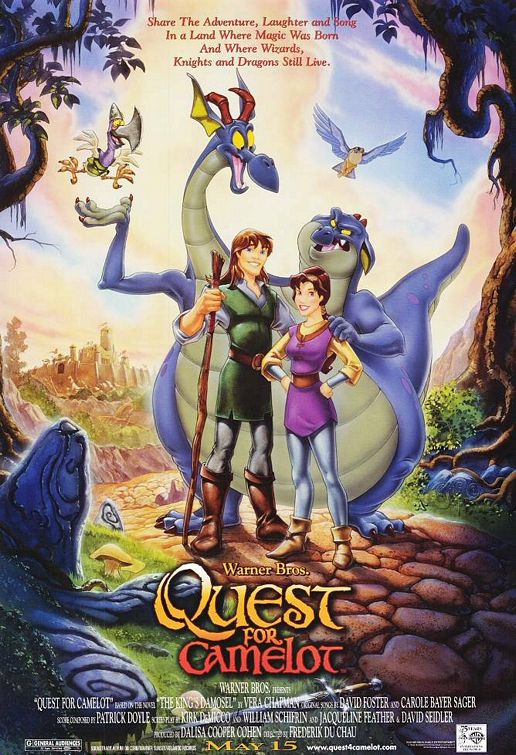 A young girl named Kayley desires to become a knight of the Round Table like her father Lionel in the kingdom of Camelot and wishes to accompany him when the knights are called to a special meeting with King Arthur, but he kindly objects that she is too young and promises to take her someday. When the knights arrive at Camelot (United We Stand) one of the knights, Ruber, who has gone mad with power and seeks riches from his position as a knight of the Round Table, attacks Arthur. Mortally wounding Lionel with his club, he is ultimately driven off by the other knights after Arthur strikes him down with Excalibur.

After Lionel dies, Kayley must learn to live without him. Inspired by her father's bravery (On My Father's Wings), she spends ten years tending to her family farm. Now a young woman, Kayley is still much of a dreamer and still wishes to be a knight, much against her mother Julianna's wishes.

Her dream seems to pay off though, when the knights again gather with King Arthur and Merlin to discuss the era of peace among the kingdom when a gryphon flies in, attacks and wounds Arthur and takes the sword Excalibur. Merlin summons a bird with silver wings called Aiden to face the gryphon. After a furious fight, the gryphon drops the sword into the Dark Forest and loses it. He reports this to Ruber. The call goes out across the land that Excalibur had been stolen, but Kayley's mother forbids her to go out after it. Shortly thereafter, Ruber comes to pay Julianna a visit, planning to use her to gain access to Camelot and introducing a potion that he had gotten that combines his men and a chicken with an assorted array of weapons (Ruber). During the festivities, Kayley manages to free herself and escapes capture by fleeing to the Forbidden Forest (The Prayer), whose enchanted plant and animal life prevent Ruber's army from following her. The chicken, named Bladebeak is then ordered to follow her and report her whereabouts to him.

While lost in the forest, Kayley comes across Garrett, a handsome yet blind hermit who wants to be left alone (I Stand Alone). He grudgingly helps Kayley find Excalibur. Guided by Aiden, they manage to find the cover of the sword in the footprints of a giant. As they make their way into dragon infested mountains, they come across a conjoined two-headed dragon - the sophisticated and intelligent Devon and the boorish, but loyal Cornwall or "Corny" for short. Thanks to the bullying from the rest of the dragons due to their differences, and their inability to fly, they want nothing more than to be apart from one another (If I Didn't have You). Developing a friendship toward Kayley, they join the party. Due to Kayley's insistence, Garrett misses a key warning from Aiden and is injured in an attack. During the escape, Kayley uses the forest's plants to heal Garrett's wounds, and they develop a mutual attraction and feeling toward one another (Looking Through Your Eyes).

Soon they come across the giant who is using the sword as a toothpick and manage to outwit Ruber again, trapping him and his minions with the giant as they slide uncontrollably down the mountainside. Garrett returns to the forest, having grown distant from the world of men and preferring to stay in the forest. Kayley starts toward Camelot, sword in hand, but is captured by Ruber's men. Devon and Cornwall discover their power of flight, which only works when they cooperate or agree on something mutually. They rejoin Garrett, who mounts a rescue mission, but Ruber manages to gain entry to Camelot via disguise and traps himself with King Arthur with Excalibur; now grafted to his arm with his magic potion. Kayley has been bound and gagged in the back of the cart, but is freed by Bladebeak. Kayley and Garrett manage to fight their way with their friends' help to join with Arthur and in a fight, they manage to trick Ruber into inserting the sword back into the stone it had been pulled from. The magical forces conflict and completely disintegrate Ruber, leaving the kingdom free again. The magic that spills on the kingdom separates all of Ruber's men (and Bladebeak) from their weapons and separates Devon and Cornwall, but the pair decide to reunite before the magic dissipates.

Soon after Kayley and Garrett are knighted as members of the round table. As the pair ride off into the sunset, their horse has a flag mounted to its back reading "Just Knighted".

Read More about Quest For Camelot (1998)