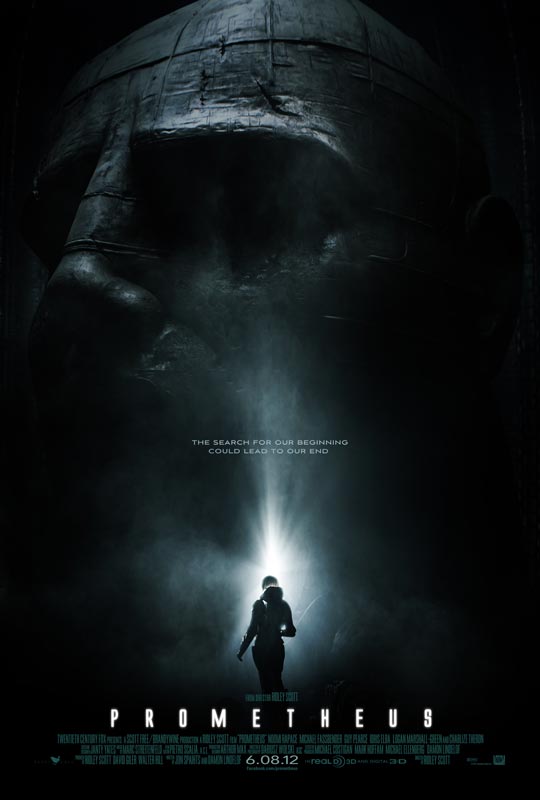 Prometheus is a 2012 science fiction film directed by Ridley Scott.

The story is set in the late 21st century and centers on the crew of the spaceshipPrometheus as they follow a star map discovered among the artifacts of several ancient Earth cultures. Seeking the origins of humanity, the crew arrive on a distant world and discover a threat that could cause the extinction of the human race.

In 2089, archaeologists Elizabeth Shaw and Charlie Holloway discover a star map in Scotland that matches others from several unconnected ancient cultures. They interpret this as an invitation from humanity's forerunners, the "Engineers". Peter Weyland, the elderly CEO of Weyland Corporation, funds an expedition to follow the map to the distant moon LV-223 aboard the scientific vessel Prometheus. The ship's crew travels in stasis while the android David monitors their voyage. Arriving in 2093, they are informed of their mission to find the Engineers.

The Prometheus lands near a large artificial structure, which a team explores. Inside they find numerous stone cylinders, a large, monolithic statue of a humanoid head, and the decapitated corpse of a large alien, thought to be an Engineer. The expedition is cut short when a rapidly-approaching storm forces the crew to return to the ship. David secretly takes a cylinder from the structure, while the remaining ones begin leaking a dark liquid. Back in the ship's lab, the Engineer's DNA is found to match that of humans. David investigates the cylinder and the dark liquid inside.

The Prometheus's captain, Janek, speculates that the structure was an Engineer military installation that lost control of a virulent biological weapon, the dark liquid. He also determines that the structure houses a spacecraft. David separately discovers a control room containing a surviving Engineer in stasis, and a star map highlighting Earth. After awakening the Engineer, it goes on a rampage and attempts to escape on the Engineer spacecraft in order to infect Earth and humanity with the dark liquid. After an intense battle that sees the Engineer's destruction, Shaw leaves on another Engineer spacecraft for the Engineer homeworld in order to find out why they want to destroy humanity.