Princess & the Frog, The Original and Limited Edition Art (2009) 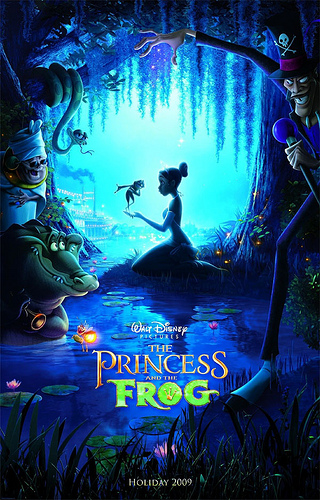 Princess & the Frog follows waitress and aspiring restaurant owner Tiana as she tries to fulfill her late father's dream in 1926 New Orleans. Despite her mother's worries, Tiana remains single minded in opening "Tiana's Place," working two jobs to save enough money to secure the ideal building for her restaurant. Meanwhile, Prince Naveen of Maldonia has arrived in New Orleans determined to better his financial situation. After being cut off by his parents, Naveen is forced to marry a rich southern belle to maintain his lifestyle. It soon becomes obvious that Tiana's best friend and the rich sugar baron's daughter, Charlotte LaBouff, is the perfect candidate. Lurking in the shadows is the voodoo witchdoctor Dr. Facilier. Angry at the neglect he receives from the rich and powerful, Facilier cons the money-hungry Naveen and his emotionally abused butler, Lawrence, into thinking he can make their dreams come true. However, Facilier turns Naveen into a frog, with Lawrence, through the use of a voodoo talisman, adopting the prince's likeness. Lawrence, as Naveen, sets out to marry Charlotte with plans to split the money with Facilier, who has some shady plans of his own. That night, at Charlote's Masquerade ball, Naveen convinces Tiana to kiss him in an effort to lift the curse. She does kiss Naveen, but instead is changed into a frog herself. The pair escape into the bayou, where they meet Louis, a neurotic trumpet-playing alligator, and Ray, a Cajun firefly who is in love with a star he calls Evangeline. They take them to Mama Odie, the voodoo queen of the bayou, in hopes that she can lift the curse. On the way, they face frog hunters and "pricker bushes," and Tiana and Naveen grow closer together. Also, Tiana discovers that there is more to life than just hard work, while Naveen learns to value more than money and leisure. Dr. Facilier makes a deal with his "friends on the other side," promising them all of New Orleans's souls in exchange for re-capturing Naveen. The demons capture Naveen, but he is saved by Mama Odie. She tells the frogs that in order for them to become human, Naveen must kiss a princess. Since Charlotte is the princess of the Mardi Gras Parade, the frogs must reach her by midnight, when Mardi Gras ends and she is no longer a princess. Before returning to the city, Naveen tries to propose to Tiana but fumbles, and is again captured by the demons and brought to Lawrence and Facilier. Tiana realizes that Naveen was proposing, but before she can tell him, she sees Lawrence in his Naveen form with Charlotte, and she flees from the parade, heartbroken. Ray learns of the deceit and steals the charm, but is mortally wounded by Facilier while battling the demons. Facilier tries to tempt Tiana into giving him the charm, but she resists and destroys it. With his debt unpayable, the demons take Facilier's soul instead. Meanwhile, Naveen informs Charlotte that he actually loves Tiana, and after Tiana also proclaims her love for him, Charlotte agrees to kiss Naveen. However, Mardi Gras ends before Charlotte can break the spell. Naveen and Tiana learn of Ray's injuries, but are able to reveal their love for each other to him before he dies. The bayou creatures honor Ray with a funeral, but rejoice when a new star appears next to the Evening Star. Later, Tiana and Naveen marry with help from Mama Odie. The pair kiss, and magically resume human form; as Tiana is now a princess herself, her kiss breaks the spell. Finally, the happy couple purchases Tiana's desired building and opens their restaurant. As the film ends, Tiana and Naveen host a gala opening for "Tiana's Palace" and dance underneath the Evening Stars.
Read More about Princess & the Frog, The (2009)