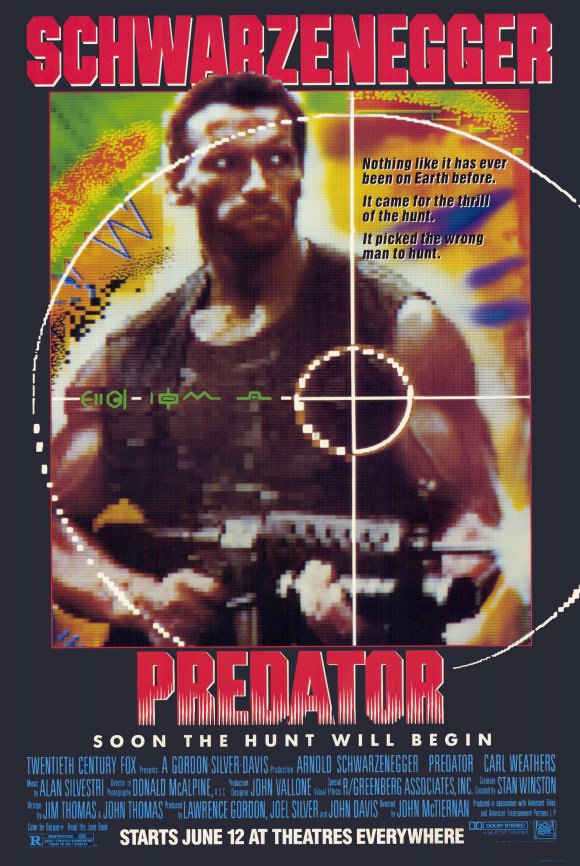 The film opens with a mysterious spacecraft entering Earth's atmosphere, then focuses on the coast of Guatemala, where a joint task force, led by Major Alan "Dutch" Schaefer (Arnold Schwarzenegger), is assigned to rescue a presidential cabinet minister kidnapped by guerrilla forces in Val Verde, Guatemala. Dutch's old military buddy, George Dillon (Carl Weathers), who is currently a Central Intelligence Agency (CIA) officer, steps in as a liaison. The team is then inserted by helicopter to their destination within the jungle.

As they progress, the team finds the wreckage of a downed helicopter and later the remains of several skinned bodies. They are identified to be an Army Special Forces team, whose presence in the country mystifies Dutch. They soon make their way to a heavily defended rebel encampment and take out its inhabitants in short order, except for a woman named Anna (Elpidia Carrillo) whom they take prisoner. Dutch is enraged to discover the rescue mission had been a setup to get his group to destroy the camp, after Dillon confesses that the men they found earlier disappeared in a failed rescue mission of two CIA agents.

As the team make their way to the extraction point, they are observed from afar by an unknown creature using thermal imaging. After two members of the team are mysteriously slain, the survivors become aware that something in the jungle is stalking them. Anna delivers insight into the creature, which has apparently become a local legend for hunting humans as trophies. Despite attempts to track down and trap the creature, the team is slowly killed off one by one, until only Dutch and Anna remain. Realizing the creature only kills those possessing weapons, a wounded Dutch sends Anna unarmed to the extraction point. Dutch narrowly escapes the creature - revealed to be a masked, bipedal alien - by inadvertently masking his body's heat signature with mud.

Dutch applies more mud camouflage and improvises various weaponry and traps. Hearing Dutch's war-cry, the creature soon arrives and captures him. The creature challenges Dutch to a final duel in hand-to-hand combat, revealing its monstrous face and discarding its electronic weaponry before brutally beating him. Once cornered, Dutch manages to drop the counterweight from one of his traps, which falls and crushes the creature. As Dutch asks the mortally wounded alien what it is, the creature mimics his question in garbled English and then activates a time bomb on its wrist device while laughing. Dutch runs for cover as a massive explosion destroys the creature and the nearby jungle. Anna and the rescue helicopter finally arrive to pick up Dutch and head back to base.