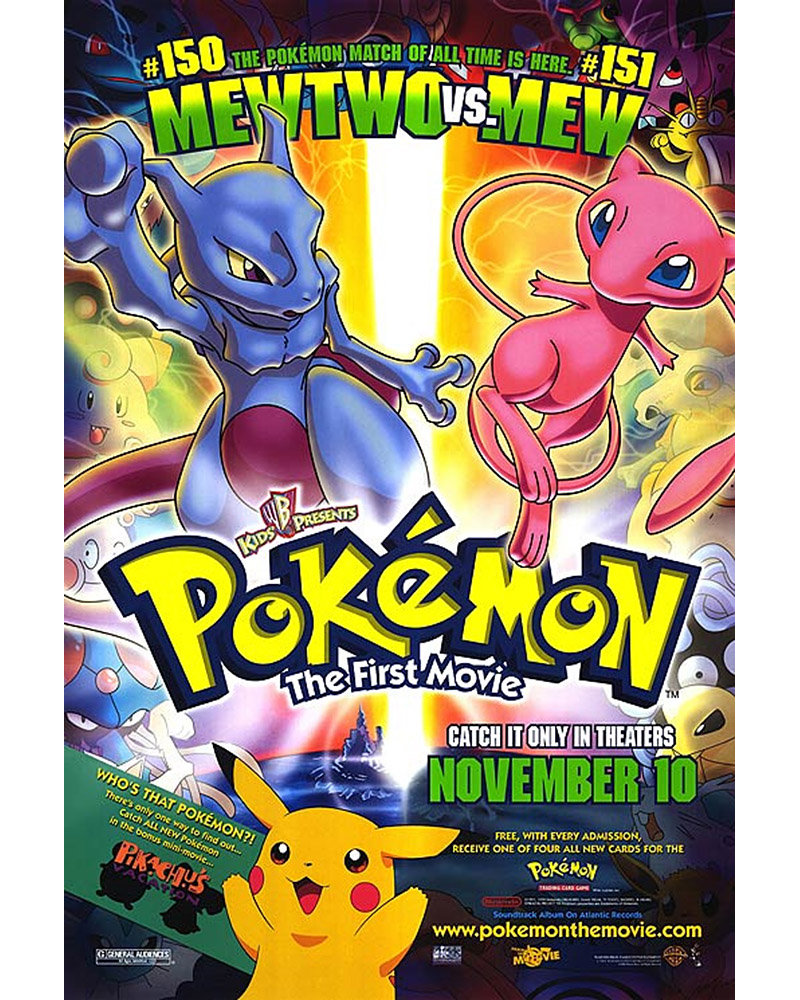 Pokémon: The First Movie: Mewtwo Strikes Back, commonly referred to as Pokémon: The First Movie, originally released as Pocket Monsters the Movie: Mewtwo Strikes Back! (劇場版ポケットモンスター ミュウツーの逆襲 Gekijōban Poketto Monsutā: Myūtsū no Gyakushū?), is a 1998 Japanese anime film[2] directed by Kunihiko Yuyama, the chief director of the Pokémontelevision series. It is the first theatrical release in the Pokémon franchise. It was released in Japan on July 18, 1998. The English-language adaptation, produced by Nintendoand 4Kids Entertainment and distributed by Warner Bros. Pictures (under the Kids' WB! label), was released in North America on November 10, 1999. The film primarily consists of three segments: Pikachu's Vacation, a 21-minute feature focusing on the series mascot Pikachu; Origin of Mewtwo, a 10-minute featurette that functions as a prologue to the main feature; and Mewtwo Strikes Back, the main 75 minute film feature. The featurette was added on for later releases and eventually dubbed as a special feature in the U.S. release of the TV special (that was released as a direct-to-video follow-up film sequel in the U.S.A.) Pokémon: Mewtwo Returns as The Uncut Story of Mewtwo's Origin. Although Pokémon was extremely popular when the film was released, the English-language version received negative reviews from film critics. Despite the reviews, it was a box office success worldwide, topping the box office charts in its opening weekend, and eventually grossing US$163.6 million worldwide. Since the debut of the anime adaptation of Satoshi Tajiri's Pokémon Games, Toho has produced the theatrical films based on the franchise since 1998 in Japan: five based on the original series Pokémon anime, four based on the Advanced Generation series, four based on the Diamond and Pearlseries, with the tenth film commemorating the tenth anniversary of the anime, three based on the Best Wishes series, and three based on the XYseries, beginning with Pokémon the Movie: Diancie and the Cocoon of Destruction. There are also two television specials that were broadcast on TV Tokyo and ten short films. Theatrical films, with little exception, center on and feature Pokémon (typically legendary ones) that have yet to officially debut in the games, often with the Pokémon causing some sort of disaster with its powers or being pursued by someone with less-than-noble tendencies. Ash and his friends will often befriend a Pokémon during the movie and must, at the end, say goodbye to their new friend. The locations in which the movies take place have been, since Pokémon Heroes, based on a real-world location outside Japan. Topics explored are typically deeper than those explored in the episodes aired on TV, with the battle between greedy people who would use Pokémon for evil and those like Ash who are friends and partners to their Pokémon being a central issue in several movies. As with the franchise's TV anime series, the theatrical films and the first two TV specials were all licensed in North America by Warner Bros. with first three films, Miramax Films with four films and Viz Media since Pokémon: Lucario and the Mystery of Mew.
Read More about Pokémon: The Movies (1998-2002)