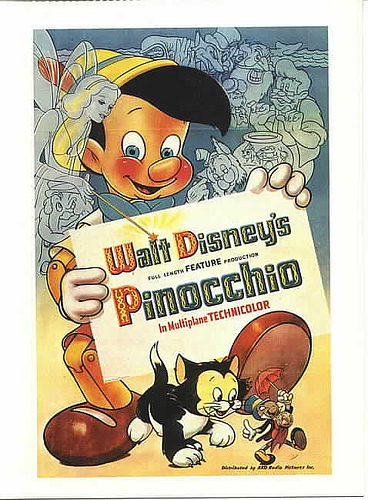 Jiminy Cricket walks into the workshop of the woodworker Mister Geppetto to warm himself from the cold, and watches as Geppetto finishes work on a puppet he names Pinocchio. Before falling asleep, Geppetto makes a wish on a falling star that Pinocchio could be a real boy. During the night, the Blue Fairy visits the workshop to grant Geppetto's wish and brings Pinocchio to life, though he is still a puppet. The fairy tells Pinocchio that if he wants to become a real boy of flesh and blood he must prove himself to be brave, truthful and unselfish and able to tell right from wrong by listening to his conscience. Pinocchio doesn't understand what a conscience is, and Jiminy appears to explain it to him. The Blue Fairy asks if Jiminy would serve as Pinocchio's conscience, a task he accepts.

Geppetto discovers that his wish has come true, and is filled with joy. The next day, he sends Pinocchio on his first day of school. However, Pinocchio is led astray by the conniving Honest John and Gideon, who convince him to join Stromboli's puppet show instead. Pinocchio becomes Stromboli's star attraction, but when Pinocchio offers to come back in the morning, Stromboli locks Pinocchio in a birdcage to stop him leaving. With the help of the Blue Fairy and Jiminy, Pinocchio escapes.

Unfortunately, on his way back to Geppetto's house, Pinocchio is once again led astray by Honest John and Gideon, who convince him to go to Pleasure Island. On his way he befriends Lampwick, a misbehaved and destructive boy. Soon Pinocchio and the other boys begin to enjoy gambling, smoking, getting drunk and destroying Pleasure Island, much to Jiminy's dismay. Then Jiminy discovers the island has a curse that transforms boys who "make jackasses of themselves" into real donkeys, who are then sold to work in the salt mines and circuses as part of an evil racket run by The Coachman. Lampwick is soon transformed into a donkey, but Pinocchio manages to escape with a donkey's ears and tail.

Upon returning home, they find the workshop empty and soon learn from a letter by the Blue Fairy that Geppetto, while venturing out to sea to rescue Pinocchio from Pleasure Island, had been swallowed by a giant whale named Monstro. Determined to rescue his father, Pinocchio jumps into the bottom of the ocean, with Jiminy accompanying him. However, Pinocchio is soon found and eaten by Monstro, where he is reunited with Geppetto and his pets inside the whale. Pinocchio devises an escape plan by burning wood in order to make Monstro sneeze. The plan works, but the enraged whale gives chase. Eventually, Pinocchio succeeds in getting Geppetto to safety in a cave under a cliff before Monstro rams into it, but Pinocchio dies in the process. As Geppetto, Jiminy and the pets mourn the loss, the Blue Fairy decides that Pinocchio has proven himself unselfish and thus fulfills her promise to turn him into a real boy, bringing him back to life, much to the delight of Geppetto and Jiminy.