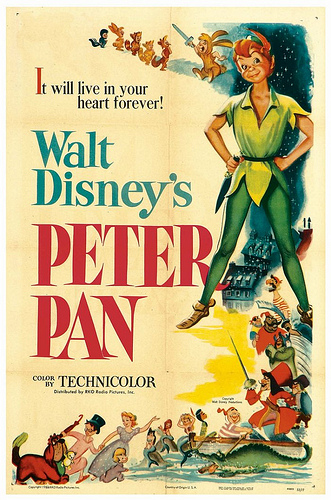 As the narrator tells us, the action about to take place "has happened before, and will all happen again", only now it will happen in Edwardian London in the neighborhood of Bloomsbury, where George and Mary Darling's preparations to attend a party are disrupted by the antics of the boys John and Michael, acting out a story about Peter Pan and the pirates, told to them by their older sister Wendy. The father angrily declares that Wendy has gotten too old to continue staying in the nursery with them, and it's time for her to grow up. That night they are visited in the nursery by Peter Pan himself, who teaches them to fly with the help of his pixie friend, Tinker Bell, and takes them with him to the island of Never Land.

A ship of pirates is anchored off Never Land, commanded by Captain Hook with his sidekick Mr. Smee. Hook boldly plots to take revenge upon Peter Pan for cutting off his hand, but he trembles when the crocodile that ate it arrives; it now stalks him hoping to taste more. The crew's restlessness is interrupted by the arrival of Peter and the Darlings. The children easily evade them, and despite a trick by jealous Tinker Bell to have Wendy killed, they meet up with the Lost Boys, six lads in animal-costume pajamas who look to Peter as their leader. John and Michael set off with the Lost Boys to find the island's Indians, who instead capture them, believing them responsible for taking the chief's daughter Tiger Lily.

Meanwhile, Peter takes Wendy to see the mermaids, where they see that Hook and Smee have captured Tiger Lily, to coerce her into revealing Peter's hideout. Peter and Wendy free her, and Peter is honored by the tribe. Hook then plots to take advantage of Tinker Bell's jealousy of Wendy, tricking her into revealing the location of Peter's lair. Wendy and her brothers eventually grow homesick and plan to return home. They invite Peter and the Lost Boys to return to London and be adopted by the Darling parents. The Lost Boys agree, but Peter is so set against growing up that he refuses, presumptuously assuming that all of them will return shortly. The pirates lie in wait and capture the Lost Boys and the Darlings as they exit, leaving behind a time bomb to kill Peter. Tinker Bell learns of the plot just in time to snatch the bomb from Peter as it explodes. (This scene is completely different from Barrie's play; in the play, Captain Hook secretly poisons Peter's medicine, and Tinker Bell drinks it to save his life. Peter then pleads with the audience to clap their hands if they believe in fairies. They do, and Tinker Bell is made well again.)

Peter rescues Tinker Bell from the rubble and together they confront the pirates, releasing the children before they can be forced to walk the plank. Peter engages Hook in single combat as the children fight off the crew, and finally succeeds in humiliating the captain. Hook and his crew flee, with the crocodile in hot pursuit. Peter gallantly commandeers the deserted ship, and with the aid of Tinker Bell's pixie dust, flies it to London with the children aboard. However, the Lost Boys decide to return to never Land rather than be adopted in London.

Mr. and Mrs. Darling return home from the party to find Wendy not in her bed, but sleeping at the open window; John and Michael are asleep in their beds. The parents have no idea that the children have even been anywhere. Wendy wakes and excitedly tells about their adventures. The parents look out the window and see what appears to be a pirate ship in the clouds. Mr. Darling, who has softened his position about Wendy staying in the nursery, recognizes it from his own childhood, as it breaks up into clouds itself.