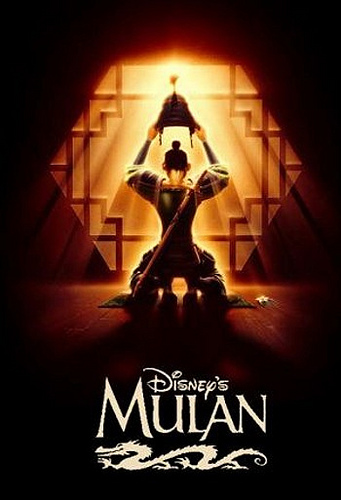 The Huns, led by the ruthless Shan Yu (Miguel Ferrer), invade Han China, forcing the Chinese emperor (Pat Morita) to command a general mobilization. Each family is given a conscription notice, requiring one man from each family to join the Chinese army. When Fa Mulan (Ming-Na) hears that her elderly father Fa Zhou (Soon-Tek Oh), the only man in their family, is forced to join the army, she decides to stand in his place, disguising herself as a young man named "Ping". Fa Zhou learns that Mulan has taken his place and prays to his family's ancestors, who order their "Great Stone Dragon" to protect her. The ancestors are unaware that Mushu (Eddie Murphy), a small dragon, takes the Dragon's place, and accompanies Mulan.

Mulan is initially misguided by Mushu in how to behave like a man, and starts a ruckus at the training camp. However, under command of Li Shang (B. D. Wong), she and her new friends at the camp, Yao (Harvey Fierstein), Ling (Gedde Watanabe), and Chien-Po (Jerry Tondo), become skilled warriors. Mushu, desiring to see Mulan succeed, creates a fake order from Li Shang's father, General Li (James Shigeta), ordering Li Shang to follow them into the mountains. They arrive at a burnt-out village and discover that General Li and his forces have been wiped out by the Huns. As they solemnly leave the mountains, they are ambushed by the Huns, but quick-thinking by Mulan buries most of the force in an avalanche. Mulan is hurt during the battle, and she is forced to reveal her deception. Li Shang abandons Mulan on the mountain while they make their way to the Imperial City to report the news of the Huns demise. However, Mulan catches sight of Shan Yu and a handful of his men making their way to the City intent on capturing the Emperor.

In the Imperial City, Mulan attempts to warn Li Shang about Shan Yu, but he refuses to listen. The Huns appear and capture the Emperor, locking themselves inside the palace. With Mulan's help, Li Shang, Yao, Ling, and Chien-Po pose as concubines and are able to enter the palace and defeat Shan Yu's men. Mulan lures Shan Yu into the path of a fireworks rocket, apparently killing him. Mulan is praised by the Emperor and the people of China, and while she accepts the Emperor's crest and Shan Yu's sword as gifts, she politely declines his offer to be his assistant and asks to return to her family. She returns home and presents these gifts to her father, but he is more overjoyed to have his daughter back safely. Li Shang, who has become enamored with Mulan, soon arrives under the guise of returning her helmet, but accepts the family's invitation for dinner. Mushu is granted a position as the Mulan family guardian by the ancestors amid a returning celebration.