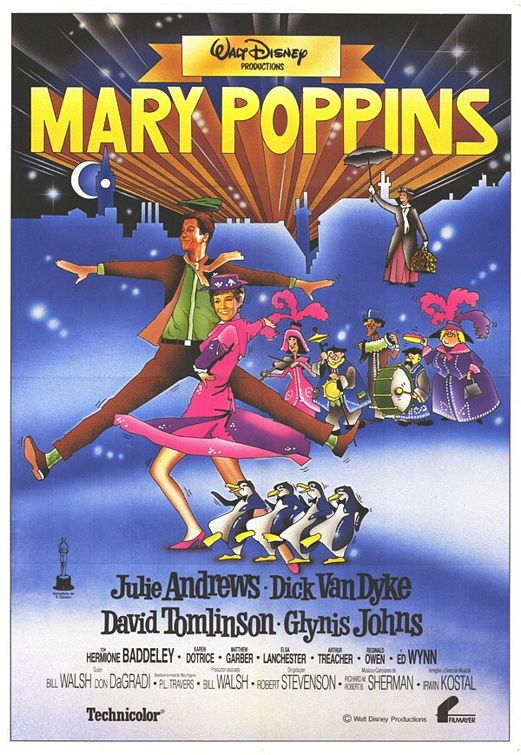 The film opens with Mary Poppins (Julie Andrews) perched in a cloud high above London in spring 1910. The action descends to Earth where Bert (Dick Van Dyke), a Cockney jack-of-all-trades is performing as a one-man band at a park entrance. The spectators watching him include: Ms. Persimmon (Marjorie Eaton), Miss Lark (Marjorie Bennett) and Mrs. Corry (Alma Lawton). He suddenly senses that his good friend is about to return. After the show, he speaks directly to the audience, introducing viewers first to Admiral Boom, who keeps his exterior rooftop "Ship Shape", by firing his cannon at 8:AM and 6:PM each day, and then to the well-to-do but troubled Banks family, headed by the cold and aloof George Banks (David Tomlinson) and the loving but highly distracted suffragette Winifred Banks (Glynis Johns).

The Bankses' latest nanny, Katie Nanna (Elsa Lanchester), is quitting, exasperated after the Banks children, Jane (Karen Dotrice) and Michael (Matthew Garber), have run off for the fourth time this week. Ellen, the maid (Hermione Baddeley), pleads with her not to leave, but Mrs. Brill, the cook (Reta Shaw), wishes her good riddance. Mrs. Banks returns home, and engages all four women in a rousing rendition of "Sister Suffragette", before Katie Nanna stalks out. Mr. Banks returns home from his job at the Dawes Tomes Mousley Grubbs Fidelity Fiduciary Bank, and Mrs. Banks reveals the children are missing. A policeman (Arthur Treacher), arrives with the children, who ask their father to help repair their damaged kite, but he dismisses them and advertises for an authoritarian nanny-replacement. Jane and Michael draft their own advertisement asking for a fun, kind-hearted and caring person, but Mr. Banks tears up the paper and throws it in the fireplace. Unnoticed, the remains of the note float up the dark chimney.

The next day, a queue of elderly and disagreeable looking candidates await at the door. However, a strong gust of wind blows the queue away and Mary Poppins floats down, held aloft by her magical umbrella, to apply. Mr. Banks is stunned to see that this calmly defiant new nanny has responded to the children's ad despite the fact he destroyed it. Although Mary Poppins recites the ad, she also tells George that she is firm and will also lay down ground rules with the children. As he puzzles, Mary Poppins employs herself and begins work, saying that she will stay for a trial period of one week, before deciding if she will take a permanent position. The children face surprises of their own: Mary possesses a bottomless carpetbag, and makes contents of the children's nursery come to life and tidy themselves (by snapping her fingers).

The trio then meet Bert, who is a close friend of Mary, in the park at work as a screever, where Mary uses one of his chalk pavement drawings as a gateway to an outing in an animated countryside. While in the drawing, the children ride a merry-go-round while Mary and Bert enjoy a stroll through the countryside, during which Bert dances at an outdoor bistro with four penguin waiters. Mary and Bert join the children on the merry-go-round, from which the horses break loose and take their riders on a trip through the countryside. As they pass by a fox hunt, Bert maneuvers to save an Irish-accented fox from the bloodhounds. Finally the quartet finds themselves in a horse race, which Mary wins. It is here that Mary first employs the nonsense word "Supercalifragilisticexpialidocious." The outing is interrupted by a rainstorm, which washes away the chalk drawing and returns the travellers to the park pavement.

That evening, the children ask Mary how long she'll stay with them. With a somber expression, she replies, "I shall stay until the wind changes". The next day, they all visit Bert's jovial Uncle Albert (Ed Wynn), who floats whenever he laughs, and join him in a tea party in mid-air, though Mary finds it childish and ridiculous. They all get down, only when one had to think of "Something Sad", when Mary firmly says: "It is time to go home."

Mr. Banks grows increasingly irate with his children's stories of their adventures, but Mary effortlessly inverts his attempted dismissal of her services into a plan to take his children with him to the Dawes Tomes Mousley Grubbs Fidelity Fiduciary Bank, where he is employed. On the way there, as they pass the bank, the children see "The Bird Woman (Jane Darwell)", of whom Mary sang to them the night before, and they want to feed the birds around her, but George will have none of it as he expresses his disinterest in what Mary Poppins says and orders his children to "come along" and not mention her name for the rest of the day. Upon arriving at the bank, Mr. Dawes Jr (Arthur Malet) and Mr. Dawes Sr (Dick Van Dyke)—Mr. Banks' employers—aggressively try to persuade Michael to invest his tuppence in the bank to the point of actually snatching it out of his hand without waiting for his permission. When Michael protests, the other customers misunderstand and start a run on the bank that forces the bank to suspend business. The Bank Guard (Jimmy Logan) chases the children causing the children to flee and wander into the slums of the East End of London. Fortunately, they run into Bert, now employed as a chimney sweep. He takes them safely home, explaining that their father does not hate them, but that he has problems of his own, and that unlike the children, has no one to whom to turn but himself.

At home, a departing Mrs. Banks employs Bert to clean the family's chimney and mind the children. Mary Poppins arrives back from her day off and warns of the dangers of this activity, but is too late as the children are both sucked up the chimney to the roof. Bert and Mary follow them and lead a tour of the rooftops of London that concludes with a joyful dance with Bert's chimney-sweep colleagues. A volley of fireworks from the Banks' eccentric neighbour, Admiral Boom (Reginald Owen), who mistakes them for Hottentots, orders Mr. Binnacle (Don Barclay) to set off the fireworks which sends the entire gathering back down a different chimney, which turns out to be the Banks' chimney. Mr. Banks arrives home, causing the chimney sweepers to depart outside the home, and out into the street, where they disappear from view within less than half a minute. Their departure conclude the festivities. Banks angrily inquires Mary Poppins what was the meaning of this, in which Mary replies that she never explains anything. Banks then receives a phone call from work ordering him to return immediately for disciplinary action. As Mr. Banks gathers his strength, Bert points out that while Mr. Banks does need to make a living, his offspring's childhood will come and go in a blink of an eye, and he needs to be there for them while he can. The Banks children approach their father to apologize, and Michael gives Mr. Banks his tuppence in the hope that it will make things all right. Banks gently accepts the offering.

A somber and thoughtful Mr. Banks walks alone through the night-time streets, for the first time noticing several of the buildings around him, including the cathedral and steps on which the bird woman was sitting earlier. At the bank, he is formally humiliated and sacked for causing the first run on the bank since 1773 (it is stated that the bank supplied the money for the shipment of tea destroyed in the Boston Tea Party, during which the colonists tossed the tea into Boston Harbor, rendering it unfit for drinking, even by Americans). However, after being at a loss when ordered to give a statement, Mr. Banks invokes Mary Poppins' all-purpose word "Supercalifragilisticexpialidocious!" to tweak Mr. Dawes. He gives Dawes the tuppence, tells the old man one of Bert's and Uncle Albert's jokes, and raucously departs. Dawes mulls over the joke, finally "gets it" and floats up into the air, laughing.

The next morning, the wind has changed direction, and so Mary must depart. Meanwhile, the Banks adults cannot find Mr. Banks, and fear that he might have become suicidal. However, Mr. Banks, now loving and joyful, reappears with the now-mended kite and cheerfully summons his children. The greatly relieved Mrs. Banks supplies a tail for the kite, using one of her suffragette ribbons. They all leave the house without a backward glance as Mary Poppins watches from a window. In the park with other kite-flyers, Mr. Banks meets Mr. Dawes Jr., now in charge of the bank, who says that his father literally died laughing. Instead of being upset, the son is delighted his father died happy and re-employs Mr. Banks to fill the opening as junior partner. Her work done, Mary Poppins takes to the air with a fond farewell from Bert (who was selling kites), telling her not to stay away too long.