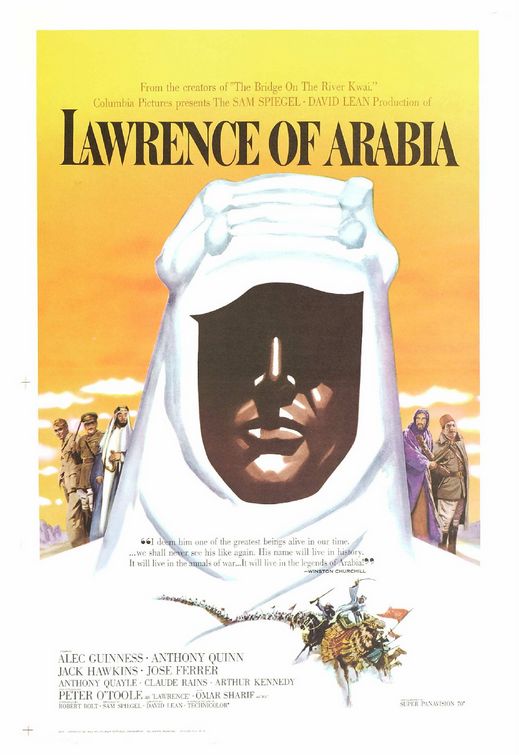 The film is presented in two acts, separated by an intermission.

In 1935, T. E. Lawrence (Peter O'Toole) is killed in a motorcycle accident. At his memorial service at St Paul's Cathedral, reporters try to gain insights into this remarkable, enigmatic man from those who knew him, with little success.

During the First World War, Lawrence is a misfit British Army lieutenant stationed in Cairo, notable only for his insolence and knowledge of the Bedouin. Over the objections of General Murray (Donald Wolfit), he is sent by Mr. Dryden (Claude Rains) of the Arab Bureau to assess the prospects of Prince Faisal (Alec Guinness) in his revolt against the Turks.

On the journey, his Bedouin guide is killed by Sherif Ali (Omar Sharif) for drinking from a well without permission. Lawrence later meets Colonel Brighton (Anthony Quayle), who orders him to keep quiet, make his assessment of Faisal's camp, and leave. Lawrence promptly ignores Brighton's commands when he meets Faisal. His knowledge and outspokenness pique the prince's interest.

Brighton advises Faisal to retreat after a major defeat, but Lawrence proposes a daring surprise attack on Aqaba which, if successful, would provide a port from which the British could offload much-needed supplies. While strongly fortified against a naval assault, the town is lightly defended on the landward side. He convinces Faisal to provide fifty men, led by a sceptical Sherif Ali. Two teenage orphans, Daud (John Dimech) and Farraj (Michel Ray), attach themselves to Lawrence as his servants.

They cross the Nefud Desert, considered impassable even by the Bedouins, travelling day and night on the last stage to reach water. Gasim (I. S. Johar) succumbs to fatigue and falls off his camel unnoticed during the night. The rest make it to an oasis, but Lawrence turns back for the lost man alone, risking his own life and winning over Sherif Ali after saving Gasim.

Lawrence persuades Auda abu Tayi (Anthony Quinn), the leader of the powerful local Howeitat tribe, to turn against the Turks. Lawrence's plan is almost derailed when one of Ali's men kills one of Auda's because of a blood feud. Since Howeitat retaliation would shatter the fragile alliance, Lawrence declares that he will execute the murderer himself. Stunned to discover that the culprit is Gasim, he shoots him anyway. The next morning, the intact alliance overruns the Turkish garrison.

Lawrence heads to Cairo to inform Dryden and the new commander, General Allenby (Jack Hawkins), of his victory. During the crossing of the Sinai Desert, Daud dies when he stumbles into quicksand. Lawrence is promoted to major and given arms and money to support the Arabs. He is deeply disturbed, confessing that he enjoyed executing Gasim, but Allenby brushes aside his qualms. He asks Allenby whether there is any basis for the Arabs' suspicions that the British have designs on Arabia. Pressed, the general states they have no such designs.

Lawrence launches a guerrilla war, blowing up trains and harassing the Turks at every turn. American war correspondent Jackson Bentley (Arthur Kennedy) publicises his exploits, making him world famous. On one raid, Farraj is badly injured. Unwilling to leave him to be tortured, Lawrence is forced to shoot him before fleeing.

When Lawrence scouts the enemy-held city of Daraa with Ali, he is taken, along with several Arab residents, to the Turkish Bey (José Ferrer). Lawrence is stripped, ogled, and prodded. For striking out at the Bey, he is severely flogged, sexually abused (offscreen) and then thrown out into the street.

In Jerusalem, Allenby urges him to support his "big push" on Damascus, but Lawrence is a changed, tormented man, unwilling to return. Finally, he relents.

He recruits an army, mainly killers and cutthroats motivated by money, rather than the Arab cause. They sight a column of retreating Turkish soldiers who have just slaughtered the people of Tafas. One of Lawrence's men from the village demands, "No prisoners!" When Lawrence hesitates, the man charges the Turks alone and is killed. Lawrence takes up the dead man's cry, resulting in a massacre in which Lawrence himself participates with relish.

His men then take Damascus ahead of Allenby's forces. The Arabs set up a council to administer the city, but they are desert tribesmen, ill-suited for such a task. Unable to maintain the utilities and bickering constantly with each other, they soon abandon most of the city to the British. Promoted to colonel and immediately ordered home, his usefulness at an end to both Faisal and the British diplomats, a dejected Lawrence is driven away in a staff car.

Read More about Lawrence of Arabia (1962)