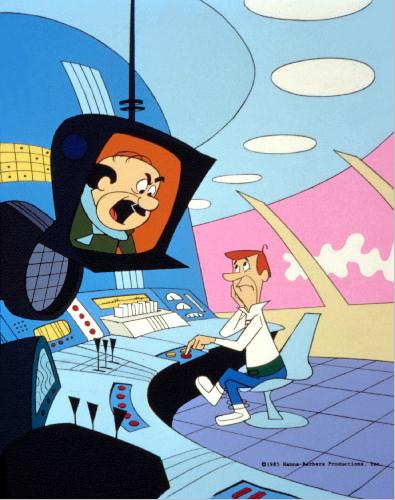 The Jetsons is an American animated sitcom produced by Hanna-Barbera, originally airing in primetime from 1962-1963, then later as part of the weekday/weekend morning programming block called The Funtastic World of Hanna-Barbera, until 1987. New episodes were produced from 1984-1987 as well. It was Hanna-Barbera’s Space Age counterpart to The Flintstones. While the Flintstones live in a world with machines powered by birds and dinosaurs, the Jetsons live in the year 2062 in a futuristic utopia (100 years in the future at the time of the show's debut) of elaborate robotic contraptions, aliens, holograms, and whimsical inventions. The Jetsons are a family residing in Orbit City in the year 2062. The city's architecture is rendered in the Googie style, and all homes and businesses are raised high above the ground on adjustable columns. George Jetson lives with his family in the Skypad Apartments: his wife Jane is a homemaker, their teenage daughter Judy attends Orbit High School, and their early-childhood son Elroy attends Little Dipper School. Housekeeping is seen to by a robot maid, Rosie, which handles chores not otherwise rendered trivial by the home's numerous push-button Space Age-envisioned conveniences. The family has a dog named Astro, which talks with an initial consonant mutation in which every word begins with an "R", as if speaking with a growl. George Jetson's workweek is typical of his era: an hour a day, two days a week. His boss is Cosmo Spacely, the diminutive yet bombastic owner of Spacely Space Sprockets. Spacely has a competitor, Mr. Cogswell, owner of the rival company Cogswell Cogs (sometimes known as Cogswell's Cosmic Cogs). Jetson commutes to work in an aerocar that resembles a flying saucer with a transparent bubble top. Daily life is leisurely, assisted by numerous labor-saving devices, which occasionally break down with humorous results. Despite this, everyone complains of exhausting hard labor and difficulties living with the remaining inconveniences.
Read More about Jetsons, The (1962-1987)