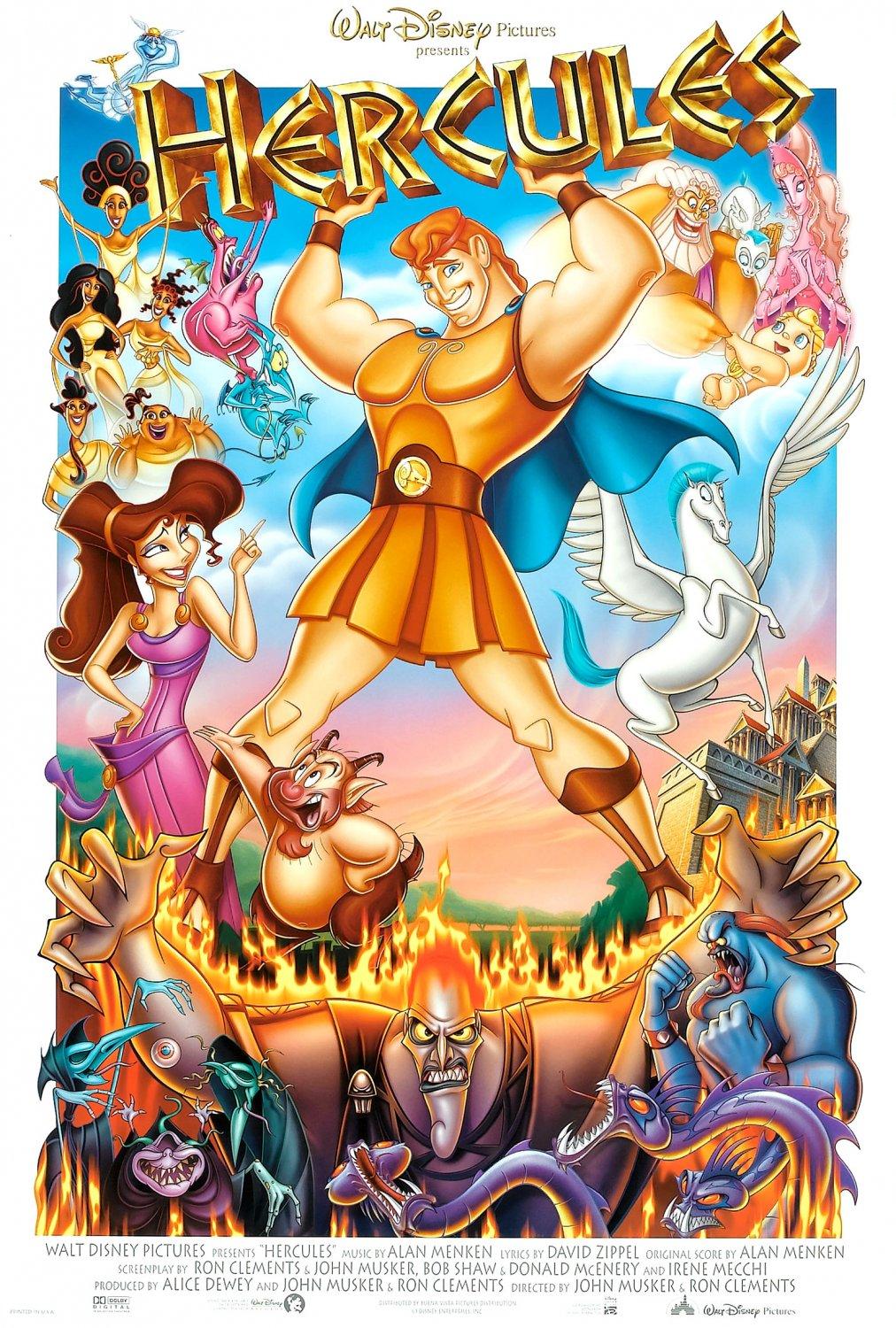 Long after Zeus, ruler of the Greek gods of Mount Olympus, defeats the Titans and locks them deep in the bowels of the earth, he and his wife Hera give birth to a son, Hercules. All the gods of Olympus celebrate Hercules's birth except for Zeus's jealous brother Hades, who was forced by Zeus to work as lord of the dead in the Underworld, and seeks to overthrow his brother. Hades learns from the Fates that in eighteen years, a planetary alignment will reveal the location of where the Titans are trapped, allowing him to free them and take over Olympus, but only if Hercules doesn't interfere. Hades sends his minions Pain and Panic to kidnap Hercules, bring him to Earth, and kill him after giving him a potion that will turn him mortal. However, Pain and Panic are unable to give Hercules the entire potion which, while still making him mortal, allows him to retain his godlike strength. Hercules is then found by a farmer and his wife, who raise him as their own son.

Over the next sixteen years, Hercules grows up into a misfit, his strength seen as a nuisance to all the locals. After being rejected by the townsfolk when he accidentally destroys the marketplace, Hercules questions where he truly belongs. His foster parents reveal how they found him with a medallion bearing the symbol of the gods, so Hercules travels to the Temple of Zeus, where the almighty god's statue comes to life and reveals his past and true lineage. Zeus explains that Hercules can become a god again and return to Olympus if he can become a true hero, so he sets out on his old childhood friend Pegasus to find the satyr Philoctetes—"Phil" for short—a trainer of heroes. Phil has long-since retired after failing to train a successful hero, but is convinced to train Hercules.

After his training is complete, Hercules sets out with Phil and Pegasus to the city of Thebes to prove his newfound worth. Along the way, Hercules saves a woman named Megara—"Meg" for short—from being pestered by the centaur Nessus, and becomes attracted to her. Unbeknownst to Hercules, Meg is in league with Hades after selling her soul to save a man she once loved, but had left her for another woman. Discovering Hercules to still be alive, Hades sets up a trap for him outside of Thebes where he is forced to battle the Hydra. However, Hercules manages to defeat the Hydra, and is praised by all of Thebes as a hero. Hercules is treated like a celebrity, but Zeus informs him that he is not a true hero yet.

Meg is sent by Hades to find Hercules' weakness, but she falls in love with him instead. Phil discovers Meg to be working for Hades and attempts to warn Hercules, but abandons him after an ensuing argument. Realizing that Meg is Hercules' weakness, Hades uses her to make a deal with Hercules in which he must give up his powers for an entire day in exchange for Meg's safety, using this time to free the Titans and take over Olympus, while Hercules is crushed by Meg's deception and loses the will to fight. One of the Titans, a Cyclops, is sent to Thebes to eliminate Hercules. Meg convinces Phil to return to Hercules, motivating him into battling and defeating the Cyclops through improvisation. However, Meg is mortally wounded by a falling column to save Hercules, though it breaks Hades's deal of Meg not being harmed and restores Hercules's powers, allowing him to defeat the Titans. Unfortunately, he is too late to save Meg from dying.

Hercules confronts Hades in the Underworld and offers his soul to reclaim Meg's. Hades accepts, but only if Hercules can reclaim it in the River Styx, which gradually saps his life force as he swims. However, his will to sacrifice his life for Meg awakens Hercules as a true hero and restores his status as an immortal god. Hercules successfully retrieves Meg's soul and punches Hades into the River Styx, where he is dragged to the depths by vengeful souls. Hercules returns Meg's soul to her body and brings her back to life, and is brought to Olympus where the gods welcome him back into his old home. However, Hercules is unable to live without Meg, and Zeus allows him to stay on Earth as a mortal to stay with the one he loves. Zeus creates a constellation of Hercules in the night sky, allowing the world to hail him as a true hero.a