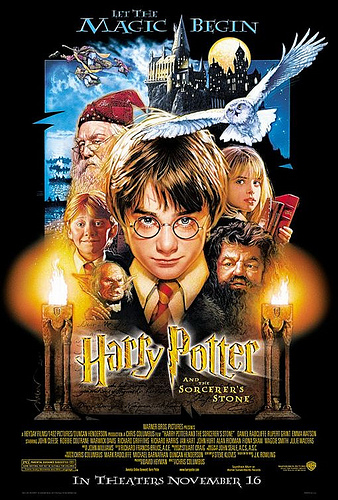 Harry Potter is the most miserable, lonely boy you can imagine. He’s shunned by his relatives, the Dursley’s, that have raised him since he was an infant. He’s forced to live in the cupboard under the stairs, forced to wear his cousin Dudley’s hand-me-down clothes, and forced to go to his neighbor’s house when the rest of the family is doing something fun. Yes, he’s just about as miserable as you can get.

Harry’s world gets turned upside down on his 11th birthday, however. A giant man, Hagrid, informs Harry that he’s really a wizard, and will soon be attending Hogwarts School of Witchcraft and Wizardry. Harry also learns that, in the wizarding world, he’s a hero. When he was an infant the evil Lord Voldemort killed his parents and then tried to kill Harry too. What’s so amazing to everyone is that he couldn’t do it. Somehow Harry survived, and destroyed Voldemort in the process.

When Harry hears all this he doesn’t know what to think. Everything Hagrid tells him turns out to be true, and with a joyful heart Harry starts school in September. He quickly becomes best friends with a boy named Ron Weasley, and before they even make it to Christmas they break tons of school rules when they attack a troll and prevent it from killing fellow student Hermione Granger. After the troll incident the three become inseparable, and Harry is amazed to have found such great friends. He is constantly busy trying to stay on top of mounds of homework, as well as participating in weekly Quidditch practices. Harry is the youngest Quidditch player in over a century, and it’s a game he loves more than anything else at school.

As the year progresses the three friends set out to solve the mystery of the 3-headed dog that is guarding something in a deserted corridor in the school. The figure out that a very valuable object, the Sorcerer’s Stone, is being hidden in the school, although they don’t know why. When one of the professor’s starts acting as if he’s trying to steal it, they quickly take action to circumvent the theft.

Things come to a head when they sneak past the vicious, 3-headed dog and go down into the bowels of the school, determined to save the Stone. Ron and Hermione help Harry get through the challenges set forth to stop the thief, and Harry must go on alone to battle the professor. When he finally gets to the last room, however, he’s astonished to find someone else entirely.

Harry is forced to do battle with the wizard that tried to kill him so many years before, Lord Voldemort. He’s able to save the Sorcerer’s Stone, although he’s almost killed in process, and Dumbledore arrives just in time to save him.

The school year ends spectacularly when Harry, Ron, and Hermione are honored for their service to the school, and Harry leaves to go back to the Dursley’s feeling as if he’s finally found a place where he really belongs.