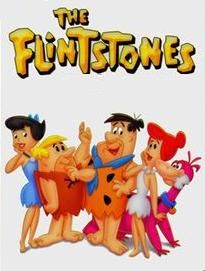 The Flintstones is an animated, prime-time American television sitcom that was broadcast from September 30, 1960, to April 1, 1966, on ABC. The show was produced by Hanna-Barbera Productions. The Flintstones was about Fred Flintstone, a working-class Stone Age man, and his family and his next-door neighbor and best friend, Barney Rubble. The show's continuing popularity rested heavily on its juxtaposition of modern everyday concerns in the Stone Age setting. A common running gag was the use of prehistoric versions of modern technology such as Fred Flintstone's wood, stone and fur car, which is operated by Fred physically running along the ground inside the car, or prehistoric animals acting as various substitutions for modern technology, such as an adult woolly mammoth acting as a shower by spraying water out of its trunk. In addition, audiences were treated to Stone Age adaptations of modern life, such as people living in split level homes, listening to records, and eating out at restaurants. The Flintstones was the most financially successful network animated franchise for three decades, until The Simpsons debuted replacing the Flintstones as America's favorite animated sitcom family. The first three seasons of The Flintstones aired Friday nights at 8:30 Eastern time on ABC, with the first two seasons in black-and-white. Beginning with the third season in 1962, ABC televised the Flintstones in color, one of the first programs in color on that network.[33] Season four and part of season five aired Thursdays at 7:30. The rest of the series aired Fridays at 7:30. In the U.S., syndicated reruns of the series were offered to local stations until 1997, when E/I regulations and changing tastes in the industry led to the show's move to cable television. From the time of Ted Turner's purchase of Hanna-Barbera in 1991, TBS, TNT, and Cartoon Network aired the program. On April 1, 2000, the program moved to Boomerang, where it aired until March 6, 2017 (in its last years on the channel, it had been relegated to a graveyard slot) and returned to the channel on July 30, 2018. Online, the series was made available on the In2TV service beginning in 2006, then the online version of Kids' WB until that service was discontinued in 2015. As of 2017, full episodes are only available in the U.S. on Boomerang's subscription video-on-demand service, with select clips made available on the official YouTube account tied to the revamped Kids' WB website. In 2019, MeTV acquired rerun rights to the series, returning the show to broadcast television for the first time in over 20 years. Following the show's cancellation in 1966, a film based upon the series was created. The Man Called Flintstone was a musical spy caper that parodied James Bond and other secret agents. The movie was released to theaters on August 3, 1966, by Columbia Pictures. It was released on DVD in Canada in March 2005 and in United States in December 2008.