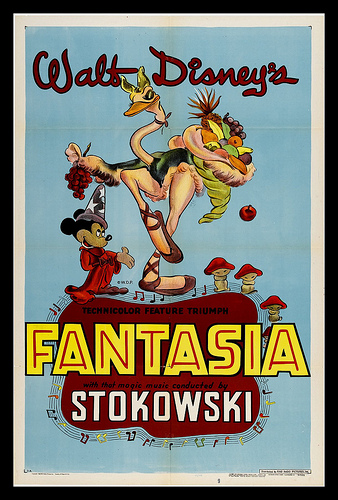 Fantasia is a 1940 American animated film produced by Walt Disney and released by Walt Disney Productions. With story direction by Joe Grant and Dick Huemer, and production supervision by Ben Sharpsteen, it is the third Disney animated feature film. The film consists of eight animated segments set to pieces of classical music conducted by Leopold Stokowski, seven of which are performed by the Philadelphia Orchestra. Music critic and composer Deems Taylor acts as the film's Master of Ceremonies, providing a live-action introduction to each animated segment. Disney settled on the film's concept as work neared completion on The Sorcerer's Apprentice, an elaborate Silly Symphonies short designed as a comeback role for Mickey Mouse, who had declined in popularity. As production costs grew higher than what it could earn, Disney decided to include the short in a feature-length film with other segments set to classical pieces. The soundtrack was recorded using multiple audio channels and reproduced with Fantasound, a pioneering sound reproduction system that made Fantasia the first commercial film shown in stereophonic sound. Fantasia was first released as a theatrical roadshow held in thirteen U.S. cities from November 13, 1940. While acclaimed by critics, it was unable to make a profit due to World War II cutting off distribution to the European market, the film's high production costs, and the expense of leasing theaters and installing the Fantasound equipment for the roadshow presentations. The film was subsequently reissued multiple times with its original footage and audio being deleted, modified, or restored in each version. Fantasia is the 23rd highest-grossing film of all time in the U.S. when adjusted for inflation. The Fantasia franchise has grown to include video games, Disneyland attractions, and a live concert. A sequel, Fantasia 2000, co-produced by Roy E. Disney, was released in 1999. Fantasia has grown in reputation over the years and is now widely acclaimed; in 1998 the American Film Institute ranked it as the 58th greatest American film in their 100 Years...100 Movies and the fifth greatest animated film in their 10 Top 10 list. INCLUDED IN THE FILM: Toccata and Fugue in D Minor / Musical score: Johann Sebastian Bach – Toccata and Fugue in D Minor BWV 565 (Stokowski's own orchestration) Nutcracker Suite / Musical score: Pyotr Ilyich Tchaikovsky – Nutcracker Suite Op. 71a The Sorcerer's Apprentice / Musical score: Paul Dukas – The Sorcerer's Apprentice The Rite of Spring / Musical score: Igor Stravinsky – The Rite of Spring Intermission/Meet the Soundtrack / Directed by Ben Sharpsteen and David D. Hand The Pastoral Symphony / Musical score: Ludwig van Beethoven – Symphony No. 6 in F, Op.68 "Pastorale" Dance of the Hours / Musical score: Amilcare Ponchielli – La Gioconda: Dance of the Hours. Night on Bald Mountain/Ave Maria / Musical score: Modest Mussorgsky – Night on Bald Mountain and Franz Schubert – Ave Maria
Read More about Fantasia (1940)