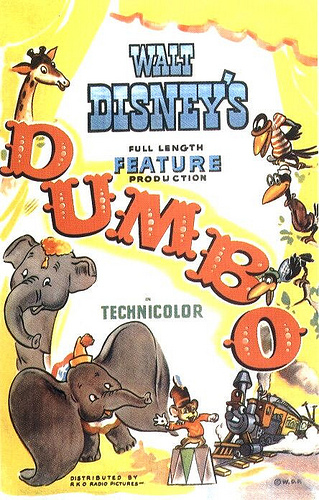 While circus animals are being transported, Mrs. Jumbo, one of the elephants, receives her baby from a stork. The baby elephant is quickly taunted by the other elephants because of his large ears, and they nickname him "Dumbo". Once the circus is set up, Mrs. Jumbo loses her temper at a group of boys for making fun of her son, and she is locked up and deemed mad. Dumbo is shunned by the other elephants and with no mother to care for him, he is now alone, except for a self-appointed mentor and protector, Timothy Q. Mouse, who feels sympathy for Dumbo and becomes determined to make him happy again. The circus director makes Dumbo the top of an elephant pyramid stunt, but Dumbo causes the stunt to go wrong, injuring the other elephants and bringing down the big top. Dumbo is made a clown as a result, and plays the main role in an act that involves him falling into a vat of pie filling. Despite his newfound popularity and fame, Dumbo hates this job and is now more miserable than ever. To cheer Dumbo up, Timothy takes him to visit his mother. On the way back Dumbo cries and then starts to hiccup so Timothy decides to take him for a drink of water from a bucket which, unknown to him, has accidentally had a bottle of champagne knocked into it. As a result, Dumbo and Timothy both become drunk and see hallucinations of pink elephants. The next morning, Dumbo and Timothy wake up in a tree. Timothy wonders how they got up in the tree, and concludes that Dumbo flew up there using his large ears as wings. With the help of a group of crows, Timothy is able to get Dumbo to fly again, using a psychological trick of a "magic feather" to boost his confidence. Back at the circus, Dumbo must perform his stunt of jumping from a high building, this time from a much higher platform. On the way down, Dumbo loses the feather and Timothy tells him that the feather was never magical, and that he is still able to fly. Dumbo is able to pull out of the dive and flies around the circus. After this performance, Dumbo becomes a media sensation, Timothy becomes his manager, and Dumbo and Mrs. Jumbo are given a private car on the circus train.
Read More about Dumbo (1941)