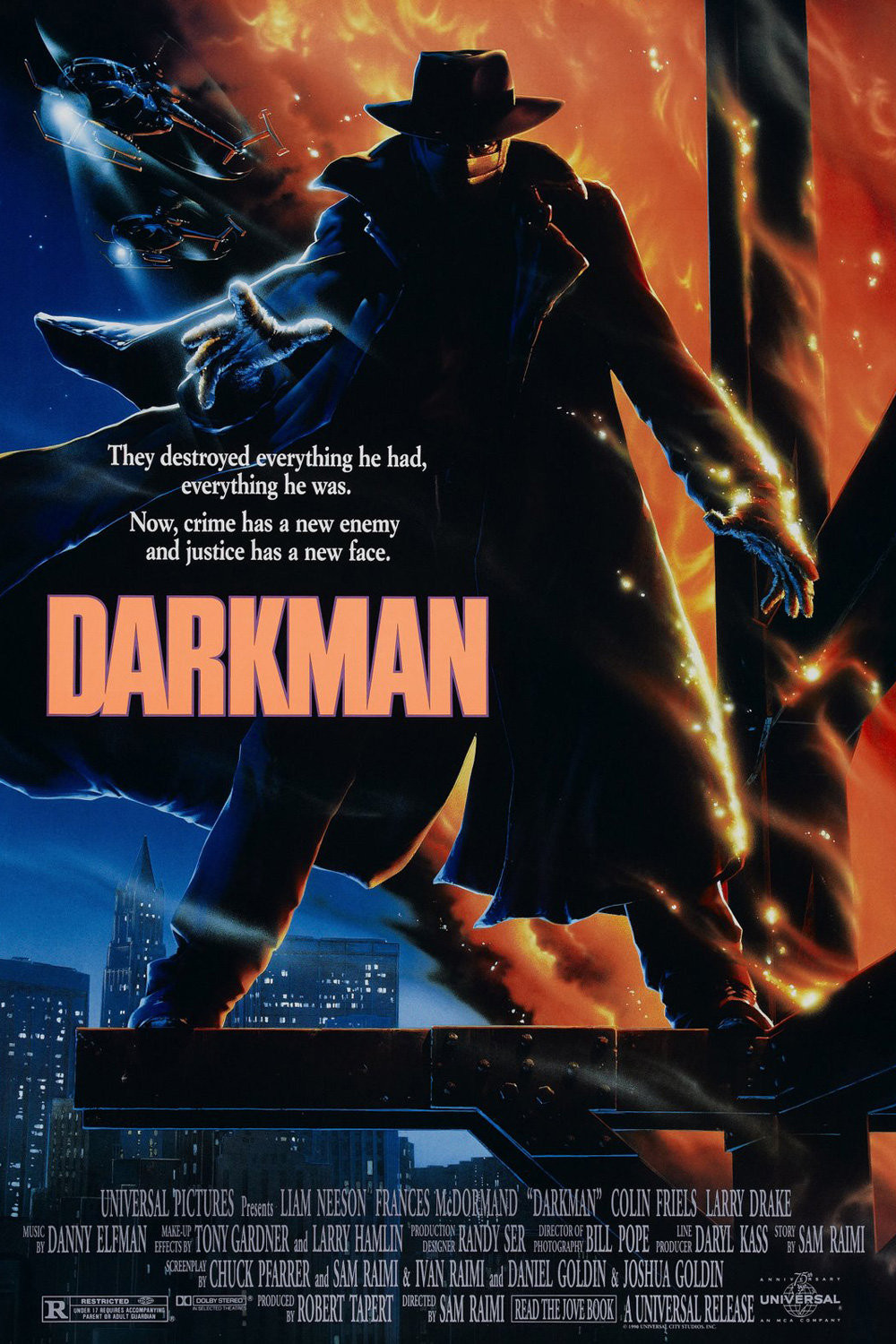 Scientist Dr. Peyton Westlake (Liam Neeson) is developing a new type of synthetic skin to aid burn victims. He is frustrated with a flaw that causes the skin to rapidly disintegrate after being exposed to light for 99 minutes.

Westlake's girlfriend, attorney Julie Hastings (Frances McDormand), discovers an incriminating document proving that corrupt developer Louis Strack (Colin Friels) has been bribing members of the zoning commission. Before she leaves, Westlake asks her to marry him, but she hesitates. When she confronts Strack, he confesses, but shows Julie what he's been planning: To design a brand new city which would create a substantial amount of new jobs. He also warns Julie to keep her guard up as mobster Robert Durant (Larry Drake) would do anything to get his hands on the document.

Back at Westlake's lab, the power and lights die out. When Westlake asks his assistant Yakatito how long the skin's been holding, they are both astounded as they find that the skin is stable after 100 minutes. Westlake deduces that the synthetic skin is photosensitive. Their joy is short lived as Durant and his henchmen show up and demand the Bellasarious Memorandum (The incriminating document Julie found earlier).

While searching for the document, Durant and his gang attacks Westlake and kills Yakatito. After they find the document, they rig the lab to explode, with Julie watching the explosion just before pondering whether or not to marry Westlake. The blast throws Westlake through a window and into the river. He survives (thought to be dead by Julie, who attends his funeral), but is hideously burned. He is brought to a hospital and subjected to a radical treatment which cuts the nerves of the spinothalamic tract so pain is no longer felt. However, he also loses his tactile sensation. Removing this sensory input gives him enhanced strength due to adrenal overload and keeps his injuries from incapacitating him, but it also mentally destabilizes him.

After mourning the loss of his lab and realizing how badly burnt he has become, Westlake re-establishes the lab in a condemned building, using digitization to create a mask of his original face. The process is long, and in the meantime, Westlake murders the henchman Ricky in cold blood and studies his enemies in order to subdue & impersonate Pauly (another henchman), subsequently causing his death afterward by Durant.

When his face mask is complete, he manages to convince Julie that he is indeed alive, and that he was in a coma rather than being dead. He is aware of Julie seeing Strack after his supposed death and eventually confronts her, to which she responds that Strack only comforted her. Westlake does not tell Julie about his condition, but asks her various questions on whether she would accept him regardless or not. Westlake now has a full clock schedule: Making the skin last longer than 99 minutes, visiting Julie, studying his enemies and even mimicking their voice patterns. His next excursion has him impersonating Durant himself, causing confusion among him and his henchmen.

The next time Westlake and Julie have a date at the carnival, an altercation causes Westlake to lose his temper and inadvertently reveals to Julie that there is indeed something wrong with him. She follows him as he flees (his 99 minutes were up), and when she discovers that he was using masks to hide his true face, she calls out to Peyton that she still loves him regardless.

Julie later tells Strack that she can no longer see him, and after discovering the Bellasarious Memorandum on his desk while he was on the phone, she confirms that Strack was collaborating with Durant the entire time. She tells him that Westlake is still alive, but Strack tells her that as long as he has the memorandum, no charges can be filed. When Julie leaves, Durant enters and is told by Strack to kill both Julie and Westlake.

Westlake eventually succeeds in killing Durant and all of his henchmen (except for the one with the wooden gun leg, whose fate is unknown). Westlake impersonates Durant one final time, but is seen through by Strack, who fights him on an unfinished building floor 650 feet from the ground. When Westlake gets the upper hand, Strack calls his bluff by saying that killing him would not be something he could live with. Westlake then kills Strack, saying to himself: "I'm learning to live with a lot of things."

Unfortunately, when Julie tries to convince Westlake that he can still return to his old life, Westlake declines, saying that he has now become a monster and that the Peyton she knew was gone. In the final scene he runs away from Julie as they exit an elevator and is seen from behind pulling on a mask which, when he turns around, reveals the face of Bruce Campbell. During this scene, Westlake can be heard off-screen: "I am everyone and no one. Everywhere. Nowhere. Call me... Darkman."