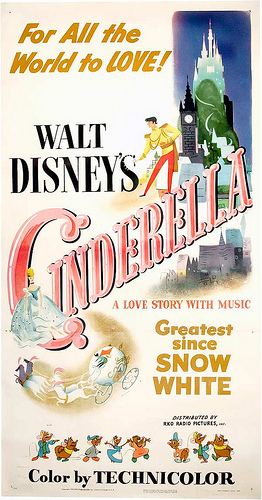 Once there was a widower who married a proud and haughty woman as his second wife. She had two daughters who were equally vain. By his first wife, he'd had a beautiful young daughter who was a girl of unparalleled goodness and sweet temper. The Stepmother and her daughters forced the first daughter to complete all the housework. When the girl had done her work, she sat in the cinders, which caused her to be called "Cinderella". The poor girl bore it patiently, but she dared not tell her father, who would have scolded her; his wife controlled him entirely.

One day the Prince invited all the young ladies in the land to a ball so he could choose a wife. As the two Stepsisters were invited, they gleefully planned their wardrobes. Although Cinderella assisted them and dreamed of going to the dance, they taunted her by saying a maid could never attend a ball.

As the sisters swept away to the ball, Cinderella cried in despair. Her Fairy Godmother magically appeared and vowed to assist Cinderella in attending the ball. She turned a pumpkin into a coach, mice into horses, a rat into a coachman, and lizards into footmen. She then turned Cinderella's rags into a beautiful gown, complete with a delicate pair of glass slippers. The Godmother told her to enjoy the ball, but return before midnight for the spells would be broken.

At the ball, the entire court was entranced by Cinderella, especially the Prince, who never left her side. Unrecognized by her sisters, Cinderella remembered to leave before midnight. Back home, Cinderella graciously thanked her Godmother. She then greeted the Stepsisters who enthusiastically talked of nothing but the beautiful girl at the ball.

When another ball was held the next evening, Cinderella again attended with her Godmother's help. The Prince became even more entranced. However, this evening she lost track of time and left only at the final stroke of midnight, losing one of her glass slippers on the steps of the palace in her haste. The Prince chased her, but outside the palace, the guards had seen only a simple country wench leave. The Prince pocketed the slipper and vowed to find and marry the girl to whom it belonged. Meanwhile, Cinderella kept the other slipper, which had not disappeared when the spell had broken.

Cinderella returned to the palace where she married the Prince, and the Stepsisters also married two lords.

The moral of the story is that beauty is a treasure, but graciousness is priceless. Without it nothing is possible; with it, one can do anything.

Cinderella is classified as Aarne-Thompson type 510A, the persecuted heroine. Others of this type include The Sharp Grey Sheep, The Golden Slipper, The Story of Tam and Cam, Rushen Coatie, Fair, Brown and Trembling and Katie Woodencloak.[