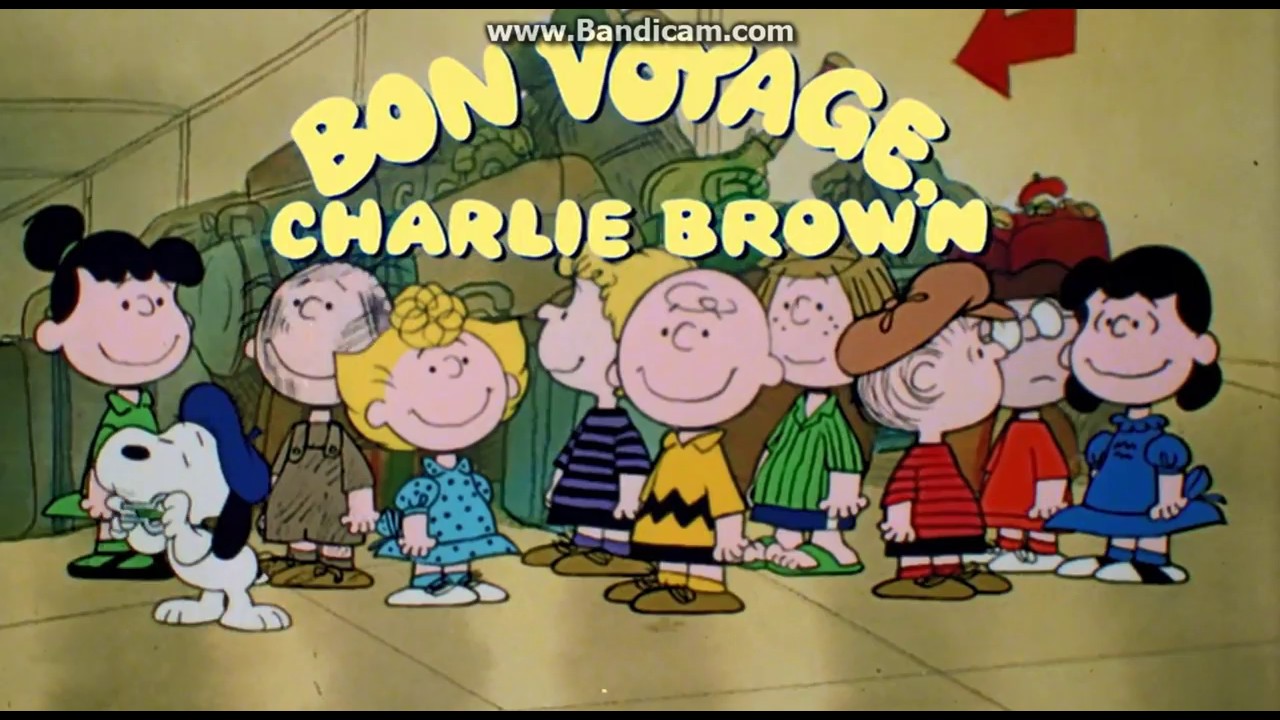 Bon Voyage Charlie Brown (and Don't Come Back!!) is a 1980 American animated film produced by United Feature Syndicate and distributed by Paramount Pictures, directed by Bill Melendez and Phil Roman. It was the fourth full-length feature film to be based on the Peanuts comic strip.

Peanuts creator Charles M. Schulz wrote that he came up with the idea for Bon Voyage Charlie Brown while visiting the Château Malvoisin, where he was stationed briefly as a soldier during World War II. The castle plays a large role in the film.

At Charlie Brown's school, Linus Van Pelt introduces to his class two French students, Babette and Jacques, who will be spending two weeks there in order to get accustomed to the United States. In exchange, Charlie Brown and Linus are chosen to go to France. Charlie Brown heads home and invites Snoopy and Woodstock to go with him. He gets a call from Peppermint Patty, who tells him that she and Marcie were also chosen to go to France as a student exchange. Charlie Brown also gets a letter from France, but cannot read it because it is written in French. He is not very positive about the trip because of the letter he got, but Marcie, who has been studying French, translates the letter, explaining that Charlie Brown has been invited to stay at a fictional French chateau, the Château du Mal Voisin (House of the Bad Neighbor).

They arrive first in London, where Snoopy leaves the group temporarily to play tennis at Wimbledon, where he gets in a dispute with the referee for a judgment call about the ball being in or out. He loses his temper, causing him to be banned from the grounds. When they arrive across the English Channel in France via the hovercraft, they pick up a Citroën 2CV, which must be driven by Snoopy as none of the others have a drivers' licence, though Snoopy enjoys grinding the gears out of it. Upon arrival, the four go to their respective homes. Patty and Marcie go to stay at a farm, where they meet a boy named Pierre, who immediately attracts their attention. It is obvious that Marcie and Pierre have a spark between them - obvious to everyone except Patty, who manages to convince herself that Pierre likes her. Meanwhile, Charlie Brown, Linus, Snoopy, and Woodstock go to the chateau, which they find is apparently abandoned, though somebody keeps leaving food for them and making their beds after they leave for school. In reality, the chateau is owned by an unfriendly baron, and the person leaving Charlie Brown and Linus food is the baron's kindly niece, Violette Honfleur.

Linus goes inside the chateau to investigate and tracks Violette down and demands what is going on. Violette says that although her uncle is irritable, she must remember what a U.S. Army soldier had done for her family by helping them out during World War I. Violette shows Linus a picture of the soldier, and he comments that the soldier looks like Charlie Brown and it is revealed that the soldier is actually Charlie Brown's grandfather, Silas Brown. The baron returns home and Violette tries to hide Linus, but she accidentally drops a candle, engulfing a fire in the chateau's attic. Charlie Brown runs to get Peppermint Patty and Marcie and Pierre calls the fire department, while Snoopy and Woodstock get an old fashioned fire hose from a shed. Charlie Brown, Peppermint Patty, Marcie, and Pierre rescue Linus and Violette and Snoopy uses the hose to control the fire until the fire department finally arrives to help.

Thankful for the chateau's rescue, the baron has a change of heart and allows the gang inside, and Charlie Brown learns the truth behind the mysterious letter he received from Violette, and he, Snoopy, Linus, Patty, and Marcie leave their new friends to see more of the French countryside, and eventually return home to the United States as the film comes to an end.