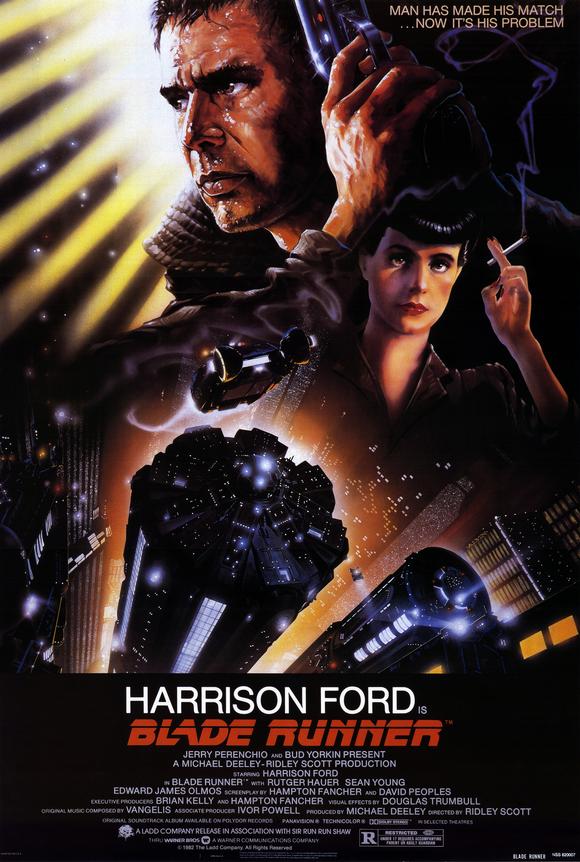 Blade Runner, released in 1982 is Ridley Scott's sci-fi film noir set in dystopian Los Angeles, November 2019. Retired police officer Rick Deckard (Harrison Ford) is detained at a noodle bar by officer Gaff (Edward James Olmos). His former supervisor, Bryant (M. Emmet Walsh), tells him that several "replicants"—biologically engineered humanoids who serve as soldiers and slaves in off-world colonies—have escaped, and have come to Earth illegally. As a "blade runner" while active, Deckard's job was to track down replicants on Earth and "retire" them.

Bryant shows him a video of another blade runner, Holden (Morgan Paull), administering a Voight-Kampff test, which distinguishes humans from replicants based on their empathic response to questions. The subject of the test, Leon (Brion James), shoots Holden when it is likely he will be exposed as a replicant.

Deckard agrees to track down Leon and three other replicants—Roy Batty (Rutger Hauer), Zhora (Joanna Cassidy) and Pris (Daryl Hannah)—after Bryant threatens him. These replicants—Tyrell Corporation Nexus-6 models—have a four-year lifespan as a fail-safe to prevent them from developing emotions and desire for independence. They may have come to Earth to try to have these lifespans extended.

Deckard is teamed with Gaff and sent to the Tyrell Corporation to ensure that the Voight-Kampff test works on Nexus-6 models. While there, Deckard discovers that Tyrell's (Joe Turkel) assistant Rachael (Sean Young) is an experimental replicant who believes she is human; Rachael's consciousness has been enhanced with childhood memories from Tyrell's niece. As a result, a more extensive Voight-Kampff test is required to identify her as a replicant. During the testing Rachael suggests that Deckard himself be tested.

Roy and Leon enter the eye manufacturing laboratory of Chew (James Hong); under interrogation, Chew directs them to J.F. Sebastian (William Sanderson) as their best chance of meeting Tyrell. Rachael visits Deckard at his apartment to prove her humanity to him, showing him a family photo. She leaves in tears after Deckard tells her that her memories are implants. Pris meets J.F. Sebastian at his apartment in the Bradbury Building where he lives with his manufactured companions. Deckard finds an image of Zhora in Leon's photos.

Deckard goes to an area of the city where genetically engineered animals are sold to analyze a scale found in Leon's bathroom, learning that it came from a snake made by Abdul Ben Hassan (Ben Astar). Hassan directs Deckard to a strip club where Zhora works. Deckard "retires" Zhora, whose death takes place in slow motion as she struggles to flee. Deckard meets with Bryant shortly after and is told to add Rachael to his list of retirements, as she has disappeared from the Tyrell Corporation headquarters. Deckard spots Rachael in the crowd but is attacked by Leon. Rachael saves Deckard by killing Leon, and the two return to Deckard's apartment, where he prevents Rachael from leaving and gets her to say she wants to have sex with him.

Roy arrives at Sebastian's apartment and tells Pris they are the only ones left. They gain Sebastian's help after explaining their plight. Roy discovers that Sebastian is suffering from a genetic disorder that accelerates his aging. Under the pretext of Sebastian informing Tyrell of a winning move in a game of correspondence chess that they are playing, Roy and Sebastian enter Tyrell's penthouse. Roy demands an extension to his lifespan from his maker. Tyrell explains that Tyrell Corporation never found a way to accomplish this. Roy asks absolution for his sins, confessing that he has done "questionable things". Tyrell dismisses Roy's guilt, praising Roy's advanced design and his accomplishments. He tells Roy to "revel in his time", to which Roy comments "Nothing the god of biomechanics wouldn't let you into heaven for". Roy then holds Tyrell's head in his hands, gives him a kiss, and kills him. Sebastian runs for the elevator, with Roy following. Roy rides the elevator down alone, and Sebastian is not seen again.

Deckard arrives at Sebastian's apartment and is ambushed by Pris. He retires her just as Roy returns. Roy punches through a wall, grabbing Deckard's right arm, and breaks two of his fingers in retaliation for Zhora and Pris. Roy releases Deckard and gives him time to run before he begins hunting him through the Bradbury Building. The symptoms of Roy's limited lifespan worsen and his right hand begins failing; he jabs a nail through it to regain control. Roy forces Deckard to the roof. As Deckard attempts to escape Roy, he leaps across to another building but falls short and ends up hanging from a rain-slicked girder. As Deckard loses his grip, Roy, having made the same leap effortlessly, seizes his arm and hauls him onto the roof. As Roy's life ends, he delivers a soliloquy on his life "I've seen things you people wouldn't believe: Attack ships on fire off the shoulder of Orion; I've watched c-beams glitter in the dark near the Tannhauser Gate. All those moments will be lost in time; like tears in rain. Time to die."

Gaff arrives and shouts over to Deckard, "It's too bad she won't live; but then again, who does?" Deckard returns to his apartment to find Rachael alive. As they leave, Deckard finds an origami unicorn, a calling card left by Gaff. Depending on the version, the film ends with Deckard and Rachael either leaving the apartment block to an uncertain future or driving through an idyllic pastoral landscape.

For more information about Blade Runner check out the IMDB page and this interview with Ridley Scott about the film.