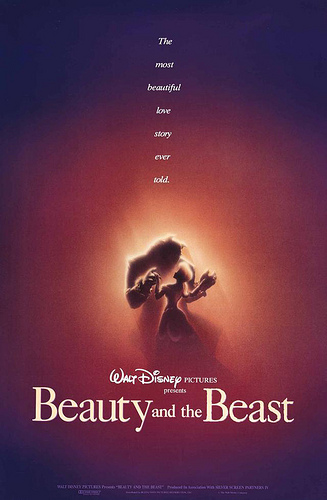 In the film's prologue, an enchantress disguised as an old beggar woman offers a young prince a rose in exchange for a night's shelter. When he turns her away, she transforms him into an ugly Beast and turns his servants into furniture and other household items. She gives him a magic mirror that will enable him to view faraway events, and she gives him the rose, which will bloom until his 21st birthday. He must love and be loved in return before all the rose's petals have fallen off, or he will remain a Beast forever.

Ten years later, a beautiful but unusual young woman named Belle lives in a nearby French village with her father Maurice, who is an inventor. Belle loves reading and yearns for a life beyond the village. She is courted by the arrogant local hero, Gaston, but has no interest in him.

Maurice's latest invention is a wood-chopping machine. When he rides off to display the machine at a fair, he loses his way in the woods and stumbles upon the Beast's castle, where he meets the transformed servants Lumiere, Mrs. Potts and her son Chip, and Cogsworth. The Beast imprisons Maurice, but Belle is led back to the castle by Maurice's horse and offers to take her father's place. When the Beast agrees to this and sends him home, Maurice tells Gaston and the other villagers what happened, but they think he has lost his mind, so he goes to rescue her alone.

Meanwhile, Belle refuses the Beast's invitation to dinner, and the Beast orders his servants not to let her eat, but Lumiere serves her dinner anyway and Cogsworth gives her a tour of the castle. When she finds the rose in a forbidden area, the Beast angrily chases her away.

Frightened, Belle tries to escape, but she and her horse are attacked by wolves. After the Beast rescues her, she nurses his wounds, he gives her the castle library as a gift, and they become friends. Later, they have an elegant dinner and a romantic ballroom dance. When he lets her use the magic mirror, she sees her father dying in the woods and, with only hours left before the rose wilts, the Beast allows her to leave, giving her the mirror to remember him by. This horrifies the servants, who fear they will never be human again. As he watches her leave, the Beast admits to Cogsworth that he loves Belle.

Belle finds Maurice and takes him home, but Gaston arrives with a lynch mob. Unless she agrees to marry Gaston, the manager of the local madhouse will lock her father up. Belle proves Maurice sane by showing them the Beast with the magic mirror, but when she says the Beast is her friend and calls Gaston a "monster", he becomes murderously jealous, arouses the mob's anger against the Beast, and leads them to the castle to kill him. He locks Belle and Maurice in a basement, but Chip, who hid himself in Belle's baggage, chops the basement door apart with Maurice's machine.

While the servants successfully drive the mob out of the castle, Gaston finds the Beast and attacks him. The Beast is initially too depressed to fight back, but he regains his will when he sees Belle arriving at the castle. After winning a heated battle, the Beast spares Gaston's life and climbs up to a balcony where Belle is waiting. Gaston follows the Beast and stabs him from behind, but loses his footing and falls to his death.

As the Beast dies from his injuries, Belle whispers that she loves him, breaking the spell just before the last petal drops from the rose. The Beast comes back to life, and he and the servants become human again. The last scene shows Belle and the prince dancing in the ballroom as her father and the servants happily watch them.