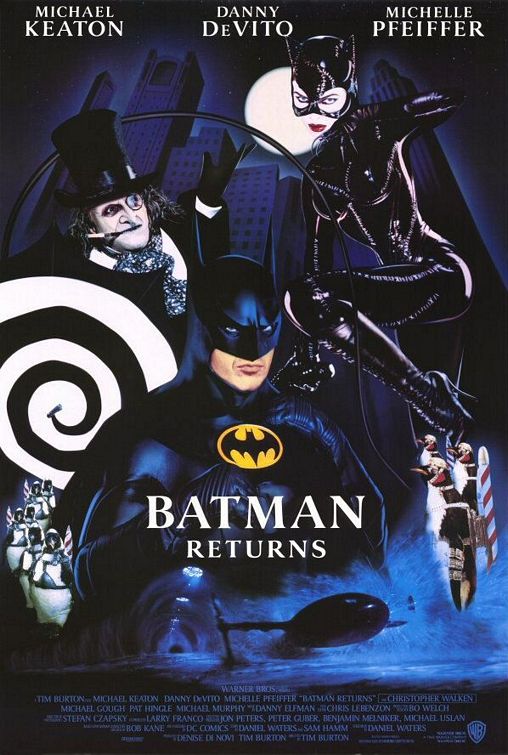 A deformed baby boy is thrown into Gotham City's river by his horrified parents. Thirty-three years later, the child, Oswald Cobblepot, resurfaces as the hideous Penguin (Danny DeVito), who blackmails Max Shreck (Christopher Walken) into helping him discover the identity of his parents. When the Penguin's plight becomes news, Shreck hatches a plan to recall Gotham City's current mayor and elect Cobblepot in his place, in order to cement his control over the city and complete the power plant project he has been working on. Batman (Michael Keaton) is unconvinced by the Penguin, believing that he and his gang are responsible for several child murders. Meanwhile, Shreck throws his secretary, Selina Kyle (Michelle Pfeiffer), from the top of his company's building when she discovers the true nature of his plans: to build a super power station and drain Gotham of its electricity.

Resuscitated by a group of cats, Selina returns home and designs a new costume, becoming Catwoman. Selina, meanwhile, is being romanced by Batman's alter-ego Bruce Wayne, a situation complicated by Catwoman's teaming with the Penguin in an effort to rid Gotham of Batman. When Batman exposes the Penguin's villainous ways, thereby ruining his political chances, the Penguin mounts an attack to kill all of Gotham's first-born infants. Batman foils his scheme and Catwoman, after killing Shreck, is presumed dead. The Penguin, having been wounded during his fight with Batman, dies from his injuries. Some time later, Bruce is driving around the city at night with butler Alfred Pennyworth (Michael Gough), thinking he sees Selina's shadow on a wall. Alfred stops the car and Bruce searches for Selina in vain. He does find Selina's cat, however, which he takes with him and leaves. The camera then pans up to the top of the city, amidst the sky scrapers. As the Bat-Signal lights up the night sky, Catwoman emerges from a rooftop, gazing at it.