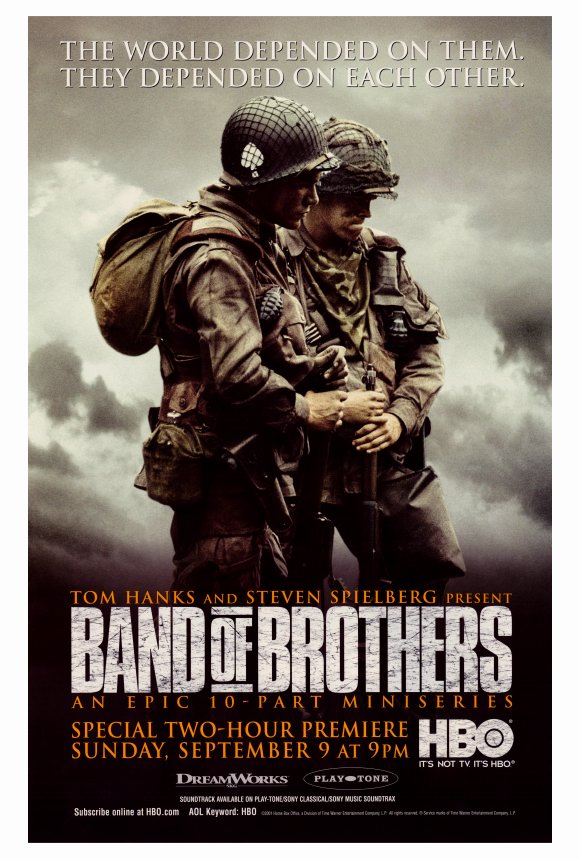 Band of Brothers is a 2001 ten-part television World War II miniseries based on the book of the same title written by historian and biographer Stephen Ambrose. The executive producers were Steven Spielberg and Tom Hanks, who had collaborated on the World War II film Saving Private Ryan (1998). The episodes first aired in 2001 on HBO and are still run frequently on various TV networks around the world.

The narrative centers on the experiences of E Company ("Easy Company") of the 2nd Battalion, 506th Parachute Infantry Regiment assigned to the 101st Airborne Division of the United States Army. The series covers Easy's basic training at Toccoa, Georgia, the American airborne landings in Normandy, Operation Market Garden, the Battle of Bastogne and on to the end of the war, including the taking of the Kehlsteinhaus (Hitler's Eagle's Nest).

The events portrayed are based on Ambrose's research and recorded interviews with Easy Company veterans. A large amount of literary license was taken with the episodes, with several differences between recorded history and the film version. All of the characters portrayed are based on actual members of Easy Company; some of them can be seen in prerecorded interviews as a prelude to each episode (their identities, however, are not revealed until the close of the finale). Spielberg and Hanks also produced the companion miniseries called The Pacific that premiered in March 2010. This followed the campaign against the Japanese Army, who would rather die than surrender until Hiroshima.

The title for the book and the series comes from a famous St. Crispin's Day Speech delivered by the character of Henry V of England before the Battle of Agincourt in William Shakespeare's Henry V; Act IV, Scene 3. A passage from the speech is quoted on the first page of the book, and is also quoted by Carwood Lipton in the final episode.