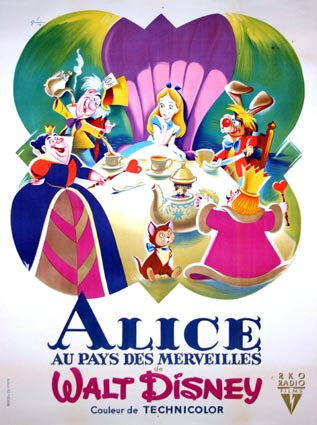 On the bank of a tranquil river, Alice (Kathryn Beaumont) grows bored listening to her older sister read aloud from a history book about William I of England. Alice's sister scolds her, gently but firmly, for her lack of attention. At that moment, Alice dreams of living in a world of nonsense ("A World of My Own", as she explains and sings to her little kitten Dinah). Just then, Alice sees a White Rabbit (Bill Thompson) wearing a waistcoat and carrying a large pocket watch. She and Dinah follow him into a rabbit hole, where Alice suddenly falls down into a deep well, leaving Dinah behind. At the bottom, she follows the Rabbit into a large chamber-like hall, but he escapes through a tiny door. The Doorknob (Joseph Kearns) suggests Alice drink from a bottle marked "Drink me." The contents shrink her to a tiny fraction of her original size. The door is locked, and the key appears on the table, which she can not reach. The Doorknob directs her to a cookie marked "Eat me." The cookie makes her grow so large that her head hits the ceiling. She begins to cry; her massive tears flood the room. The Doorknob points out that the "Drink me" bottle still has some fluid left inside, so she finishes the last drop. She becomes so small that she drops inside the bottle. Both she and the bottle drift through the doorknob's keyhole mouth and out to a sea made from Alice's tears. On shore, a Dodo bird (Thompson) leads a group of animals in a futile caucus-race to get dry. Alice meets Tweedledum and Tweedledee (J. Pat O'Malley), two fat twin brothers who recite "The Walrus and the Carpenter", in a sequence that first appeared in Through the Looking-Glass. After sneaking away to the White Rabbit's house, Alice is at first mistaken by him for his maidservant; and then grows to such a large size that she gets stuck inside the house. The Dodo tries to help by first sending Bill the Lizard Chimney Sweep down the chimney, and then setting the house on fire; but Alice eats a carrot from the garden and shrinks down to three inches. Alice sings "All in the Golden Afternoon" with a garden of talking flowers, who originally appeared in Chapter 3 of Through the Looking-Glass Alice chases after the Rabbit again, and in another example of a vignette borrowed from Through the Looking-Glass, she finds herself in a garden of talking flowers and strange insects. The flowers at first befriend Alice, but then mistake her for a weed and angrily drive her out of the flowerbed before she can "take root." She engages a hookah-smoking caterpillar who turns into a butterfly, though not before giving her cryptic advice about the mushroom she is sitting on. Alice breaks off two pieces and nibbles them alternately (first growing very large and unintentionally aggravating a Nesting Mother Bird (Queenie Leonard), who accuses Alice of being a "serpent", then shrinking very small). Finally Alice manages to restore herself to her normal size and stores the pieces in her apron pockets. Alice receives mysterious directions from the Cheshire Cat (Sterling Holloway), an eerily grinning feline that can disappear and reappear at will, which lead her to the garden of the March Hare (Jerry Colonna), who is celebrating his "unbirthday" with the Mad Hatter (Ed Wynn) and the Dormouse. Alice, growing tired of their rudeness and wackiness, decides to go home, abandoning her pursuit of the White Rabbit. She is lost and despondent among the strange creatures (See Below) of the Tulgey Wood, until the Cheshire Cat reappears and shows her a short-cut out of the forest and into the garden of the Queen (and King) of Hearts. In the hedge maze garden, Alice meets some playing cards painting white roses red. The White Rabbit heralds the arrival of the bellicose Queen of Hearts (Verna Felton), the diminutive King (Dink Trout), and a card army. She invites Alice to a strange game of croquet using flamingos as mallets, hedgehogs as balls, and card soldiers as wickets. The Cheshire Cat plays a prank on the Queen, who blames Alice and orders her execution. The King suggests that Alice is to be put on trial instead. At the trial, Alice's nonsensical acquaintances (the Mad Hatter, the March Hare, and the Dormouse) are of no help to her. The Cheshire Cat appears and causes enough distraction to allow Alice to eat the remaining portions of mushroom, causing her to grow to gigantic proportions. At this size, Alice scolds the terrified Queen for her rash behavior, but then starts shrinking back to her normal size all too soon. At the Queen's command of "Off with her head!" all the crazy inhabitants of Wonderland give chase. Coming back to the Doorknob, Alice is told by him that he is still locked, but that she is already on the other side. Looking through the keyhole, Alice sees herself asleep in the park. As the mob draws nearer, she calls, "Alice, wake up!" to her sleeping self until she gradually awakens from the dream to the sound of her sister's voice. The two of them return home for teatime; while Alice muses on her adventures in Wonderland and realizes that perhaps logic and reason exist for a purpose, her sister realizes affectionately that Alice is still young, but will grow-up in time.
Read More about Alice in Wonderland (1951)