This great Ursula production cel and matching drawing from Disney TV captures her color, drama, and character perfectly. A great piece for fans of The Little Mermaid and villains!

Here is an image of the matching drawing: 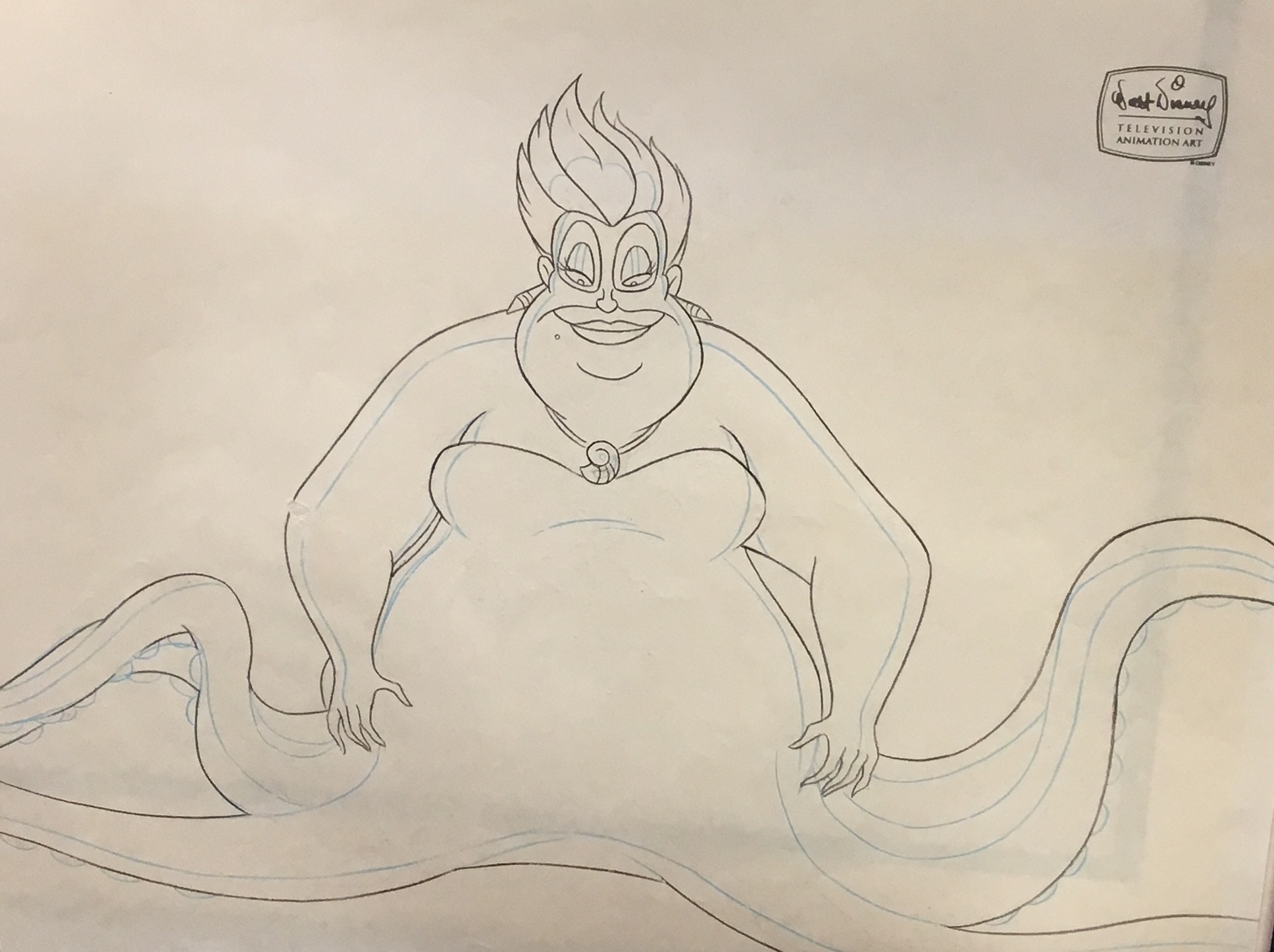 Ursula is a villain who first appeared in the 1989 Disney film, The Little Mermaid as the main antagonist. She's voiced by Pat Carroll, and is based on "herself" in the Hans Christian Anderson's story "The Little Mermaid". In the original story, she's a neutral enabler, but for Disney's adaptation, the character was modified into a full-fledged antagonist and lays a larger role in the overall story. She is a sea witch who "helps" unfortunate merfolk by granting their wishes, but end up withering them into polyps for her gardens. Her appearance's an obese purple-skinned, white-haired female Cecaelian. Her character has been compared to "Madame Medusa" from The Rescuers" in terms of style, dramatics, and choice of minions.

During planning for the film, she was not originally designed as a Cecaelia. It was thought that she would be another sea creature, such as a rockfish. The production team then saw a documentary about octopuses, and decided that their multiple arms and overall imposing appearance would be perfect for the character they were creating. Ursula is only drawn with six tentacles, due to the studio's budget and difficulty in coordinating eight tentacles. Her basic look was based on the drag performer Divine.

Pat Carroll, who was cast as the voice, envisioned the character as "part Shakespearean actress, with all the flair, flamboyance and theatricality, and part used-car salesman with a touch of con artist". Carroll, who is a contralto, deliberately deepened her voice for the role.

When she first appears in the film, she states through monologue that she once lived in the royal palace of King Triton, the king of the underwater city of Atlantica. She was banished from Atlantica and made her home in the remains of a leviathan where she waits the chance to get her revenge on Triton and become Queen of Atlantica.

The entrance to Ursula's leviathan home is lined with a garden of writhing polyps which were merfolk who had been previously gone to Ursula for help, but found themselves unable to fulfill their side of the bargain, leading Ursula to claim them as her own and added them to her collection. The garden of polyps are part of the original fairytale, but are simply guards of the way to the sea witch's home, and not condemned merfolk.