This Jungle Book Shere Khan original production cel captures the classic George Sanders-voiced character when Baloo has caught a tiger by its tail!

From Disney's wiki page for Shere Khan: Shere Khan is the main antagonist of Disney's 1967 animated feature film, The Jungle Book and the 2003 sequel. A powerful Bengal tiger, Shere Khan is considered suave and charming, yet is deeply feared as the most ferocious predator in the jungle. His reputation was such that he needed only to show himself to intimidate his victims. Khan is equally notorious for his animosity toward man, due to his fear of guns and fire. As such, he has vowed to kill any human that steps foot in the jungle. 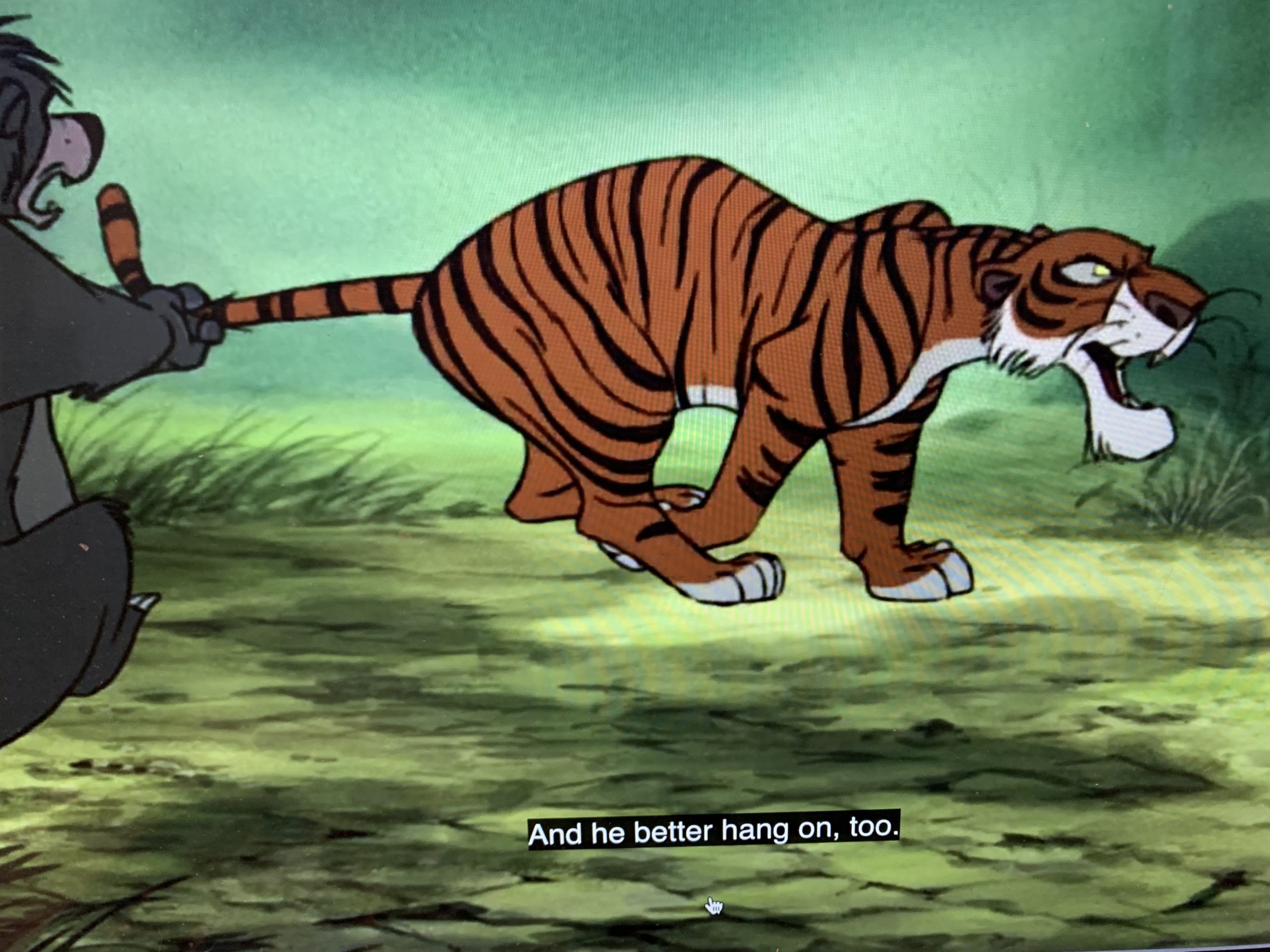 This is a screen cap from the feature film at around 1:08 minutes into the film. Baloo has Shere Khan by the tail, and the production cel is from when he is circling around as above.

The Jungle Book is a 1967 American animated musical comedy film produced by Walt Disney Productions. Based on Rudyard Kipling's 1894 book of the same name, it is the 19th Disney animated feature film. Directed by Wolfgang Reitherman, it was the last film to be produced by Walt Disney, who died during its production. The plot follows Mowgli, a feral child raised in the Indian jungle by wolves, as his friends Bagheera the panther and Baloo the bear try to convince him to leave the jungle before the evil tiger Shere Khan arrives.

The early versions of both the screenplay and the soundtrack followed Kipling's work more closely, with a dramatic, dark, and sinister tone which Disney did not want in his family film, leading to writer Bill Peet and songwriter Terry Gilkyson being replaced. The casting employed famous actors and musicians Phil Harris, Sebastian Cabot, George Sanders and Louis Prima, as well as Disney regulars such as Sterling Holloway, J. Pat O'Malley and Verna Felton, and the director's son, Bruce Reitherman, as Mowgli.

The Jungle Book was released on October 18, 1967, to positive reception, with acclaim for its soundtrack, featuring five songs by the Sherman Brothers and one by Gilkyson, "The Bare Necessities". The film initially became Disney's second-highest-grossing animated film in the United States and Canada, and was also successful during its re-releases. The film was also successful throughout the world, becoming Germany's highest-grossing film by number of admissions. Disney released a live-action adaptation in 1994 and an animated sequel, The Jungle Book 2, in 2003; a live-action/CGI hybrid remake directed by Jon Favreau was released in 2016, with a sequel to that film in development.