Here's a great image of Homer Simpson, a completely painted cel, which is extremely rare, and of course it's a great, colorful, original production cel that will light up any room! Perfect for a Simpson fan!! 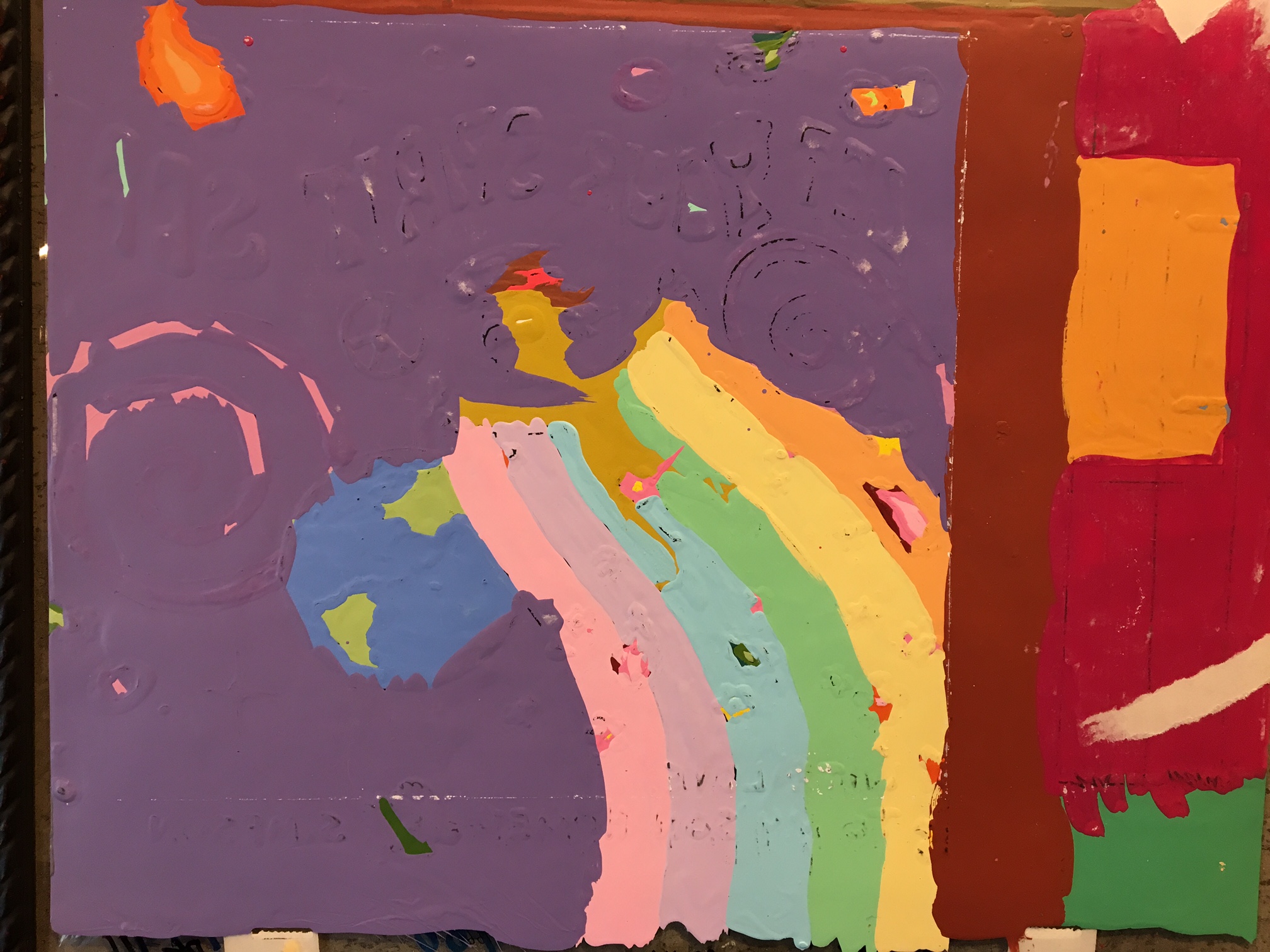 the back of the cel showing the paint.[/caption]

D'oh-in' in the Wind is the sixth episode of Season 10.

Homer sets out to determine what his middle initial stands for. In the process, he meets with two of his mother's old associates from her days as a radical in the 60s and plans to give the hippie lifestyle a try.

Donick Cary wrote the episode after he got the idea where the town gets high and pitched it to the writing staff. This is the second Simpsons episode (after "Flaming Moe's" in 1991) to feature two directors instead of one.

The Woodstock flashback sequence features Jimi Hendrix's performance of 'The Star-Spangled Banner.' Homer also sings Billy Joel's 'Uptown Girl' during the episode, and reprises the song over the end credits theme, performed by Yo La Tengo in psychedelic homage to The Beatles' 'Tomorrow Never Knows.' As the music ends, Homer says "I buried Flanders" -- another Beatles reference, this time to late-1960s rumors of Paul McCartney's death.

Homer Jay Simpson is a fictional character and the main protagonist of the American animated television series The Simpsons as the patriarch of the eponymous family. He is voiced by Dan Castellaneta and first appeared on television, along with the rest of his family, in The Tracey Ullman Show short "Good Night" on April 19, 1987. Homer was created and designed by cartoonist Matt Groening while he was waiting in the lobby of James L. Brooks' office. Groening had been called to pitch a series of shorts based on his comic strip Life in Hell but instead decided to create a new set of characters. He named the character after his father, Homer Groening. After appearing for three seasons on The Tracey Ullman Show, the Simpson family got their own series on Fox that debuted December 17, 1989.

Homer and his wife Marge have three children: Bart, Lisa, and Maggie. As the family's provider, he works at the Springfield Nuclear Power Plant as safety inspector. Homer embodies several American working class stereotypes: he is a crude, bald, obese, short-tempered, neglectful of the rules, clumsy, lazy, heavy drinking, ignorant and idiotic person; however, he is essentially a decent man and fiercely devoted to his family, often ignoring his own personal interests for those of his family. Examples include working long hours in order to buy Lisa a horse, dealing with Marge's sisters when they come over, moving back to Springfield instead of staying in a job he loves, getting Bart a ride back to Springfield after getting stranded during spring break, going to Lisa's band concerts, and giving up his love of pork chop night in order to take his family out on town to try something they like. Despite the suburban blue-collar routine of his life, he has had a number of remarkable experiences, including going to space, climbing the tallest mountain in Springfield by himself, making a movie with Mel Gibson, fighting President George H. W. Bush, fighting in professional boxing and earning a shot at the heavyweight title, and winning a Grammy Award.