Here's a great pair of images used in the making of Mulan, for fans who love concept art and appreciate all the artistry involved in a finished Disney film! 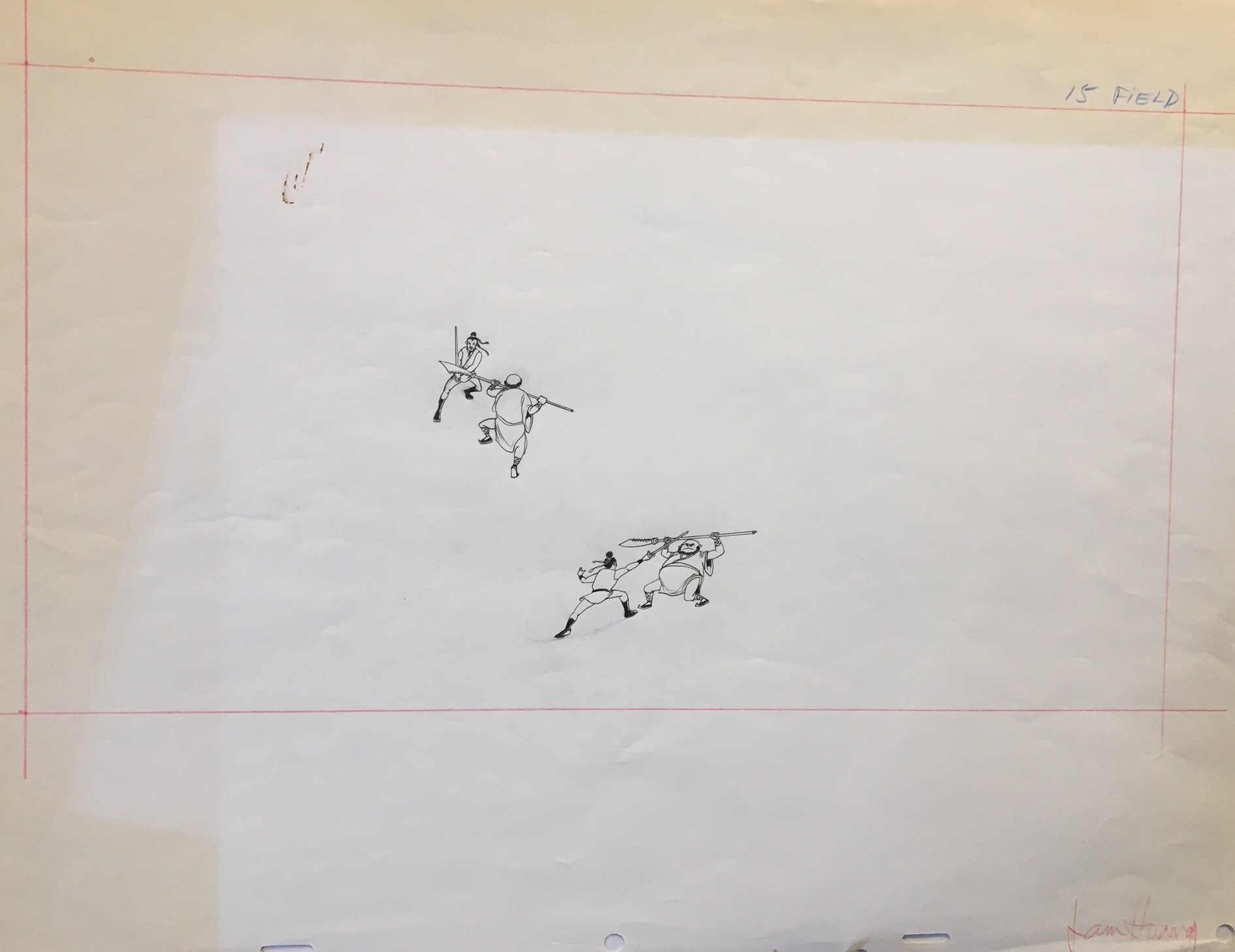 There are two pieces, one that belongs on top of the other, with the gorgeous, complicated image and characters that are placed on top...This is attributed to Disney artist Lan Huang.

Mulan is a 1998 American animated musical action comedy-drama film produced by Walt Disney Feature Animation for Walt Disney Pictures. It is based on the Chinese legend of Hua Mulan, and was Disney's 36th animated feature. It was directed by Tony Bancroftand Barry Cook, with story by Robert D. San Souci and screenplay by Rita Hsiao, Philip LaZebnik, Chris Sanders, Eugenia Bostwick-Singer, and Raymond Singer. Ming-Na, Eddie Murphy, Miguel Ferrer and B. D. Wong star in the English version, while Jackie Chanprovided the voice of Captain Li Shang for the Chinese dubs of the film. The film's plot takes place during the Han dynasty, where Fa Mulan, daughter of aged warrior Fa Zhou, impersonates a man to take her father's place during a general conscription to counter a Hun invasion.

Released during the Disney Renaissance, Mulan was the first of three features produced primarily at the Disney animation studio at Disney-MGM Studios in Orlando, Florida. Development for the film began in 1994, when a number of artistic supervisors were sent to China to receive artistic and cultural inspiration. Mulan was well received by critics and the public, grossing $304 million, earning Golden Globe and Academy Award nominations, and winning several Annie Awards including Best Animated Feature. A 2004 direct-to-video sequel, Mulan II, followed. A live-action adaptation of the film directed by Niki Caro was originally scheduled for November 2, 2018, but was later pushed into a unmarked date release in North America.

In 1989, Walt Disney Feature Animation Florida had opened with 40 to 50 employees, with its original purpose to produce cartoon shorts and featurettes. However, by late 1993, following several animation duties on Beauty and the Beast, Aladdin, and The Lion King, Disney executives were convinced to allow the Feature Animation Florida studios to produce their first independent film. Around that same time, Disney Feature Animation developed an interest into Asian-themed legends beginning with the optioning several books by children's book author Robert D. San Souci who had a consulting relationship with Disney executive Jay Dyer. Around that same time, a short straight-to-video film titled "China Doll" about an oppressed and miserable Chinese girl who is whisked away by a British Prince Charming to happiness in the West was in development. Thomas Schumacherasked Souci if he had any additional stories, in which Souci turned in a manuscript of a book based on the Chinese poem "The Song of Fa Mu Lan". Ultimately, Disney decided to combine the two separate projects.

Following the opening of the Feature Animation Florida studios, Barry Cook, who had served as a special-effects animator department since 1982, had directed the Roger Rabbitcartoon Trail Mix-Up produced at the satellite studio. Upon a lunch invitation with Thomas Schumacher, Cook was offered two projects in development: a Scottish folk tale with a dragon or Mulan. Knowledgeable about the existence of dragons in Chinese mythology, Cook suggested adding a dragon to Mulan, in which a week later, Schumacher urged Cook to drop the Scottish project and accept Mulan as his next project. Following this, Cook was immediately assigned as the initial director of the project, and cited influences from Charlie Chaplin and David Lean during production.[12] While working as a supervising animator on the gargoyles on The Hunchback of Notre Dame, Tony Bancroft was offered to co-direct the film following a recommendation from Rob Minkoff, co-director of The Lion King, to Schumacher, in which he accepted, and joined the creative team by early 1995.

Development for Mulan began in 1994, after the production team sent a select group of artistic supervisors to China for three weeks to take photographs and drawings of local landmarks for inspiration; and to soak up local culture. Key members of the creative team at the time – Pam Coats, Barry Cook, Ric Sluiter, Robert Walker, and Mark Henn – were invited to travel to China as a research trip to study the landscape, people, and history of the original legend. From June 17 to July 2, 1994, the research trip flew to Beijing, China, which is where Pam Coats became inspired by the placement of flags on the Great Wall, Datong, Luoyang, Xi'an, Jiayuguan, Dunhuang, and Guilin.