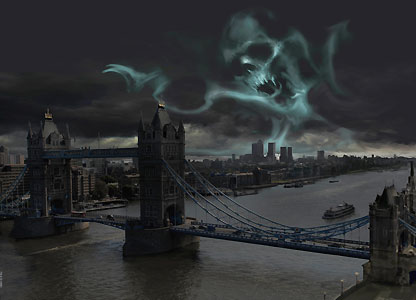 ArtInsights, the animation and film art gallery that represents the official art of Harry Potter, announces the release of new limited edition prints based on concept art for the Harry Potter film series, images designed and and signed by Harry Potter production designer Stuart Craig, and illustrated by concept artist Andrew Williamson.  Originally selected for the opening of the Warner Brothers Harry Potter Studio Tour at Leavesden, these images are now being released to fans on this side of the Atlantic.
The release includes Making a Great Exit (the Weasley twins flying through the great hall), Dark Mark Over London, Creating Hogwarts & The Black Lake, Creating Hogsmeade, Escape on the Dragon, The Twins Depart, (another great twins piece) and Journey on The Hogwarts Express.  This art has been so popular in London that the Journey on The Hogwarts Express and Dark Mark pieces are already almost sold out.  There has already been much interest and support here as well, as exampled by the fan reaction and sales at the premiere at Leakycon 2012. 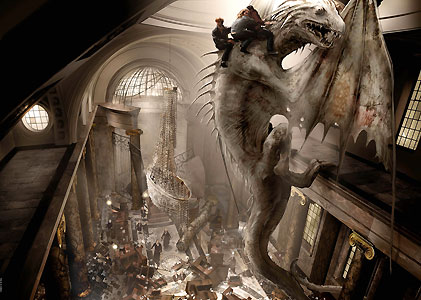 ArtInsights, located in the Washington DC area, is a gallery that has been representing Harry Potter art released through Warner Brothers since 2000. These images were hand selected to represent the art of the successful film series at the opening of the Warner Brothers Studio tour London-Making of Harry Potter, and now are available online and through contacting the gallery.
“It is exciting that the film art made available for sale when the Leavesden Studio Tour opened has been appreciated and is being purchased by fans who visit.  Says ArtInsights owner Leslie Combemale,.  “It means film art is being seen more as a real art, not just as a means to an end.  Stuart Craig deserves a lot of credit for the visual beauty and success of the Potter series.  How wonderful that fans obviously not only know who he is, but truly appreciate his role in making the films so extraordinary.”
Undoubtedly the tales of Harry Potter and his adventures at Hogwarts comprise some of the most alluring fiction to date.  This fiction has been brought to life onscreen for a new generation of film fans and the last installment is receiving overwhelmingly positive reviews from fans and critics alike.  Stuart Craig, who has received Oscars for Gandhi, The English Patient, and Dangerous Liaisons, as well as numerous English BAFTAs for the Harry Potter series, has been responsible for the entire look of the films, and as part of that has drawn hundreds of drawings to guide the creation of the illustrations by his art department.
These exclusive pieces are an important addition to the collection of Harry Potter fine art images spanning the book series and films that have been previously released.  This film art connects the collectors with the design and development of some of their favorite scenes and moments from the movie series, evoking in the viewer the same excitement that comes from the pen of Harry Potter author J.K. Rowling.
For more information or more images, visit the ArtInsights website, at
www.artinsights.com.