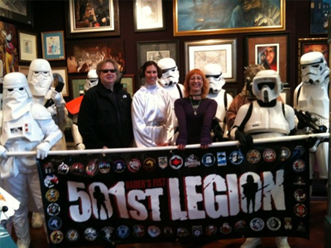 Jedi knights, stormtroopers, Disney princesses, wizards and witches, instead of sugar plums are dancing in my head…

(or HOLIDAYS AT ARTINSIGHTS)

The last two months of the year have been blowing by so fast i can hardly catch my breath.  It’s been so long since i’ve visited or called, my family thinks i have a drug problem (which, if you count caffeine, i do, and if addiction to it is wrong, i don’t want to be right…) and my friends think i’ve dropped them all because i’m now “an old married woman”.  Gah!  I tell them to think of me as being in graduate school–(otherwise known as Apple one-to-one) so i can learn how to make a better web magazine–which means learning to build a website and become a film editor!

Actually we’ve been very busy working on our new website and making it different than anything else out there, somewhere people can buy art, learn about the artists, with educational and informative specials like our upcoming interview with Stuart Craig, the production designer for all the Harry Potter movies!  I’ve also been working on our press credentials so we can be in the center of new movie releases, get interviews and expand awareness of all things movie art.

With the sell out of the Mad Hatter limited edition from Alice in Wonderland, i feel the world of film art and the acceptance of it as authentic and worthy art is beginning to happen, and since i was at the beginning of animation art being considered real art, which only really happened about 15 years ago, i think i see the light at the end of the tunnel, and it’s a love train for production and interpretive movie art.

Obviously we still love and sell animation art, but we are only willing to represent art we can trace and authenticate from the minute it left the studio, and that’s getting harder to do since a few folks out there are doing unnecessary restoration–we REALLY want to educate our clients what to look for and how to proceed and genuinely believe this will lead to more loyalty by our clients.  It’s worked so far!

So now the task and labor of love is to build together the informative and fun side of our site– that we hope will excite and inspire film animation and illustration art fans and really just fans of film in general enough to keep seeing movies new and classic, to allow it to enhance and inform our lives in a positive way–with the gallery side, which eventually will have quite a diverse collection of art and a growing collection of artists exclusive to us as well as the artists who have been at the top of their field and collectors already know about.   We always have tons of art that’s not on the site, so call us if you’re looking for something for the holidays that’s special and exciting.  We have been doing a ton of commissions this year and we are proud of the number of amazing artists who are working with us or we are planning to partner with in the near future!

We are very serious about believing education and information (in the form of our web magazine) will expand our horizons and our loyal clientele.  And we’re having fun!  Speaking of fun, as I am getting my press credentials together i actually got to interview the aforementioned Stuart Craig, 3 TIME OSCAR WINNER for Dangerous Liaisons, The English Patient, and Gandhi who i called in England and spoke to for an hour–and let me tell you i was extremely nervous!  I had one day to prepare and so thank goddess i’d already seen all his movies (except one movie named Saturn something or another..) It all turned out all right, AMAZING in fact! and i’m typing up our interview and i’ll also have a recording of it as a podcast.

All that did was make me thirsty to do more interviews and educational series pieces so we’re working on some more and on getting more artists involved with it!

For one thing, as a retail person for the last 23 years, I carry an ipod with me everywhere right now so i don’t have to hear traditional holiday music.  We have more than 1000 holiday songs on our computer and yet we only play them from the 21st to the 24th.  The rest of the time we play what i’ve compiled as on the edge, non-traditional yet lovely songs that give visitors that warm fuzzy feeling.  I’m going to be starting a playlist on December 1st and adding one song a day of songs from that list for those of you who want something different to listen to!

(because sadly, there’s no “Rage Against The Machine” or “Nine Inch Nails” Christmas album…)

Also, we are open on Sundays and stay open late when there are folks around.

Because this is the time when almost everyone who comes in the gallery says “Wow!”  and “This is the coolest place ever!” and lovely things along those lines. I’m not going to go through days where people ask “Is there a REAL art gallery in this center” and not lap up this enthusiastic appreciation like a st. bernard!

and we also seem to get our very best vintage Disney art at around the last week of November, i maintain this is because some collectors want to get stuff even crazier and more awesome than the stuff they show me (like key set ups? stuff I think is the rarest of the rare!  but go team!)  So i get gorgeous art and my collectors get to see stuff they never see, get a chance to buy stuff they never have normal access to, and so i have to find the perfect homes for them.

Examples?  A 6 sheet from The Reluctant Dragon in great condition.  that’s 81 x 81 inches.  Or art i’m getting that has an original background by Claude Coats from Lady and the Tramp.  I love this time of year!!

We put together a show of both Star Wars and Harry Potter art because we love the 501st (that’s the group of stormtroopers and Darths who do charity events in costume..) and they support Toys for Tots so we wanted to do a show where we donated a percentage to that–consequently we had our friend and intern Zabrina dress like Princess Leia and marched in the holiday parade with them and they were an amazing hit, as you’d expect…as many adults get giddy as kids around them, and if you can’t find something to be giddy about during the holidays, you’d better hunker down in your hovel with a pup named Max and start planning your midnight attack on Whoville.

and our friends at the HP Alliance have been doing such an amazing job we wanted to support them with the movie coming out so a percentage of profits from that art is going to them.

The Reston Town Center looks amazing during the holidays and i really don’t think there’s anywhere quite as pretty as shopping centers go–So if you live anywhere near us, come visit during the holidays.  You won’t hear Perry Como or Brenda Lee, but you will have a warm fuzzy experience and i’ll love seeing you, whether you’re old or new to us.