Holidays at Reston, New Shows, Costumes.  Yeah.  We have fun!

Just came back from playing Belle in the Reston Town Center holiday parade.  I asked by sister Coco to play Cinderella.  She looks so much like her, she could be hired at Disney.  We also had the 501st Legion with us in the parade, and they are always wonderful to have–helpful, very interested in charity (we love that!)… 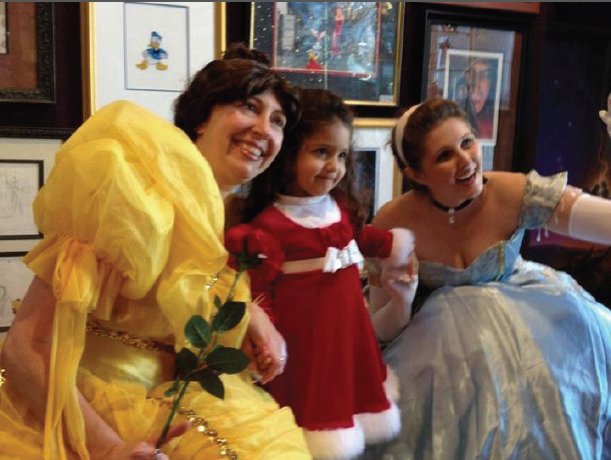 I’ve played Snow White (there are pictures…), Maleficent, the Queen from Snow White, Cruella, A fictitious professor at Hogwarts, a pirate on Jack Sparrow’s ship, Princess Leia, the Grinch, Bugs Bunny, and now, Belle from Beauty and the Beast.

Just when you wonder what good going to the Royal Academy of Dramatic Art in England will do…since when I dress as Snow White I look not a little like a drag queen I have discovered kids just love princesses, and they won’t notice that instead of 15 she might look around 35.  Today as Belle I get spontaneous hus Bless them, I say…

We have been so busy this year we haven’t had time to update what we’ve been doing on this blog, but let’s just say we’ve spent lots of time out at conventions and special events…

I was at the Harry Potter premiere in London for the very last movie and walked a red carpet that is now in the Guinness Book of World Records for its length.

We had our very first panel for The Art of the Hollywood Movie Poster at the San Diego Comic Convention.  (it went so well we had folks who had sat in on other panels just to be able to get into ours!! a great sign!)

We were also at Leakycon, went to Paris and the South of France to visit animators and go to a family reunion, and went to D23, where we were the only ones who had ONLY original art by Disney interpretive artists.

I’ll tell more when I ever write “ArtInsights: The World Tour”.

All of it went incredibly well, and we’ve had our best year so far!

We have big new things in store, and have plans to work with more wonderful artists we met on our travels, but just getting through the year doing what we planned was amazing!

We haven’t been actively open as much this year, because we’ve been gone so much so for those of you interested in visiting us, give a call and make sure we aren’t off somewhere doing ambassador stuff for the art of film, or visiting John Alvin’s wife Andrea, or some such fun thing, because we’d love to see you!

Meanwhile, one of the big additions to our offering (and workload!) is we started including movie reviews on our web magazine more and more, and Cinema Siren is featured on Patch now, not just a few favorite Patches, (like Herndon.patch.com and rosehill.patch.com, both of which are edited by good friends) but often we are featured on tons of Patches all over Northern Virginia and Maryland, and we’ve had up to 200,000 people read one review so far.  Should we aim for a million???

Not sure where that will take us, but we know it will expand awareness of film art, which is good, since it takes a long time to write them, and we take it seriously!

We are just finishing up the opening of Chuck Jones’s 100th Birthday kick-off, (an honor from the family) and we were involved in the first Washington West film festival (I was a juror) and we represented Chuck’s family at the festival.  I also voted for some amazing animated films and met some great film makers.

We’ve interviewed some great artists this year, and covered some great events (like the Harry Potter premiere!) and look forward to doing that more and more!

Our big new deal this December is some John Alvin art we’ve actually been authorized to sell for his estate, and we are trying to get as much of it on our site as possible.  We want also to try to change to Paypal International so we can take payments from all over the world without a headache for the clients, and so we can be assured everything gets processed smoothly for everyone.  We’ll let you know when we get all that together!

Keep checking back to see more of John’s art, like originals from Blade Runner and E.T. when he was working on the posters for those films.  VERY exciting!

New artists are joining us all the time, but we are only a few of us here, so we add them slowly!  Check back for that too.  We also have a new intern, Victory, so if she answers the phone, say hi to her, she’s a great help to us.

Lastly, if you appreciate our web magazine, my interviews, reviews, and our educational perspective, both inside the gallery and out in the world, tell the world about how wonderful we are.  That’s how we get our best clients, is through word of mouth.  Usually once people start buying from us, they find we are jolly good fun!!

Thanks and happy holidays!