I can’t believe it’s been 20 years.  These are the books that spawned a thousand ‘ships’ and fanfics, not to mention creating one of the richest women in the world, the highest paid actress, blockbuster movies, Wizard Rock, many conversations about acceptance and tolerance, kids that read voraciously for the first time, a crazy powerful fandom,  conventions that broke records and brought friends together, positive actions in the form of charities like the HP Alliance, and of course, art.

At the very beginning of the series, when it hadn’t even gotten to the states yet, my friend Ruth had interest in the series, and she paid attention to when Scholastic released them in the US, going after the license to release the art here, with all the art created by illustrator Mary GrandPre. She told me years later no one believed it would sell.  I was the first person to promote them when she announced the collection.  They were beautiful, created by a female illustrator, and celebrated reading! How could I not be excited? 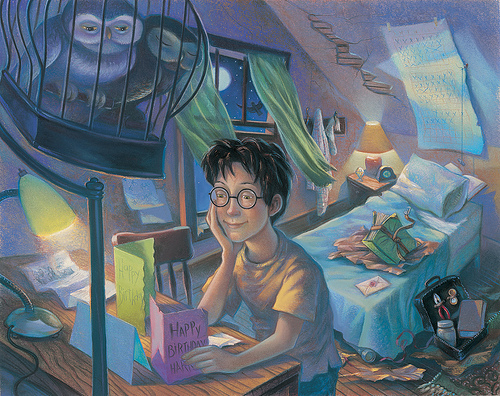 I started to work with her as much as possible, and when new pieces were released, I was the person who promoted them the most.  This led to getting some exclusive pieces for the gallery, and to being part of a number of Harry Potter fan panels at San Diego Comic-Con, where I met some wonderful friends I am close to and respect to this day.

Here is me on the panel with Darrin Criss, before he got hugely famous, but not before he had become the Harry Potter version of one of the Beatles. Seriously, there were shrieks from his fans during and after the panel, and someone proposed to him.

One of the weirdest things about being part of the Harry Potter world and selling the art, is I became a strange sort of minor celebrity in the fandom….not like the StarKids or MuggleNet or the Wizard rockers, but still, people knew who I was. After the above panel, two teenage girls came up and asked me for my autograph.  What?? I showed them where the line was to meet Darrin….but they said I was the reason they were going to study art, because they wanted to be part of creating the official art and in my various talks I’d explained about the value and importance of illustration art. It’s the one and only time it happened, but it was very sweet. It also made me feel good about what I do for a living.  I was particularly pleased when the collection of art by Mary GrandPre wound up in a Buzzfeed post and it got viewed, well, lots and lots and lots. It was posted on June 26th, as well, only in 2013!

When Leavesden was opening and they were going to have an exhibit of art and a shop with items for sale, Ruth was able to talk them into releasing art signed by Oscar-winning production designer Stuart Craig, that showed his ideas for various locations in the movies, with the fully rendered images created by architectural and movie concept artist Andrew Williamson.  Again, they didn’t think they’d sell, and again, they proved hugely popular.  Here is one of my favorites: 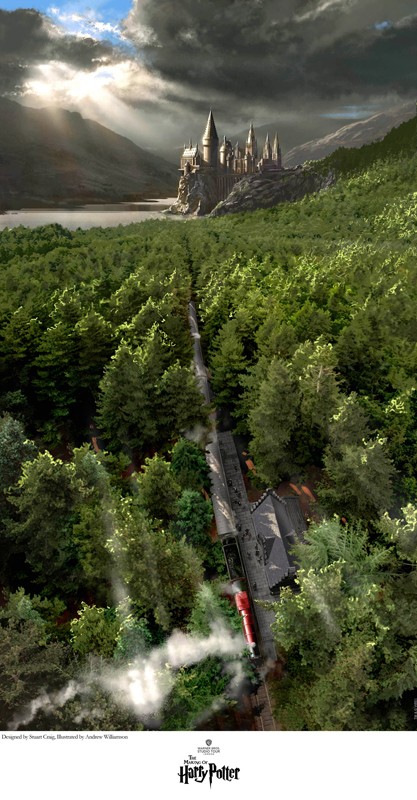 I also, in the time that HP got more and more famous, became closer friends with artist Jim Salvati, who had actually worked on the films as a concept artist, and so I got some art from him he had done for the movie.  That was incredibly exciting, and those who love the movies can really appreciate how the intensity and passion as an artist fits with the themes of the movie.  Here’s a limited edition with Harry and Hedwig: 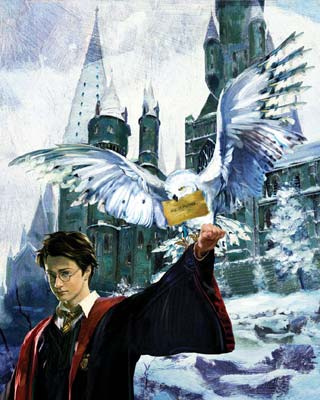 Every day I encounter some reference to HP, or think of one.  This morning on my walk, I was going to once again avoid the walking tunnel that goes under a big road because it looks creepy, dangerous, and frankly, it reminds me of Death Eaters.  Today, though, I ran through it in honor of the anniversary (crazy, but what can I say?) and as I checked my fitbit, the number was 7,777.

I had to laugh.

Thanks, Jo.  You’ve inspired millions of kids to read, write, draw, find acceptance, and aspire to more.  We’ll keep reading the books, watching the movies, writing the fanfic, and creating art, and when we do, we’ll think of you, and of Harry, the boy who lived.

ps. If you want to see all the official art of Harry Potter available for purchase, go HERE.