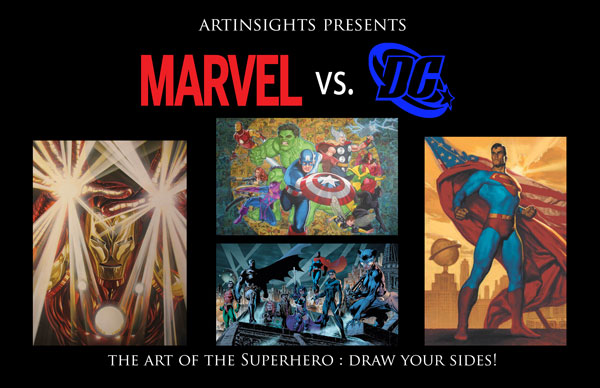 Marvel? or DC? That’s an age-old question. Well, we love them both (a lot) and as a result, we have a ton of amazing superhero art that we want to show you! We thought, what better time to host a Marvel vs. DC show than this summer–what with Iron Man 3 and Man of Steel being released…

The show will feature animation cels as well as artwork by Jim Lee, Bruce Timm, Randy Martinez, Glen Orbik, and more. Some pieces are signed by Stan Lee, and that is pretty neat. Also, we have never-before-seen works from Alex Ross–including an exclusive pre-release Batman painting.

We’re so excited about the show that we’re even throwing a party. (You’re invited obviously.) It’s going to be on Friday June 7th from 6 to 9 PM, to celebrate the opening of the show. There will be music and lights and art and good times. Plus, if you dress up as a superhero (or villain), there’s a chance that you’ll win a cool  prize.

Don’t miss the show! Make sure you visit us at 11921 Freedom Drive in Reston Town Center between June 7th and July 7th.