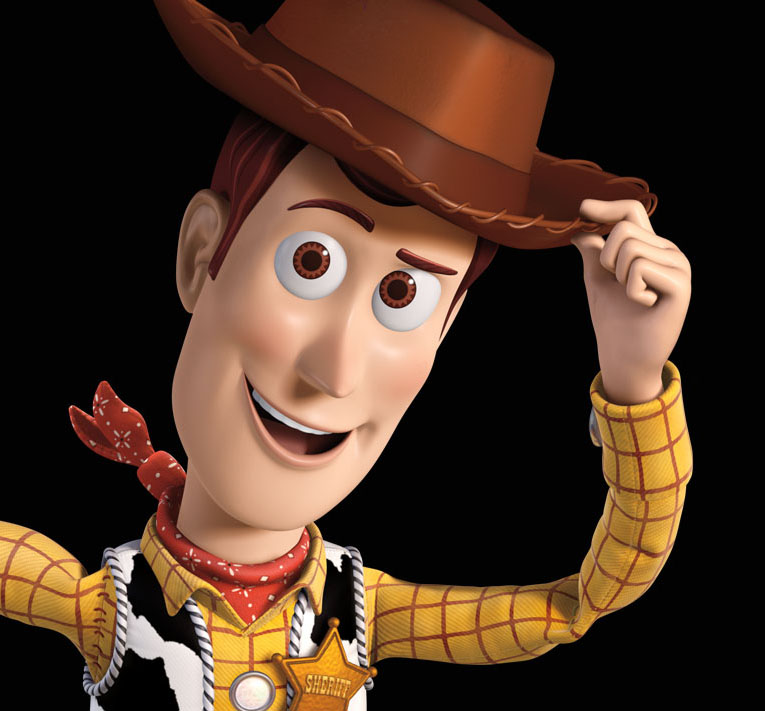 One of the main protagonists of the Toy Story trilogy, Woody is one of many toys belonging to a young boy named Andy. He has been Andy's favorite toy since kindergarten, with a special spot on the bed, and is the leader of the toys in Andy's room.

Woody is an old-fashioned pull-string cowboy doll. The voice-box that is activated by the pull-string says many simple phrases such as "Reach for the sky!", "You're my favorite deputy!", "There's a snake in my boot!", and "Somebody's poisoned the waterhole!". As mentioned in Toy Story 2, his construction includes an "original hand-painted face, natural dyed-blanket stitched vest, and hand-stitched poly-vinyl hat." Woody wears an empty gun holster at his belt.

In Toy Story 2 it is hinted that he is actually quite old, being based on the main character from a popular 1950s TV show, Woody's Roundup. When Al is bargaining with Andy's mom in an attempt to take Woody, Andy's mom declines Al's bargain, stating that Woody is "an old family toy." Stinky Pete also directly refers to him as a hand-me-down toy later in the movie, and when Woody finds a record player in Al's apartment room, he states "I haven't seen one of these in ages!", again supporting that he has been around longer than Andy. (In fact, when introducing the 2009 set of Toy Story collectibles, John Lasseter said "We always imagined he was a hand-me-down to Andy from his father.") He is voiced by Tom Hanks in the films and by his brother Jim Hanks on other occasions.

In the three films, Woody makes two strong friendships with Buzz and Jessie. At first, however, when Buzz temporarily became Andy's favorite toy, Woody tried to push him off the dresser but accidentally knocked him out the window. When Sid had them, however, he and Buzz worked together to escape. Since then, he and Buzz have been very close and care deeply about each other and will do anything for each other. Woody's first encounter with Jesse was disorienting being initially exciting and fun then quickly becoming hostile. He eventually comes to understand her when she explains her past. Even though he and Jessie argue with each other sometimes, they are still very close friends. Woody is intensely loyal to Andy and loves him dearly, knowing that Andy loves his toys back.

It was revealed in August 2009 by Lee Unkrich that Woody's official last name is "Pride". Unkrich stated in his Twitter blog that “Woody’s actual full name is ‘Woody Pride’ and has been since the earliest days of developing the original Toy Story.”